The changing of a guard

Bradley may have had breakthrough 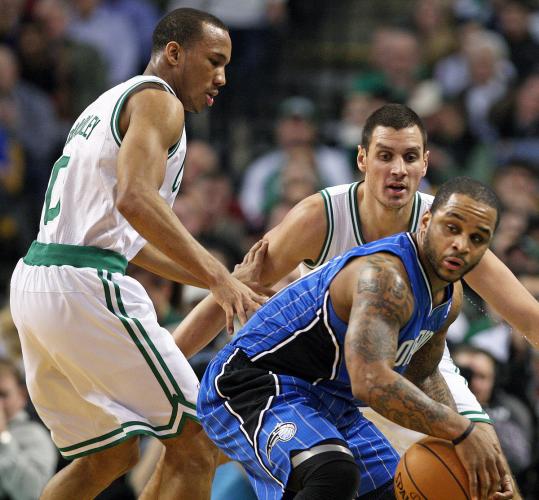 ORLANDO - The improvement has been gradual, the indications coming in small doses that Avery Bradley is becoming a contributing and dependable NBA player. They’re hardly noticeable to the average eye.

Although Bradley committed six turnovers in the Celtics’ 100-94 win over the Wizards Sunday, coach Doc Rivers lauded him for his orchestration of the offense in place of the injured Rajon Rondo. Still, he missed two key free throws and finished 1 for 8 from the field.

The raw numbers weren’t attractive, but what Rivers has been preaching about Bradley since he was drafted 19 months ago out of Texas came to fruition Monday against the Magic. There was a tangible sign of improvement, a legitimate impact on a game.

Bradley chased Orlando guard Jameer Nelson around the TD Garden floor as if the basketball Nelson dribbled was the last freshly baked chocolate chip cookie. He hounded Nelson, so much so that Nelson would whisper that Bradley didn’t need to contest him so closely or ask if this would continue the entire night.

That answer was yes.

Finally, Rivers’s hunch that Bradley would turn into an effective NBA defender, especially on the ball, was proving true. Nelson’s struggles bringing the ball up the court epitomized the Magic’s offensive malaise - they set team records for fewest points in a game (56) and a half (20) - and Bradley finally put his imprint on a victory.

It was a rewarding performance for a player who has worked feverishly to improve but hasn’t had many tangible results.

Asked whether full-court pressure was Rivers’s game plan, Bradley said, “It really wasn’t. But I told Doc, ‘I’m going to pick him up the whole game.’ And he kind of looked at me like, ‘The whole game?’ And I was like, ‘Yeah, the whole game.’

Bradley’s emergence is a surprise considering he contributed little last season after having ankle surgery. And he is a work in progress offensively. His jump shot is sporadic, and Rivers understands that he is not a natural point guard.

Bradley is a shooting guard without pure scoring skills, making his adjustment to the regimented NBA more difficult. Players without true positions historically are slow to make the transition. But Bradley is a shining example of methodical progress, and the Celtics are beginning to reap the benefits.

“You know what? He’s not trying to score anymore,’’ Rivers said. “He’s trying to run the team and play defense and he lets it come to him.

“It’s a great lesson for him. When he’s trying to score, he gets himself in trouble. When he just lets basketball come to him, he’s pretty good.’’

Confidence has been a challenge for Bradley, especially since he began his NBA career without a summer league or full training camp because of a broken bone in his left ankle. He was limited to 31 games as a rookie, seeing extensive time only in the meaningless season finale against the Knicks, when he scored 20 points.

His role was expanded slightly this season because the Celtics are in such dire need of youth and athleticism, but an unexpected injury to Keyon Dooling has allowed Bradley to garner more minutes. And Rondo sprained his right wrist a week ago against the Raptors, Bradley was pressed into starting duty.

So far, he is averaging 6.3 points, 3.6 assists, and 4.6 rebounds. Monday’s game may have been critical to his progress.

“Being on a team with this many Hall of Famers, this many All-Stars, I stay asking questions all the time,’’ he said. “Rondo is a great point guard to me. Everything I watch him do, I want to learn everything from him.

“I definitely need to improve on talking a little more on offense and defense, but that comes with my experience. My teammates, even when they talk to me, they encourage me to keep talking to them on defense and offense, and that’s what I try to do - I try to improve on every aspect of my game.’’

While his development has been moderate at times, Bradley’s overall game is being noticed by at least one player who entered the league when Bradley was in grade school.

“I think he’s one of the best on-ball defenders in the game,’’ said Jermaine O’Neal. “You don’t see that.

“I know he’s young, but still it’s hard to guard that ball the way he guards it from baseline to baseline. He was really the head of the defense [Monday].

“I think he can make a really good living in this league in the way he’s playing. When things begin to slow down for him, you’re really going to be able to see that.’’