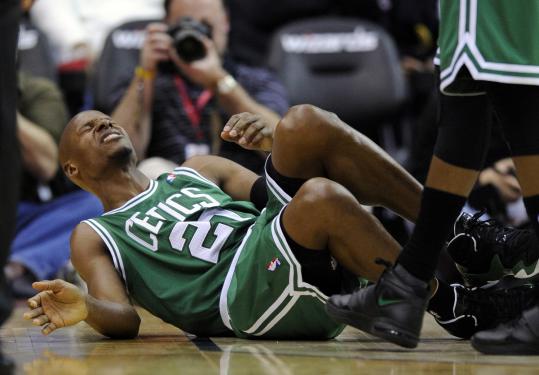 WASHINGTON - The good news for the Celtics after yesterday’s 100-94 win over the Wizards was that Ray Allen sported an immaculately shined wingtip shoe on his left foot instead of a walking boot.

Allen left in the second quarter with what the team termed a “jammed’’ left ankle, and X-rays were negative.

Allen said he will try to play tonight against the Magic at TD Garden, but his status is uncertain.

Allen was hit three times on screens by Washington’s Jan Vesely, a rookie from the Czech Republic. The third time Allen rolled the ankle and crumpled to the floor. He was helped off the court by trainer Ed Lacerte, walking gingerly to the locker room with 6:36 left in the second quarter.

He contemplated a second-half return, but said there was too much “tightness’’ in the foot.

“Right now there’s pain in the back of the ankle,’’ he said. “If I had my druthers, I would have tried to come back out on the floor and try to work through it.

“It feels better, but we’ll see by [today]. It was the way [Vesely] was setting screens. He was stepping out and extending and every time I tried to go around it, his foot was in the way, so it just seemed like a train wreck waiting to happen.’’

Tonight will mark another return of a former Celtic, but Glen Davis’s comeback game likely won’t be as emotional as it was for Kendrick Perkins Jan. 16. Davis returns to Boston as a member of the Magic. Davis signed a four-year, $26 million extension after the Celtics traded him along with Von Wafer for Brandon Bass.

The Celtics love Bass’s production so far (11.5 points, 6.4 rebounds), while Davis is averaging 7.9 points, 5.1 rebounds, and is shooting just 37.5 percent from the field in 15 games off the bench. He recently received a technical foul for pulling down his trunks after being whistled for a foul. And after averaging 3.4 free throws per game last season, Davis is attempting two per game this season.

“I don’t know, I hope so, I hope they give me love,’’ Davis told Orlando-area reporters yesterday. “I was there for a long time. I think they will. I will probably get some boos. Wherever the situation was [right], that’s where I was going.’’

Celtics fans welcomed Perkins back warmly because his trade was so unpopular. Davis, however, produced poorly last season and his uneven play was one of the reasons the Celtics didn’t push him to re-sign him.

“If they play a video [tribute] or something, it will be kind of a [tearjerker],’’ he said. “I don’t think I’ll cry if they cheer, but if they play that song, ‘I Remember You,’ I mean that’s a sad song, who doesn’t cry over that?’’

Once again Chris Wilcox and Keyon Dooling were not available, although they made the trip. Wilcox has missed five straight games with a sore left calf and Dooling has missed six straight with a sore right knee . . . With Nick Young burning rookie E’Twaun Moore offensively, coach Doc Rivers opted for little-used Sasha Pavlovic for a four-minute stretch. He had not played since a 1-minute stint Jan. 6. After playing 61 minutes in the first four games, Pavlovic has played 13 minutes in the past 11 games . . . The Celtics scored at least 20 points in each quarter for the first time in nine games, Jan. 2 against the Wizards at the Garden.