All fouled up at the line? This specialist can help 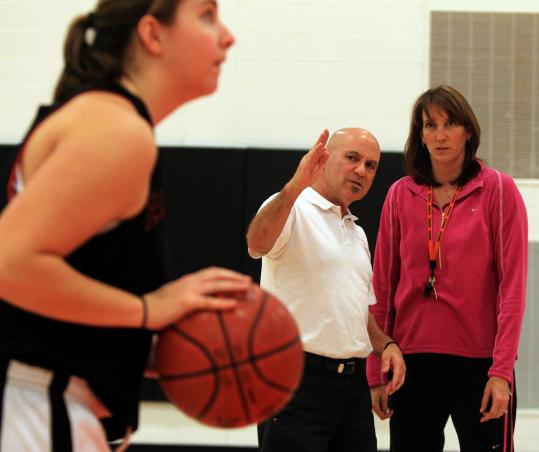 The Celtics’ two-time All-Star was shooting just 59.3 percent from the line this season entering last night’s game, last among point guards in the NBA.

“It drives me nuts how many good players making millions of dollars can’t make a very simple and easy shot,’’ said Carlson, a free throw specialist who has helped Davidson College become the nation’s top-shooting team at the line at 80.9 percent.

“That’s what propelled me to do this,’’ said Carlson. “I was blown away by the fact that there’s been no improvement. Why is there all this improvement in all these other sports, like swimming and track and field, and no improvement in foul shooting?’’

Part of the problem is that coaches often treat free throws as an afterthought, something tacked on to the end of practice. Make the last shot and avoid running suicide drills.

“It’s something that’s given short shrift,’’ said Carlson. “Players by and large are left to do it on their own, whatever way they want.’’

So two years ago he started Automatic Free Throws, a program that guarantees success.

Carlson’s approach is simple. He has a checklist that covers location, focus point, rhythm, posture, and confidence in making the 15-foot shot.

Carlson, 58, is an unlikely basketball savior. In the early 1970s, he was a 5-foot-6 3/4-inch backup point guard for Stonehill College. Today, he edits documentary films and television shows in the Boston area. Teaching free throw shooting, he said, is “a labor of love.’’

He also adds a dash of “Red on Roundball’’ and some of his own psychological theories into the mix. Carlson says free throw shooting is one-third mechanics, one-third pre-shot routine, and one-third positive thinking.

“It’s the only time in basketball where play is stopped and this athlete is like an actor on stage,’’ he said. “He has to get up there and try and stand still and perform. That’s contrary to the rest of the game, which is moving.’’

According to a 1995 Journal of Sport Behavior report, in games decided by 9 points or less, free throws constituted 69 percent of the winning team’s points during the last minute. Carlson’s own research shows that 10 teams in the men’s 2010 Division 1 NCAA Tournament were eliminated because of poor free throw shooting. At the Final Four in Indianapolis that year, he rented a booth at the National Association of Basketball Coaches Marketplace.

But few coaches followed up. Eventually, Carlson hooked up with several colleges, including Amherst, Stonehill, and Tufts, and several high school teams. Each showed improvement.

Last week, Carlson did a volunteer evening seminar for the Newton North girls’ team. When he bricked his first two free throw attempts, some of the girls repressed giggles. Carlson claims he can still make 50 in a row.

“I’m rusty,’’ he said, after working all day on a documentary about dragons.

Nobody at the school was laughing the next night when Newton North point guard Madison Beatrice shot 6 for 6 from the line using Carlson’s system.

Nobody at Duke was laughing when Davidson shot 14 for 14 from the line and gave Duke a scare in a November game at the raucous Cameron Indoor Stadium, a temple of blue noise.

Two years ago, Davidson coach Bob McKillop heard about Carlson and flew up to Boston to meet him.

“I’m always looking for an edge,’’ said McKillop. “I felt foul shooting was one of our weaknesses. He was gracious enough to spend 2-3 hours with me. We showed significant improvement last fall and this year we are showing even more improvement.

“Hats off to Cob Carlson for giving us the impetus for becoming a very good foul shooting team. Without a doubt, he helped us.’’

But Carlson is frustrated that no one in the NBA will give him a chance, especially his beloved Celtics. His life wasn’t easy growing up a Celtics fan in Fairfield, Conn.

“By all rights, I should have been a Knicks fan,’’ he said, “but when I was in ninth grade, I read Bill Russell’s autobiography, ‘Go Up For Glory,’ and I became a Celtic fan for life.’’

For the last few years, Carlson has been desperately seeking Rondo.

“I know I can help him,’’ said Carlson. “The only thing holding Rajon Rondo back from being the top point guard in the NBA is his free throw shooting.’’

He has tried to contact Rondo directly to offer his services. He has written to Rondo’s agent, Bill Duffy, and Celtics coach Doc Rivers. He has enlisted the help of a former girlfriend, a veterinary technician who treated one of Celtics CEO Wyc Grousbeck’s dogs. He even wrote to Rondo’s mother in Louisville, Ky.

Tweak No. 1 would be keeping his eyes on the prize. Watch when Rondo steps to the line, says Carlson. He takes the ball and stares down at the parquet floor instead of looking at the rim.

“If you’re a state cop at a shooting range, you are focused at the bull’s-eye, you’re not looking at the floor,’’ said Carlson.

Out at the Celtics practice facility in Waltham Wednesday morning, a shirtless Rondo was the last player on the court, preparing for a game against the defending world champion Dallas Mavericks that night.

On his way back to the locker room, he was told that there is an expert who wants to help him.

“A few tweaks and I could be the best point guard in the league?’’ said Rondo quizzically.

Told that Davidson is currently the best Division 1 college team in the country in foul shooting and that its coach has verified Carlson’s credentials, Rondo smiles. He listens to an abridged version of Carlson’s advice.

“If it worked for Davidson College, I wouldn’t mind trying it,’’ he said. “Give me his number.’’

In the first half against the Mavericks, Rondo remembered to look at the center of the rim, and he went 8 for 10 from the line (he finished 8 for 12). Carlson watched on TV, aglow in Celtic Pride.

“Told you it works,’’ he wrote in a text message. “It breeds confidence. You can see it in his body language.’’