Context put back in place 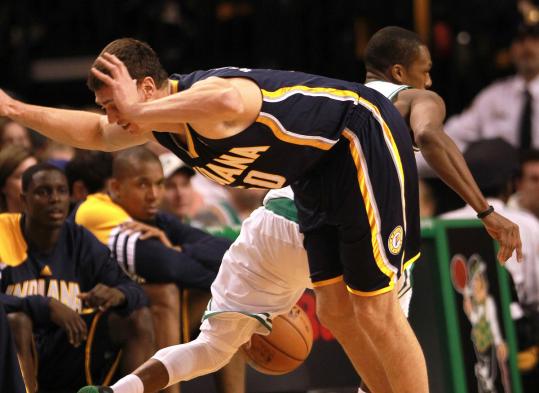 Ray Allen confirmed last night he lobbied for David West to join the Celtics, while saying, contrary to some published reports, he did not criticize West’s decision to accept an offer from the Pacers.

“Unfortunately, those comments were taken out of context,’’ Allen said before an 87-74 loss to the Pacers last night. “I was speaking in generalities, and by any means I don’t know what his situation is or was and why he made his decision.’’

West passed up a three- or four-year deal worth about $9 million annually with the Celtics to sign a two-year, $20 million contract with Indiana.

“I wasn’t referring to him going for the money, or whatever his ultimate decision was,’’ Allen said. “When it came out it disappointed me because it almost seemed as though I was bashing him for making a decision that was best for his family. I reached out to [a third-party acquaintance] - I read this article, and when I read it I was really [mad] because I don’t have anything against David. It wasn’t like he was the final straw or piece of this puzzle. It was a situation, if we can work, we can try it.

“The conversation I had with the reporter, we were talking about contractually, when guys were signing during free agency. I went through the same process: Do you sign for more money or less money? Sometimes you go after the money, sometimes you put your self in a position to make less money on a particular team.

“So those comments were made to look like I was driving him toward - by no means do I have any malice to him and his family. His situation, whatever he was going through, was best for him. He made the decision he saw fit for himself.’’

Allen said he began communicating with West while playing golf in Augusta, Ga.

“He was wondering, trying to decide how this whole process was going to work,’’ Allen said. “There was no collective bargaining agreement in place. I just told him we would love to have him if we could get him. He had a home here - the same thing I told Grant [Hill].’’

Coach Doc Rivers tried to be realistic last night after the Celtics’ loss, which ended a four-game winning streak.

“Listen, we’re a 4-4 basketball team,’’ Rivers said. “That’s what we are. You are what your record is. Make no mistake about that. I mean, one of the guys said, ‘Hey, that’s all right, we’re better than that.’ And I said, ‘No we’re not. You’re what your record says you are.’ And you always have the ability to do something about that. But, right now, Indiana is a 5-2 team and we’re a 4-4 team. That’s not who we want to be and that’s not who we’re going to be, hopefully. But, right now, that’s who we are.’’

Allen, recovered from a recent illness, returned to action after missing the Celtics’ 90-71 win over New Jersey Wednesday. “I worried about that,’’ Rivers said. “Talking to three or four other coaches, with tight games and no practice time, a guy gets sick and three or four guys get sick, that can be a three-game losing streak, that quick. I never thought I would have to be worried about that.’’