THIS STORY HAS BEEN FORMATTED FOR EASY PRINTING
Celtics 96, Pistons 85

Being at home, having Pierce help Celtics get in win column 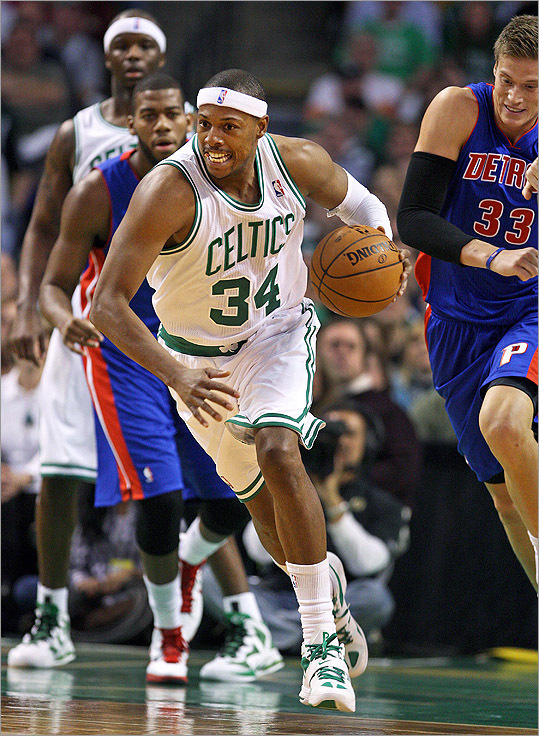 Unquestionably, there were semblances of doubt and insecurity that surfaced after the Celtics limped home Wednesday night after essentially having their pride snatched away, balled up, and discarded by the New Orleans Hornets. The Celtics spent the next 48 hours trying to disregard their disappointment at being winless.

Whether it was returning to TD Garden or Paul Pierce’s return from a heel injury or simply playing an inferior opponent, the Celtics regained the swagger and confidence that will be required to become a threat in the Eastern Conference.

Pierce made his season debut and scored 12 points and Jermaine O’Neal erased - perhaps temporarily - concerns about his value with 19 points and seven rebounds in a 96-85 Celtics victory that wasn’t as close as the score indicated.

The Celtics shot 52 percent from the field and more importantly played improved team defense as they led by as many as 25. Doc Rivers was able to clear the bench and take a deep breath following a trying opening week.

“Just having Paul on the floor, the space is so different,’’ Rivers said. “I felt bad because I took [Pistons coach and former Celtics assistant] Lawrence [Frank] out to dinner [Thursday] night and he said, ‘Is Paul playing?’ and I said there’s no chance. So Lawrence is looking like, ‘wow.’ ’’

While Pierce’s presence restored some normalcy, the Celtics also weren’t playing to their opponent’s pace because they had fallen behind. In each of the first three games they trailed by at least 17 points in the first half. The biggest deficit last night was 2, when Jonas Jerebko’s layup put the Pistons up, 15-13, with 5:39 left in the opening period. A Ray Allen jumper and free throw 75 seconds later gave the Celtics the lead for good.

The Celtics did not need a stellar night from Rajon Rondo. He produced just 9 points on 4-of-8 shooting with five assists. The rest of the team produced 20 assists. Entering the game, Rondo has amassed 31 of the Celtics’ 64 assists. The players made a concerted effort to improve ball movement.

“I just thought the New Orleans game - for whatever reason - the ball stuck in everybody’s hands, everybody was trying to win the game by themselves,’’ Rivers said. “That will never be who we are.’’

Pierce, who missed all of training camp and the first three games with a bone bruise in his right heel, scored his first bucket at the 8:54 mark on a layup and played six-plus minutes in the first period, telling Rivers after five minutes that he wanted to stay in the game. He chose to play the role of distributor and defender, waiting until the second half to put his imprint on the game.

With the Celtics holding a 50-43 halftime lead, Allen began the third quarter with a 3-pointer and then stole the ball from Greg Monroe and fed Pierce near the sideline, in front of the Pistons bench. Pierce followed with one of his customary leaning 3-pointers for a 13-point lead, which the Celtics would build to 25 later in the period.

“I was expecting to be me,’’ said Pierce, who played 23 minutes. “I don’t settle for anything less. I worked tremendously hard. I did as much as I could coming into the game other than practice. I just stayed focused. I got my shots every day.’’

While there was a high level of enthusiasm with Pierce’s return, he realized the circumstances were borderline dire. The Celtics couldn’t afford to begin 0-4 with a home loss to the lowly Pistons, especially with the Miami Heat 4-0 after another buzzer-beating win last night.

“At this point we were 0-3, so it was kind of like a business trip, we wanted to come out here and get a win,’’ he said. “Just to get back on track. I had fun on the bench when we were up and I didn’t have to go back in. I wanted to take this business-like and help my team win.’’

The emergence of O’Neal was critical. He had scored 8 points and collected 13 personal fouls through three games. He was frustrated by the officiating and he was missing countless layups and short jumpers. But similar to his team, O’Neal got untracked last night. He scored 6 points in the opening period and also was a factor defensively.

The Celtics don’t need a 19-point game from O’Neal to compete with the Heat and Chicago Bulls, but they do need a confident and engaged O’Neal to prevent opposing teams from dominating the paint.

“Playing extended minutes, you can get a rhythm, you can get a flow and you can get comfortable with what the team is doing,’’ said O’Neal after his 29-minute outing. “If you look at the first couple of games I was in and out so fast that it was almost impossible to get any flow to the game.

“It’s always fun to be back in the Garden. It’s an energy boost for us; even when we physically feel tired, the fans always find a way to give us some energy, so it feels good to get back home and get a win.’’