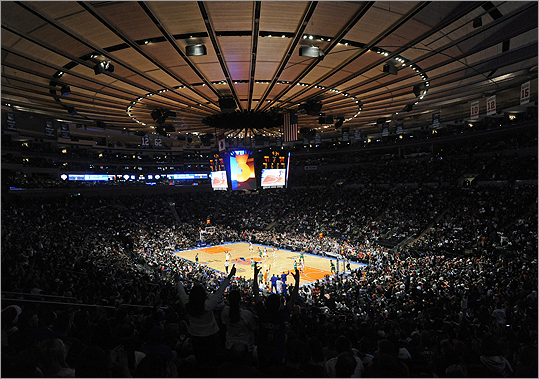 When the Celtics play their home opener tonight at the TD Garden, one thing will be clear: If fans had any pent-up anger over the lockout-delayed season, it has morphed into pent-up demand.

Less than a week into the lockout-shortened NBA season, arenas are sold out, television ratings are up, and last Sunday’s game between the Celtics and New York Knicks was the most watched Christmas Day game in cable history, with 5.9 million viewers tuning into TNT.

Through Wednesday night, 26 of 32 NBA games have taken place in arenas filled to capacity. And last week, merchandise sales at NBAStore.com were up 28 percent compared with last year. Apparel featuring recently traded players has received the strongest demand.

“No one liked the lockout when it happened, but it didn’t go on beyond the inflection point,’’ said Joe Shaker, a Celtics season ticket-holder from Needham. “It didn’t drag on long enough to where people erupted. The Pats are still playing. The Bruins got on a run. So, the average sports fan was still engaged.’’ Shaker said he didn’t think twice about renewing his season tickets.

There is far more good will in the air than there was after the longer, 204 day lockout in 1998-99. A big reason for that difference is that this year players and owners reached an agreement in time to open on Christmas, which has become something of an “NBA holiday’’ featuring key matchups.

“If we had not started on Christmas, it would’ve been a heck of a lot worse,’’ said NBA commissioner David Stern. “Christmas was the allure for both sides to sit down and get the deal done with play on Christmas something to shoot for.’’

The 149-day lockout featured bickering by players and owners over billions in revenue. During negotiations, Celtics owner Wyc Grousbeck said both sides were very aware a Christmas Day start “might minimize backlash.’’ Grousbeck added: “Part of my happiness about how it’s going in the first week is we hoped it would go this well and that’s one of the reasons we’re back playing this soon.’’

Also cause for the owners’ happiness: the 97 percent season ticket-holder renewal rate. Celtics president Rich Gotham said that the figure is as good as if not better than in years past, but that the Celtics take nothing for granted in the current environment.

After the first three weeks of individual game ticket sales, the Celtics are 40 percent ahead of where they were after three weeks of sales last year. Gotham called the increase a “good barometer that shows demand is still as strong [as] if not stronger than it’s ever been. Absence makes the heart grow fonder.’’

The organization maintained a visible local presence during the lockout. The Celtics made a point of regularly communicating and engaging with fans and sponsors. The team hosted special events like a harbor cruise for 450 season ticket-holders and a book signing with former player Shaquille O’Neal for 150 courtside club season ticket-holders. They also held community outreach events throughout Greater Boston.

For tonight’s sold-out home opener against the Detroit Pistons, Gotham said fans can expect more player-fan interaction than on a normal game night. He described the planned activities as “our way of saying thank you for hanging in there with us.’’

The fan forgiveness extends across the league, coast to coast. All five Christmas Day games sold out and each helped establish record ratings on TNT, ABC, and ESPN.

The action concluded on the West Coast with the Los Angeles Clippers versus the Golden State Warriors earning a 2.2 rating and becoming ESPN’s highest-rated Christmas Day prime-time game. The 2.2 rating represented a 77 percent increase over last year’s game in the same time slot.

The Christmas Day schedule also took advantage of major NBA storylines - a playoff rematch and rivalry renewal between the Celtics and Knicks, a Finals rematch between the Miami Heat and Dallas Mavericks, the debut of point guard Chris Paul with the Clippers.

The lockout has, however, at least one lingering downside: Local ticket brokers are seeing sluggish sales for individual Celtics games, especially for weekday games. And because of the condensed schedule, there are now more weekday games to unload. Additionally, just as with everything else in the NBA, time has been short for brokers selling seats.

Ace Ticket CEO Jim Holzman also pointed to the Bruins’ success and said those tickets “are demanding a lot of our customers’ attention now.’’ If the Celtics start winning, Holzman expects excitement and ticket sales to gain momentum.

When the NBA returned for a 50-game, lockout-shortened season in February 1999, the fallout was much more pronounced. With that lockout continuing past Christmas Day, attendance and ticket sales declined. The All-Star Game was canceled. The longer layoff, six weeks more than this season’s delay, also produced sloppier play and less interest. Crippling the league further, Michael Jordan retired from the game for a second time in January 1999.

“In 1999, we had many more fans saying, ‘Show me, show me that this is still worth following, show me that I should love this game,’ ’’ said Stern. “Now, there is a better understanding that there are business aspects here. Now, fans are saying, ‘We understand what went on here. We understand that you did what you had to do.’ ’’

Stern’s comments echo the sentiments of both Celtics executives and Celtics season ticket-holders. With the NHL losing the entire 2004-05 season because of a lockout and the NFL experiencing its own lockout earlier this year, fans increasingly view labor strife as part of the sports landscape.

NBA coach-turned ESPN broadcaster Jeff Van Gundy worked two Christmas Day games from his usual courtside perch. He described the atmosphere at both as “very positive.’’ Still, he cautions that leagues and teams should handle fan relations with care.

“Fans, for the most part, are very forgiving,’’ said Van Gundy. “I do feel, at one point, some league is going to go too far and it’s going to have a lasting negative impact on their fan base. It could be anything. It could be a labor dispute that lasts too long. It could be prices that continue to exponentially grow and even push the wealthiest fans over the tipping point.

“I don’t think we’re there yet. But even though sports have a very loyal fan base and customer base, you have to treat them with respect, too, because they are customers.’’