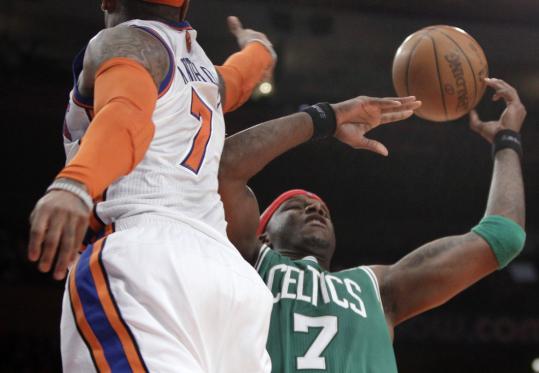 Don’t think that a return home and a blowout win over the downtrodden Pistons tonight will cure the Celtics’ many ills. That would be only a temporary treatment, because we have discovered quickly that this apparent title-contending team has a plethora of flaws.

The Celtics are 0-3 and looked uninterested and exhausted in Wednesday’s stunning 97-78 loss to the rebuilding Hornets in New Orleans.

The defeat exposed several critical differences between the old Celtics of three years ago and these old Celtics now. Opponents are hardly intimidated by the green jerseys or the All-Stars who wear them. The Hornets viewed Wednesday not as an opportunity to upset the mighty Celtics but as simply a chance to win their home opener in front of fans apprehensive about the post-Chris Paul era.

After the Hornets fell behind, 9-2, coach Monty Williams likely informed his team that the Celtics of the past two years were a front-running team that eventually will wither. And such was the case when New Orleans went ahead, 30-20, early in the second quarter.

No longer can the Celtics rely on reputation or past accomplishments. They have to reprove themselves, and the question remains whether they are capable of such a thing with their aging bodies.

Wednesday night proved that even Rajon Rondo can’t carry the team for three games in four nights. He was repeatedly beaten off the dribble by Jarrett Jack, a middle-of-the-pack NBA point guard, and that allowed the middle to open, especially against the timid Jermaine O’Neal and seemingly heavy-legged Kevin Garnett.

O’Neal’s production is quickly becoming an issue. Coach Doc Rivers said he is not concerned about O’Neal’s scoring but more his defense and rebounding. In three games, O’Neal is averaging three rebounds and one blocked shot. In what perhaps was a move of desperation or forecasting, Rivers inserted rookie Greg Stiemsma in the first half against New Orleans, and he blocked six shots in 20 minutes.

And even Stiemsma picked up a technical foul for grabbing the rim trying to defend a layup attempt by Carl Landry. That isn’t likely to occur with O’Neal. The center position has been one of concern since Shaquille O’Neal retired after one year with Boston, and while Jermaine O’Neal claims to be healthy, he hasn’t been a productive starting center in two years.

It may be time for Celtics president Danny Ainge to seek a solution in the middle, but that has become increasingly difficult. Any worthy center is going to demand more than the veteran minimum the Celtics have to offer. And a player such as Erick Dampier brings NBA capabilities but also serious limitations, like O’Neal.

But if opponents such as Landry are going to attack the rim without the slightest fear of a hard foul, then the Celtics are going to get dominated in the paint.

“J.O. just has to focus on his job, not look at the box score, how many shots he has. He needs to focus on being a great defender, a great pick-setter, and everything else will happen for him.’’

There is little sense of panic following the failed three-game road trip, but the Celtics will have to monitor the center position, the health and energy of Garnett, and the bench production over the next few games.

Rivers already announced that rookie E’Twaun Moore, whom the organization has liked since nabbing him 55th overall in June’s draft, will replace Avery Bradley as the backup shooting guard.

“There were a couple of questions answered to me today, as bad as the game was.’’

With the Pistons tonight, back-to-back games with the Wizards (Sunday and Monday), and a home game with the Nets in the next six days, the Celtics have a chance to rack up victories and gain some confidence.

But what happens when Indiana (twice), Dallas, Chicago, and Oklahoma City follow? Is that enough time for the Celtics to realize they are not what they once where and desperately need to reinvent themselves?

Yesterday, a day off, served as a day of reflection, and the TD Garden crowd will make the Celtics feel better about themselves. But that won’t be enough. The Celtics have to execute better defensively, and those aging legs need to recharge, because 95.5 percent of the season still remains, a large opportunity to flourish or perish.

“It’s still early,’’ Rondo said. “It’s not like we’re out of the playoffs right now.

“We have a sense of urgency. We definitely know we need to win. The urgency is heightened every game; 0-3 is not a great look for us.

“We have to stick together in the tough times. Right now, we’re getting everybody’s best shot. That’s part of the game of sports. No excuses, we’ll be fine. We’ll get it together.’’