Chip off the old Doc

Son of the Celtics coach has made a smooth transition to college, leading Duke in scoring 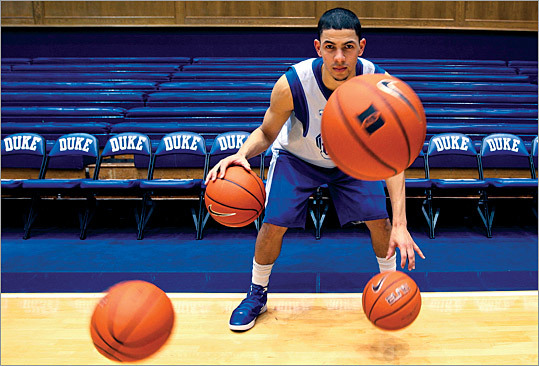 Austin Rivers, whose devotion to basketball knows no boundaries, has impressed his Duke teammates with his hard work and his desire to win a national title. (Stan Grossfeld/Globe Staff)
By Stan Grossfeld Globe Staff / December 30, 2011
Text size – +

When Doc Rivers was with the New York Knicks (1992-94), his children played on the floor of the famous Madison Square Garden.

Austin Rivers - now a 6-foot-4-inch freshman guard at Duke - would have been in diapers at the time.

“He and John Starks’s son, they would love to go out there and dribble around the court,’’ said the Celtics coach. “That was an age where they remember but they don’t remember.’’

This year, thanks to the NBA lockout, Doc was able to see his son play in the Garden, at Ohio State, and even in the Maui Invitational, in addition to Durham, N.C.

Austin Rivers, 19, the leading scorer for the seventh-ranked Blue Devils at 15.6 points per game, has no recollection of his Garden debut. He was born in August of Doc’s first year in New York, and he says his father is confusing him with his older brother Jeremiah, who is now playing professional basketball in Croatia.

But there’s no mistaking the joy the Celtics coach felt when Austin tallied a team-high 18 points in the world’s most famous arena in a win over the University of Washington earlier this month.

“I thought it was cool,’’ said Doc, who watched that game on television because the NBA lockout had ended, though he was able to make it to the Garden for a game against Michigan State in November.

Sitting in the stands as a sweaty-palmed parent was a thrill, but in some ways it was tougher than being a coach.

“I was nervous and excited,’’ said Doc.

Austin said the end of the lockout was bittersweet for him because he won’t have the luxury of seeing his dad in the stands.

“That’s something that never really happened before because of his job,’’ he said.

Doc spent so much time with his son this year that when the lockout finally ended, Austin tweeted, “Now my Dad can go back to work and stop eating all the food in my dorm.’’

The two are very close.

“He’s a great father - I don’t view him as a coach,’’ Austin said. “He gives me advice as a person and as a basketball player, and I’ve learned a lot from him and my mom.’’

Though Austin was rated the top high school prospect by several outlets, critics have argued that he is a reckless, selfish player who doesn’t rebound or play enough defense.

But he says he is all about team.

“My goal is to win a national championship,’’ he said.

When he arrived at Duke, Rivers chose No. 0 for his uniform number “because I have ice water in my veins.’’

And he thrives on the trash talk.

“Hate equals motivation,’’ he said. “Five years ago, I was known as Doc Rivers’s son, and now I’m known as my own person, and that’s through hard work.’’

His game is growing

“I yell at him,’’ said Coach K with a smile. “I yell at my dog, too. Yelling is my encouraging him to do the right thing. But he’s an upbeat kid and he’s just going to keep getting better and better. I love coaching him.’’

He says high school ball is child’s play compared with the college game.

“I’m a whole different player than I was,’’ he said. “I’m smarter. I’m a better defender. I’m a better scorer. I can now score on any type of defense, just by reading the defense.

“In high school, I used to just catch the ball and do whatever I wanted and score. In college, you can’t do that anymore.’’

Coach Rivers, who used to bolt from the Celtics and charter a jet to catch a few of his son’s high school games in Winter Park, Fla., said Austin is steadily improving.

“What Austin has figured out is that if you’re a scorer, they’re going to load up on you,’’ Doc said. “He’s creating offense by finding the open man.’’

And his devotion to basketball knows no boundaries.

“I’ve always thought that was interesting. I never saw guys do that, and he does it all the time.’’

Last year, Austin says, his father was very close to leaving the Celtics for good so he could spend more time with the family.

“I told him to do what you love,’’ said Austin. “I just knew he didn’t want to quit, but he loves our family so much. I told him everyone is all right, and that Mom is ‘Supermom.’

“My dad is doing what he loves, and that’s what he should be doing.’’

Austin’s seamless entry into collegiate basketball has been aided by the counsel of Duke associate coach Chris Collins, a former Duke player and the son of Philadelphia 76ers coach Doug Collins. Their similarities are striking.

“We both have had great dads, but both of us were driven by trying to create our own identities,’’ said Collins.

His advice to the freshman was simple: “Anytime you have a famous father, everything you do is going to be magnified, so don’t let the pressure get to you. Have fun, enjoy the game. The moment you let people’s expectations get to you, you’re in trouble.’’

And Collins says Rivers has game.

“He plays with a swagger and I like it, but it can be perceived as arrogant or selfish,’’ said Collins. “He thrives on being the guy that people yell at on the road.’’

Rivers smiles when asked about hecklers.

“I’ve always had a target on my back,’’ he said. “I see it as a huge plus. Just the fact that I got to grow up around the game. I’ve learned a lot more than kids at this level and I’ve been around more.’’

Peek into the future

He was sprayed with champagne when the Celtics won the world championship in 2008. He has met his favorite player, Kobe Bryant, and Michael Jordan. He has studied Ray Allen’s pregame shooting routine, calling him the “greatest shooter of all-time.’’

Some experts worried that Austin Rivers might come to Duke with a big ego, but that hasn’t been the case.

“He ingratiated himself to these guys right away,’’ said Collins. “He said he wanted to be part of the team.’’

The team responded by needling him. In New York, they watched a rebroadcast of a 1993 Knicks-Bulls playoff game after a team meeting. Doc Rivers was all over the court.

“Some of the guys were teasing Austin, saying, ‘Oh, at least somebody in the family can play some defense,’ ’’ said Collins. “It was cool.’’

Collins said the ceiling for Rivers is high.

“He can be great,’’ said Collins. “He’s really explosive off the dribble. He’s got a will and he’s a very good athlete.’’

Naysayers are starting to show some respect. Rivers already has been named Atlantic Coast Conference Rookie of the Week three times. There’s even talk of him being a lottery pick in the NBA draft in the spring.

But Austin said, “Being one-and-done is just something I don’t think about.’’

Doc said leaving Duke early would be his son’s decision to make.

Austin doesn’t deny that his ultimate goal is to play in the NBA.

“To be honest with you, I think about it every single day of my life,’’ he said. “But right now, Duke’s the focus.’’

He did see Celtics president Danny Ainge in Hawaii.

“I just shook his hand at Maui,’’ said Rivers, “and he just looked at me and gave me a wink because he can’t talk to me, obviously, with the rules and stuff.’’

Playing for his father someday would be fun, he said. Told that he would look good in green, he just laughs.

“That would be interesting, but I don’t think it will happen,’’ he said. “The odds are too long. To play in the NBA, period, would be a dream.’’

He did admit to one weakness, though.

“Golden Oreo cookies,’’ he said. “I’ve got 10 boxes of them in my room. I am obsessed with them. But I burn them right off in practice.’’