THIS STORY HAS BEEN FORMATTED FOR EASY PRINTING
Heat 115, Celtics 107

MIAMI - The Celtics have less time to adjust than in most seasons because of the compressed schedule. Practice time will be limited, so defensive schemes must be learned on the fly. Games will serve as constantly changing blueprints - for the next game.

So the Celtics should be better tonight against the Hornets in New Orleans, because last night’s early test against the Miami Heat exposed many weaknesses and miscues just two games into the season. As they did in New York two days before, the Celtics valiantly rallied from a large deficit, but again they were bested by big shots down the stretch.

On Christmas Day it was Carmelo Anthony who took over. Last night it was a rookie from Cleveland State, Norris Cole, who treated the Celtics as if they were Wright State in the Horizon League Tournament. While much-heralded teammates LeBron James (26 points, 2 in the fourth quarter) and Dwyane Wade (24, 3 in fourth) watched, Cole scorched Boston for 14 fourth-quarter points, including 6 in the final 1:31 to seal a 115-107 Heat victory.

The Celtics walked away from American Airlines Arena knowing they almost caught the Heat with a zone defense orchestrated by assistant coach Kevin Eastman, but again they had no answer for a hot shooter, this time a first-year player who showed no hesitation in draining big shots on the nationally televised stage.

Celtics coach Doc Rivers chose to focus on his team’s whopping 24 turnovers, which resulted in 33 Miami points, and the fact the Heat hit 32 of their first 46 shots before he reluctantly agreed to try the zone. Ray Allen’s 28 points and Rajon Rondo’s 22 were overshadowed by a second consecutive shoddy defensive effort, although the D last night improved during the game.

James and Wade controlled the game in the first three quarters and Miami raced to an 85-65 lead, looking like a team bent on avenging its NBA Finals drubbing last June. The Heat tried several combinations to apply the final blow, but the Celtics’ Keyon Dooling (18 points) and switching to that zone enabled Boston to rally.

Dooling’s 3-pointer with 2:02 left cut the Miami lead to 108-105, and all the Celtics needed was a stop, but they couldn’t get it. The Celtics were so consumed with James, Wade, and Chris Bosh that Cole was left alone for a split second on the perimeter. He drained a 21-footer for a 110-105 lead, and after Brandon Bass answered for the Celtics with a jumper, Cole countered again with a 20-footer to make it 112-107.

“He just made plays,’’ Rondo said. “We contested his shots and he made shots. They are very athletic. They got a lead and they won the game.’’

The Celtics were lamenting another slow start. They fell behind by 17 in New York in the first half, and this time it was 17 again (57-40). Boston used Allen’s hot shooting to reduce the deficit to 10 but James scored 6 straight points and the Celtics trailed by 15 at the break, 69-54.

That lead went to 20 before the Celtics used Dooling and Bass to peck away, and the Heat’s offense became passive against the zone. Wade and James forced jump shots and the Celtics were one possession away from getting it even.

“We’re making steps, you can see it,’’ Rivers said, “When we’re down, we get upset and fight back. That’s how you get down. It’s two games. It’ll get better. I like our group. But we’ve got to win now.’’

After Miami jumped to a 21-11 lead, the Celtics cut it to 30-27 behind 5 straight points from Marquis Daniels. But the Heat opened up the second quarter with a 19-8 run as they caused countless turnovers and turned on the fast break. And reserve swingman James Jones came off the bench to drain three 3-pointers in a 3-minute stretch as the Heat led by as many as 17 in the period.

Rivers spent the half working the officials, convinced his club wasn’t getting equal treatment. But there were times when the Celtics took on the mentality of their coach, approaching the basket looking for fouls. In one instance, Rondo raced to the basket for a layup and anticipated contact from Wade, missing everything on the attempt.

Still, he scored 12 points with five assists in the first 24 minutes while Allen kept Boston within reach with 18 points. Miami shot a blistering 65 percent in the half, including 13 of 19 in the second quarter. The Miami Big Three of Bosh, James, and Wade combined for 40 points in the first half, but the key was the Heat bench, which scored 21 on 7-for-12 shooting. 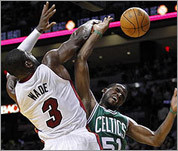