Rivers’s test is how to cram 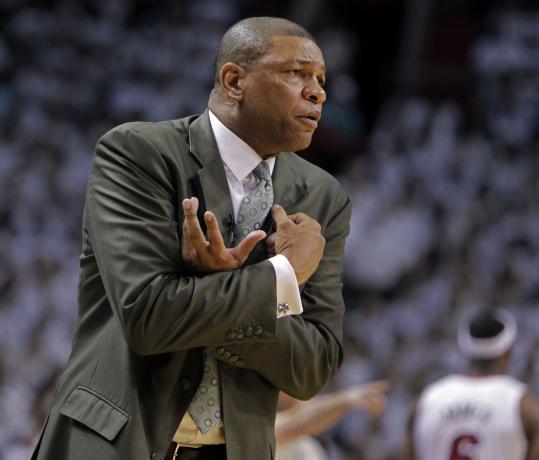 WALTHAM - Trying to figure out how he’d get his team prepared for this lockout-shortened season, Celtics coach Doc Rivers did some research on how coaches approached the similarly stunted NBA season in 1999.

“I know the last time it happened, with the 50-game [season], there were some teams that didn’t have a practice at all during that season,’’ he said.

That wasn’t something Rivers could see himself doing.

But with the Celtics expecting a lot of new faces and not having much time to get them all on the same page, Rivers will have to come up with something. He’s already considering two-a-days for training camp, which will open Friday. But how he’ll manage the regular season is up in the air.

“We’ll figure that out, I can guarantee you that,’’ he said.

There are some luxuries in an 82-game schedule that might not be afforded the Celtics in a 66-game slate. For instance, after back-to-back games last season, Rivers could give his team the day off. There were long stretches when the Celtics went without a full practice.

But in this lockout-shortened season, Rivers will have to be creative about cramming in as much information as possible in an abbreviated training camp and also getting the most out of all the practice opportunities that arise afterward.

Asked whether the shortened season benefits the Celtics because it means fewer games for a veteran team or if it hurts because those games will be crammed into a shorter time frame, Rivers said, “I don’t think it’s an advantage either way.

“You can say the veteran teams can play together so they need less work, but then the younger teams, they’re more athletic and fresher. I think it all evens out.’’

The challenge will be integrating new players quickly. The Celtics had eight holdovers going into last season, but by the trade deadline, three of them were gone. The Celtics spent the rest of the season searching for continuity that never came.

Because of the lockout, first-round pick JaJuan Johnson missed out on summer league. It’s the second straight season the Celtics didn’t have their top pick on their summer league team. Last year, Avery Bradley missed summer league and training camp because of an ankle injury. He has worked out at the Celtics’ practice facility the past two days. Johnson showed up yesterday morning.

Bradley is actually a year younger than Johnson, but he expects to pass along what he knows to help the rookie adjust quickly.

“And I know the other guys will continue to help me, too.’’

Despite recent trade rumors around Rondo, continuity is one of the Celtics’ main incentives this season.

“We do have a core group that is familiar with what we do, and they’re going to be extremely important to start the season to help carry whatever new guys we have,’’ Rivers said. “At the end of the day, we’re just going to have to figure out the rhythm of what works for our team and how it works for us.’’