Progress made in talks 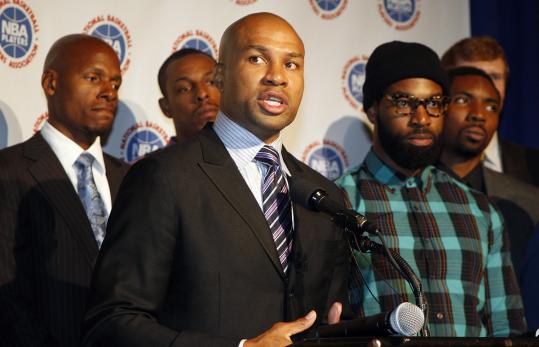 Ray Allen and Paul Pierce (from left) are among the big-name players who have Derek Fisher’s back during negotiations. (Michael Cohen/Getty Images)
By Gary Washburn Globe Staff / October 1, 2011

NEW YORK - The intensity and importance of yesterday’s NBA labor meetings were punctuated by the star power of the players association, who invited some of the game’s biggest names to participate in the pivotal session with the league’s owners.

The results were positive, considering the sides met for more than four hours at an East Side Manhattan hotel and agreed to meet again today, attempting to secure a full regular season that is scheduled to begin in one month.

“Just negotiations, I’ve been there before, so I didn’t go in there thinking I was going to get a deal done,’’ Allen told the Globe. “I’m always encouraged. It was good dialogue between both sides.’’

According to Fisher and NBA commissioner David Stern, no new proposals were discussed. But Stern addressed the media last night with a definitive agenda, making it a point to dispel reports that he would cancel the entire season if a deal is not reached by this weekend. He also revealed that owners plan to triple their revenue-sharing amount to $180 million in the first two years of a new agreement and quadruple that number in the third year.

Deputy commissioner Adam Silver said revenue sharing was one of three major issues that needed to be addressed, and that the players’ association was satisfied with the owners’ projections. The other two issues are the salary-cap structure and basketball related income (BRI).

“It’s good news that we’re meeting [today],’’ Stern said. “I don’t want to make a projection [on a potential deal by the weekend], other than two say both sides have expressed a willingness and desire to make a deal, and both sides agree that the consequences of not making a deal lead us to the prospect of possibly losing regular-season games.

“And we agreed, once you start to lose them and players start to lose paychecks and owners lose money then positions on both sides will harden. And those are the enormous consequences that I referred to [Wednesday].’’

Talks became contentious during the four-hour session, but it appeared that both sides were amicable when the meeting ended. Ten owners attended the meeting; among those not attending were the Celtics’ Wyc Grousbeck and the Mavericks’ Mark Cuban.

“I was actually inspired because it’s one thing to hear that everybody wants a deal, but it’s another thing to see it,’’ he said. “Still positive we can salvage the season and get [a deal] done. I was very encouraged by [this] meeting.’’

Neither side would offer specifics about the talks, other than to say proposals were not exchanged and both sides appeared intent to negotiate through the weekend.

The NBA has already canceled the first two weeks of the preseason. The Celtics are scheduled to play Oct. 16 against the Raptors, a game that is almost certain to be canceled unless a deal is struck soon.

The league has to squeeze free agency and training camp into a small window to ensure the regular season starts on time Nov. 1.

Said Stern: “Just as I have said before, the calendar is not our friend.’’

While Stern said revenue sharing “will not be the issue that separates us,’’ the sides remain far apart on establishing an agreeable salary cap and potential rollbacks on salaries. The league’s owners are accustomed to negotiating with NBPA committee members such as Fisher, Theo Ratliff, and Keyon Dooling, but yesterday James, Anthony, Wade, Pierce, and Andre Iguodala sat across from them at the negotiating table.

And that may have fostered negotiations.

“Everyone was in the room and had the opportunity to see for themselves the process of what we’re going through,’’ Fisher said. “All the guys were supportive. Some of the guys here have been questioned in terms of their commitment, but they are committed. Their presence here today says a lot.’’