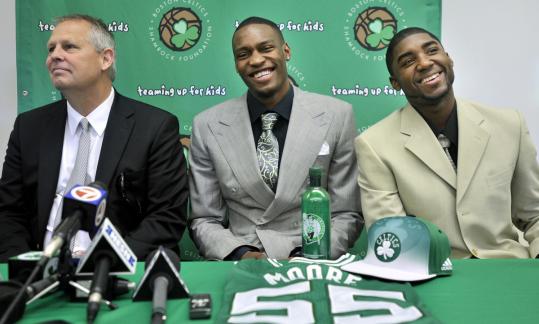 The first step in Danny Ainge’s retooling of the Celtics’ roster took place Monday at a draft introductory news conference at Edison K-8 School in Brighton, as the organization attempts the arduous task of revamping for one final NBA title run and gather pieces for the future.

In JaJuan Johnson and E’Twaun Moore, both of Purdue, Ainge was able to draft two college veterans who understand the importance of blending in and providing depth for a team that lacked that last season.

The Dallas Mavericks’ four games-to-two NBA Finals victory over the Miami Heat offered the Celtics hope. They are not as far from claiming title No. 18 as they believed on May 11, when they were eliminated by the Heat in the Eastern Conference semifinals in five games.

Ainge has never believed the Celtics were too old to beat Miami, but he does believe they need reinforcements to take the pressure off the Big Three and Rajon Rondo for a deep run in the postseason. What Ainge saw during the NBA Finals was a Mavericks team filled with veterans — such as Jason Kidd, Shawn Marion, J.J. Barea, and Tyson Chandler — that exceeded expectations.

The Mavericks received unexpected boosts from their seasoned veterans, helping out superstar Dirk Nowitzki, who struggled at times. The Celtics have three stars capable of taking over games, although not as frequently as in the past.

The Celtics began the process by drafting Johnson and Moore. The Celtics need to get younger and Ainge didn’t help the bench strength by acquiring an over-the-hill Troy Murphy and seemingly intimidated Sasha Pavlovic this season. Neither helped during the postseason.

“I don’t think we’re too old to beat the Heat, I didn’t think we played well, we had some injuries, the Heat played well and they earned the victory,’’ Ainge said. “But I certainly don’t think it was so one-sided that we [should] dismiss our team. Second of all, I think that Dallas did something very special. Dallas had players play in that series as well as they could possibly play. And even elevate their games to a whole new level, which was fun to watch and it was impressive.

“I think Dallas might give other teams a hope, not to take away from their talent. They had guys step up and do special things that you wouldn’t classify as special players but very good players.’’

The Mavericks’ championship sent a message to the rest of the league that they are not as far away from the Heat as they might have thought a month ago. Even some of the staunchest Heat critics were ready to send the Lawrence O’Brien Trophy to South Beach.

The Mavericks overcame the furious push of the Heat’s Big Three with depth, something the Celtics lacked. They were besieged with injuries and players such as Glen Davis and Jeff Green struggled while Jermaine and Shaquille O’Neal fell well short of expectations.

Jermaine O’Neal is expected to return and Ainge avoided an uncomfortable situation when Shaquille retired. With Nenad Krstic, Davis (possibly), Von Wafer, Murphy, and Pavlovic all gone, the Celtics have ample roster space to fill with younger talent when a collective bargaining agreement is consummated.

“We still feel like we’re in the mix with all those teams,’’ Ainge said. “And we still have a chance. We have maybe seven roster spots to fill and the draft is one way to fill some of those. We plan on being very active this offseason and putting a better team out on the court next season.’’

The Celtics’ challenge is to build their core for the future and give the Big Three enough support to make another run. In past years, Ainge has filled the roster with aging veterans, trying to relive 2008, but those Marburys, Finleys, and Murphys were unable to produce.

So the process is delicate, especially under salary cap restraints, to rebuild the roster with players who have enough athleticism and endurance to help the Celtics throughout the regular season and the playoffs. Johnson and Moore are a good start.

“That’s always a challenge, every year the rules are the same for everybody,’’ Ainge said. “The competition is the same. We just have to add to our roster and upgrade from what we have done. But I am fully confident we can compete. I have never wavered from that.’’