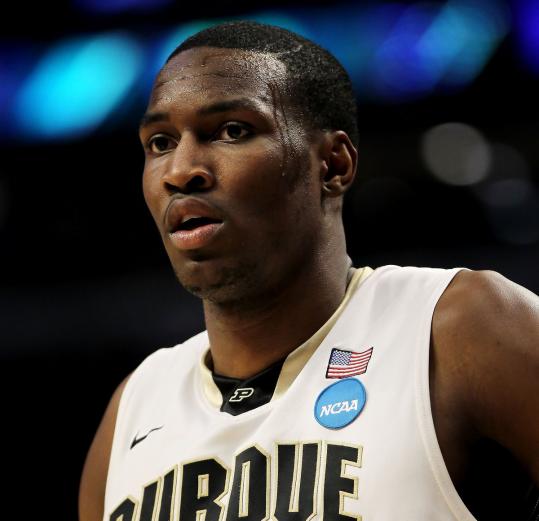 It seemed the unpredictability of last night’s NBA Draft played right into the eager hands of Danny Ainge and Doc Rivers. There were a slew of trades, and all that movement created opportunities for the Celtics to get a player they targeted with the 25th overall pick.

Ainge did not sound optimistic about the draft Wednesday but team sources said that the uncertainty of the first round offered myriad possibilities at No. 25. The Celtics were so confident their target player would be available, they basically traded down two spots with the Nets while picking up a second-round pick in 2014. Boston drafted Providence high scorer MarShon Brooks at No. 25 and shipped him to New Jersey for the 27th pick, Purdue forward JaJuan Johnson.

The 6-foot-10-inch Johnson was targeted by the club for months, but the brass pondered other picks as Johnson’s stock lingered around the late first round. He is exactly the addition the Celtics needed, a defensive-minded big man who rebounds and blocks shots as his specialties.

Johnson, an Indianapolis native, averaged 20.5 points as a senior, adding a midrange jumper to his repertoire. The Celtics like the Big Ten Player of the Year for his defensive instincts and ability to blend into their system immediately. A year playing next to Kevin Garnett will only season Johnson even further.

“Even though he’s a four-year player, we still like his upside,’’ Rivers said. “He slipped to us and I think you’ve got to put him on the floor; I can’t tell you if he’s gonna help or not but I think he’ll be an NBA player and a good one. It may take him some time and it may not.’’

The Celtics didn’t need to take a chance on an underclassman with a high upside. Johnson played four years in the Big Ten, took elbows from Jared Sullinger, swatted runners from Talor Battle and hook shots from Durrell Summers. Johnson played 140 college games, and his experience and youthfulness will help him with the Celtics.

The Celtics intelligently restrained from offering the 2012 first-round pick they got from the Thunder (it belonged to the Clippers and is protected) to trade up. And 90 minutes later, they used the 55th pick to add Johnson’s teammate, E’Twaun Moore, a smooth shooting guard and another All-Big Ten selection.

In the first round, the Celtics sat back and watched several players get drafted higher than their expected slot, leaving many prognosticators shaking their heads. Several teams pulled off trades involving picks and players, causing more confusion. But the Celtics fully expected the night to play out this way, and they carried very little expectations for the clubs picking in front of them.

Rivers said the 25th pick came down to only a few players, including Boston College guard Reggie Jackson. The Thunder owned pick No. 24, and general manager Sam Presti tabbed Jackson, who did not work out for any team because of a knee injury.

With the Celtics sensing that the Mavericks, at No. 26, would not select Johnson, they patiently waited for their man and the brass was privately thrilled, according to an NBA source.

“This year we went in with the idea that if a good opportunity came to move out of the draft, depending on who’s available in the draft, [we’d take it],’’ Ainge said. “But when JaJuan was available, we really wanted to stay. He was a guy we had rated pretty high and we had targeted from the beginning.’’

The Celtics are expected to make Jeff Green a qualifying offer and attempt to retain him as a restricted free agent. Green, Rajon Rondo, Johnson, Moore, and Avery Bradley are a solid core for the future. And the Celtics also have the Clippers’ 2012 first-round pick and plenty of cap space next summer when Garnett and Ray Allen become free agents.

“It’s a big offseason for us,’’ said Rivers, who signed a five-year contract extension in the offseason. “And we want to win it again and we need help. We have to go out and get players.’’

Because of salary cap restrictions and the uncertainty of the new collective bargaining agreement, the Celtics will be hard pressed to make a major impact in free agency.

At least they were able to get a capable player in the first round, one who adds youth to an aging frontcourt and helps the Celtics to move on from the Kendrick Perkins trade. While Perkins was wildly popular with fans and an effective center, Johnson could prove to be just as talented and impactful.