Shaq in a different kind of paint 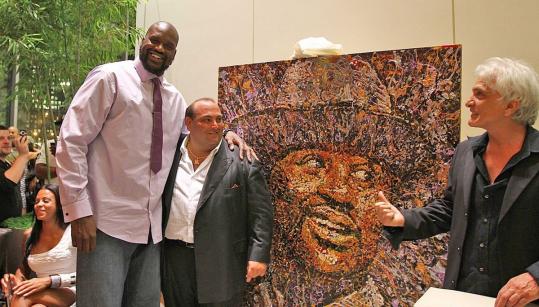 We haven’t seen the last of Shaquille O’Neal. The Big Shamrock, who hung up his size 23 sneakers a week ago, was the center of attention at Strega Waterfront the other night. Owner Nick Varano presented Shaq and girlfriend Nicole “Hoopz’’ Alexander with a painting by North End artist Giovanni DeCunto. Among those who stopped by to bid the big man farewell were Celts coach Doc Rivers, captain Paul Pierce, super fan Mike Rotondi, developer Joe Fallon, WEEI jock Lou Merloni, and hockey hero Mike Eruzione. . . . Rivers was later spied at Del Frisco’s, eating a steak and watching the Mavs beat the Heat in Game 5 of the NBA Finals.