The Bird man of prison

Inmate paid his tribute — and is paying for that, too 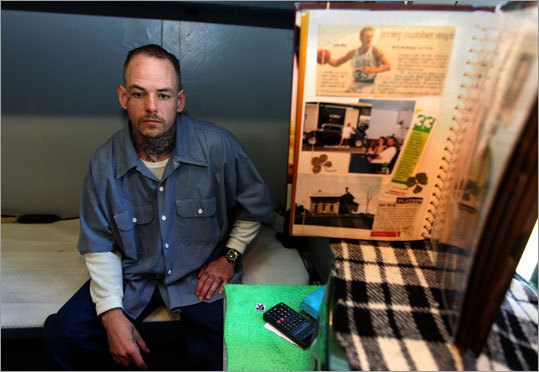 (Stan Grossfeld/Globe Staff) Prisoner Eric Torpy asked for a 33-year sentence instead of 30 because he wanted to honor his favorite basketball player, former Celtic Larry Bird, who wore No. 33.
By Stan Grossfeld Globe Staff / May 13, 2011

HOLDENVILE, Okla. — Just about everyone thinks Eric Torpy is a birdbrain.

In October 2005, Torpy asked an Oklahoma County judge to tack on three more years to his 30-year prison sentence for armed robbery and two counts of shooting with intent to kill.

“He said if he was going down, he was going to go down in Larry Bird’s jersey,’’ Oklahoma District Judge Ray Elliott told the Associated Press back then. “He was just as happy as he could be.’’

But after sharing a 10-foot-by-15-foot cell at the Davis Correctional Facility for the last six years, Torpy regrets asking for the extra time.

“That three is a big deal, you know? Three years matters.’’

Torpy will turn 33 this year and is not eligible for parole until 2033.

The 33 imagery doesn’t end there. Put his arms together and the tattoos on his elbows read “33.’’ He also has a small green shamrock tattooed near his eye.

“Larry Bird is a legend,’’ he says. “To me, he supersedes all basketball legends.’’

Torpy says he was “basically clowning around’’ when he asked for more time.

Because of all the publicity his case has generated, he thinks Bird knows about him.

Bird, who declined comment for this story, was a legendary NBA trash-talker known for playing mind games. Torpy denies taking a page from Bird’s playbook at his sentencing.

“I wasn’t really playing mind games with them as much as I was just trying to make it out to what I wanted it to be instead of what they wanted it to be,’’ he said.

Torpy said the district attorney and judge should never have lengthened his plea bargain agreement.

“In my mind, they became unprofessional,’’ he says. “Why feed into my game? I’m a criminal.’’

But at least he’s a famous criminal, he says. In his cell is a scrapbook that contains a photo of Bird and news clippings about himself, including one from magazine (prison authorities didn’t let him keep the photos). He says he was on ESPN, and that Jay Leno made fun of him.

“I know that I went down in glory and fame, but truthfully, I didn’t know that all of that was going to happen,’’ Torpy says. “It wasn’t intended. It just all came about.’’

He says the good part is that other inmates think he’s crazy and nobody messes with him.

“You’re definitely seen in a different light, because time don’t matter to you,’’ he says. “Yeah, I think it got me a little respect.’’

Torpy says reading the Bible has reformed him.

“He has done everything asked of him,’’ says Bryan Yandell, classifications supervisor at Davis Correctional.

Torpy says the inmates look up to him.

He works in the prison recreation area and makes $16 a month. The prison basketball court is surrounded by fences topped with miles of razor wire. After work, the wiry Torpy is allowed to play.

Torpy still follows the Celtics — inmates are allowed to have cable TV — but he did not approve of the trade that sent Kendrick Perkins to Oklahoma City.

Torpy was a huge Celtics fan while growing up in Riverside, Calif., and remembers watching the team’s classic matchups with the Lakers in the 1980s with his father.

“My first memory was when they beat the Lakers,’’ he says.

He used to wear Celtics jerseys to school, which didn’t play well in La La Land.

“I got in a lot fights for wearing them,’’ he says. “Then after you get so old, you kind of get tired of fighting.’’

He wanted to be a lawyer or a doctor and make a lot of money. He wound up installing air and heating ducts — and inhaling drugs and stealing cars.

Torpy says he regrets what happened the night of Dec. 12, 2002, when he and two companions decided to rob a Little Caesars Pizza in Oklahoma City when they drove by and saw an employee counting money on the counter.

He says his codefendant, George Helt, had the gun and did the shooting.

“I didn’t have no weapon,’’ he says, although one eyewitness at his preliminary hearing testified that he brandished a knife.

Torpy says he was high on cocaine, Jack Daniels, and Everclear, a brand of grain alcohol.

According to police reports and eyewitness testimony, Helt shot two employees and confessed to police.

When Torpy fled, his red stocking cap was left at the scene. In March 2004, police linked DNA to Torpy and a warrant was issued for his arrest. But the case never went to trial. Torpy says he was “railroaded’’ because of his lengthy prior convictions and defendants testifying against him.

“Look, if I took it to trial, they were going to give me life,’’ Torpy insists. “That was guaranteed.’’

In 2033, the year he’s eligible for parole, he will be in his mid-50s. Torpy pondered that for a moment, shook his head, then laughed out loud.