Critics can’t get Garnett to go on the defensive 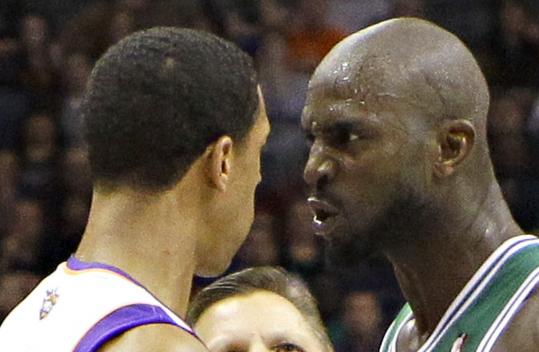 LOS ANGELES — Nets assistant coach Sam Mitchell was sitting next to rookie Damion James, who has missed the last two months after foot surgery. On the TD Garden’s visiting bench, Mitchell began telling Kevin Garnett stories to James, as if Garnett was a legend of generations past, not the starting power forward with the Celtics.

“Kevin never let up in practice,’’ Mitchell told him. “If I came to practice and wasn’t at my best, he would embarrass me, make me look bad. He brought that every day I played with him. It’s no act.’’

Mitchell played seven seasons with Garnett in Minnesota, and credits Garnett with extending his career because the way he sees it, if Garnett had not been so relentless in practice, Mitchell would not have worked so hard.

As an assistant coach, he was using Garnett to motivate James, who has been inconsistent in his first season.

Garnett has taken his share of shots this season from opposing players and coaches. He has been involved in an unusual amount of mix-ups and altercations, with players such as Charlie Villanueva, Channing Frye, and J.J. Barea. He has taken verbal shots from Phoenix coach Alvin Gentry and movie director Spike Lee about his on-court demeanor.

Garnett is fully aware of the criticism. Although he doesn’t often acknowledge the barrage of complaints about his style, he understands they exist and where they come from.

“OK, I don’t play for the Phoenix Suns,’’ he said. “I could care less what Spike or whoever else has something to say about me. As long as Doc Rivers and my organization is happy with what I’m doing, I could care less. If you don’t like my play, then don’t watch it. If I play against you, know that I’m not trying to be your friend. I’m out here trying to win.

“I’m far from dirty. Dirty is like hate. I don’t use that word. I’m competitive and I play hard, but don’t call me dirty. If you dislike me, dislike me, but hate is a very strong word. But it is a different league, it is a more free-flowing offensive league. The league likes to promote offense, that’s cool. But at the same time, there’s two parts of the game and defense is one of them, and I play it.’’

But as many adversaries as Garnett has earned during his 16 seasons, there are those former teammates who swear by his dedication and passion, praise his loyalty, and have learned to admire his drastically different demeanor on and off the court.

“He won’t speak to me when he’s out there on the floor,’’ Mitchell said this week. “And he and I are like this [crossing his fingers]. He’s like a son to me. But when he walks out here, he won’t even acknowledge me sitting over here. When I was a head coach at Toronto, he wouldn’t walk over and hug me. But I know that. That’s him.

“After the game, he’ll call me, we’ll talk, we’ll text. But when it comes to 7 o’clock, he’s coming to win a game. That’s what he’s paid to do. But you have to understand, when you have the stature that he has, you never know when people come at you, what are their motives. It’s sad, but sometimes that’s the curse that comes with fame.’’

Garnett spoke with the media yesterday, two days before his 14th consecutive All-Star Game, the senior member of the team, one of the old-schoolers. He spent 35 minutes talking about himself, which is uncomfortable. Focus has never been on himself, always on the team.

He is renowned for his four-letter words to opponents, some ring so loudly that season ticket-holders have complained. But the court is not a playground or a spectacle, it’s Garnett’s workplace, and he doesn’t appreciate being disturbed during working hours.

“I play hard, I do play with a purpose,’’ he said. “My demeanor on the court is what it is and of course my demeanor here is different.’’

Garnett spent most of the session smiling. He explained that most of the time he addresses the media is following a game or practice, and that he still carries the scowl from his two-hour shift. There is no joke time.

“You can’t make an assessment of someone if you’ve only seen 50 percent of that person,’’ Garnett said. “Of course, when y’all see me I’m at art, I’m doing what I do. The course of when you guys come in, it’s right after the battle. There’s not a lot to smile about. It’s practice. It’s meant to be hard, it’s tough. What y’all don’t see 20 minutes later is I’m cracking jokes . . . and we’re running around the locker room like 5-year-olds. You don’t get to see that side.’’

That’s a side Garnett displayed just a slice of yesterday, the side Mitchell uses to encourage rookies, the side that has given Garnett a legion of loyal teammates. Garnett will never offer as much of that kinder side as his critics want. While he plays, the game will remain a battle.

And when the game is over, Garnett will be gone.

“I’m going to probably fade to black,’’ he said. “To be honest, I’m not a showman guy. I’m going to fade to black. I don’t know what I will do. I’m an idealist. I have a high drive and I’m very determined. Fade to black, man, like evaporate.’’