They didn’t see this one coming 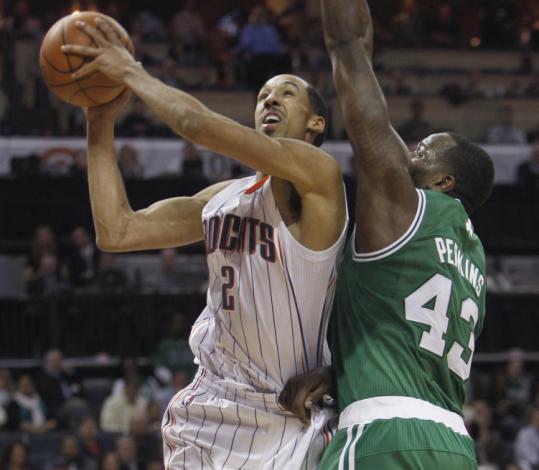 He was deliberating it for so long that the news that Jermaine O’Neal would miss up to two months after having arthroscopic surgery didn’t seem difficult to accept.

Shaquille O’Neal’s maintenance issues have been so persistent throughout the season — calf, knee, foot — that when the Celtics decided to sit him down to rest an inflamed Achilles’ tendon, they seemed prepared for it.

But as an organization, the Celtics were blindsided by Marquis Daniels’s injury, a preexisting condition reinjured on a freak play against the Magic Sunday that left Daniels with a bruised spinal cord and an uncertain future.

For a team that’s had eight players miss a combined 140 games because of injuries, this was the latest in a series of frustrating circumstances.

“Everybody’s dealing with injuries on this team and we’re no different from it,’’ said Kevin Garnett after the Celtics went with just 10 healthy players in a loss to Charlotte Monday night. “ Quis is probably a lot more hard on us right now, just because it was so sudden . . . We’re just hoping he’s all right, and everybody has to carry a load . . . and go forward.’’

Coach Doc Rivers has used eight starting lineups this season, but he said the injuries haven’t brought him to a boiling point yet.

“I never think that way, I never have,’’ Rivers said. “You’ve got to keep rolling. I really try not to live in the past or in the what-ifs. I tell our guys that all the time. We’ve just got to keep playing and finding a way.’’

The Celtics have had some relief in the sense that as bodies have dropped, key players have returned. Though both O’Neals were supposed to be reinforcements for Kendrick Perkins, who is just three weeks into his comeback from offseason knee surgery, Perkins is back in the starting lineup. Although Rivers wanted to limit Perkins’s minutes, he has played 30-plus in each of the past three games.

“That’s why you stack a team, try to stack it as deep as possible, so when guys do get hurt or whatever, it may be it’s time for other guys to come in and step up and do their job,’’ Perkins said. “You never want to see guys hurt. We’d love to have our full team intact and as one, but it happens. The only thing you can do is just deal with it and not hang your head about it.

The bench has suffered most, with players plugging holes and the true second unit never actually playing together yet.

“It’s hard because you never can get your real chemistry unless you’ve got everybody out there at the same time,’’ Perkins said.

Rivers said that depending on how long it takes Daniels to recover, the Celtics could be forced to make a roster move. Until then, they’ll have to get the most out of a depleted roster.

“We’ve been put in unique situations this year,’’ said Ray Allen. “Nobody feels sorry for us. It’s just kind of the hand we’re dealt at this moment.

“The guys that are on the bench have to be better for us. If not, it’s going to require some of the starters to play long minutes just to get through some of these stretches. Mentally, you just have to be prepared. You have to be focused.’’

Knocking on door After knocking down two threes in Charlotte, Allen comes back to Boston with a chance to set the record for career 3-pointers at the Garden — and to do it in front of current record-holder Reggie Miller, who will be calling tomorrow’s game against the Lakers for TNT.

“It just seems like it happened so fast,’’ said Allen, who needs two for the record. “When I got to the start of the season, it was somewhat painstaking because I had — I don’t know if it was 120, 130 threes away — and it was like I could do it this season or I could do it next season, and it just went by so fast.

“It’s like I blinked. It didn’t seem like anything, just play regular basketball, do your job and voila. You’re sitting here. That’s pretty much how my whole career has been.’’

Asked if he has imagined how the shot would play out, Allen joked that teammates were thinking about it more than he was.

“I’m betting that the guy who makes the pass has probably been playing the pass out in his mind more than me shooting the ball,’’ Allen said. “[Rajon] Rondo’s been like, ‘I’ve got to get that pass.’ Nate [Robinson] is probably thinking, ‘I hope I’m in the game because I need to get that pass.’’ ’

Pierce vs. Allen Paul Pierce will have a chance to rain on Allen’s 3-point parade at All-Star Weekend Feb. 20 in Los Angeles. He and Allen will go head to head as Pierce tries to defend his title in the 3-point contest. The NBA made it official yesterday, announcing that Allen and Pierce would headline the event. But it’s far from a two-man show. Oklahoma City’s Kevin Durant, who topped Rondo in last year’s H-O-R-S-E competition by winning a 3-point shootout, threw his name in along with Miami’s James Jones, Golden State’s Dorell Wright, and Cleveland’s Daniel Gibson.