A new force was at work 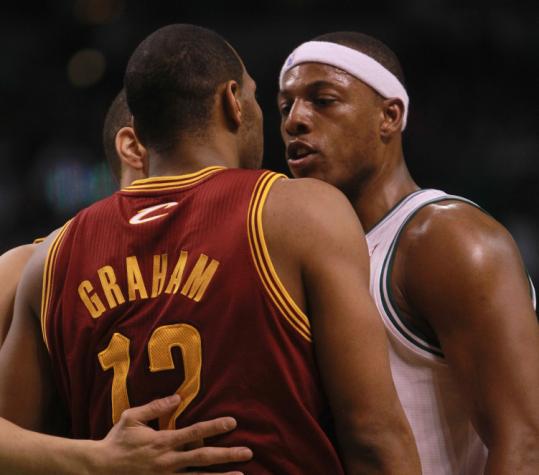 Paul Pierce and Joey Graham jaw in the first half; there wasn’t much for the Cavaliers to say after their 18th straight loss. (Barry Chin/Globe Staff)
By Bob Ryan Globe Columnist / January 26, 2011

I still can see the look. Kendrick Perkins was caught underneath the basket in a big man sandwich between Pau Gasol and Andrew Bynum and there was little doubt the outcome was bad. His right knee was messed up, somehow.

That was in Game 6 of the 2010 NBA Finals. The Celtics lost that game and they lost the next one, as well. Would having Perkins have given the Celtics a better chance to pull out that fateful Game 7? Next question.

No one can say categorically they would have won, but having Kendrick Perkins out there always makes the Celtics a stronger team. File it under the category of “We’ll Never Know,’’ and you also can file it under “But We Think We Know The Answer.’’

The injury occurred June 15. The subsequent operation, which has been described as “knee reconstruction,’’ took place July 12. So after a 223-day absence, Perkins took the floor with 8:02 remaining in the first quarter of last night’s 112-95 dispatch of the forlorn Cleveland Cavaliers.

It’s doubtful there were any past or present NBA players sitting at home tweeting that Perkins isn’t tough enough to satisfy them.

Celtics coach Doc Rivers kinda/sorta knew on Monday night that Perkins would make his 2010-11 season debut last night. Perkins had been working out with the team for some time, and the idea was that he would start playing after the upcoming West Coast trip. But then he had a very good practice Monday morning, after which trainer Ed Lacerte and team physician Brian McKeon told Rivers, “Let’s change what we told you this morning.’’ Perkins was good to go.

He entered to a 25-second standing ovation. “I tried not to be too emotional and stay focused,’’ he said.

The Standing O didn’t surprise anyone.

“There’s people in the crowd that work hard every day, blue collar, and Perk identifies with those people,’’ said Rivers. “If you’re a guy that works 9 to 5, you’ve got to love Perk because that’s who he is.’’

“He is always the guy that has been the hard-hat, lunch-bucket worker on the team,’’ added forward Ray Allen.

His presence was far more than ceremonial. He played 17 minutes, putting up a 7-point, 6-rebound, 3-assist line. He only committed two fouls in those 17 minutes, and, miracle of miracles, neither one was on a high pick.

Best of all, he didn’t pick up any technicals. There were at least two occasions when he might have moaned and groaned and made a Perkins face (when J.J. Hickson went over his back for a tip-in the old Perk would have exploded), but he registered a brief complaint and let it drop.

OK, there was that one little incident . . .

“I mean, he almost ran after the [ref] the one time,’’ Rivers said. “And I was thinking, ‘You’ve got to be kidding me. Perk’s back.’ The whole bench when he did it started laughing, saying, ‘Perk’s back.’ ’’

The big thing with regard to Perk’s on-court behavioral issue is that it will be hard to accumulate enough technicals leading to a suspension. That’s the good thing about him missing the first 43 games.

“He started so late he can’t get to the number,’’ Rivers chuckled. “So I think we’re safe there because at the end of the day Perk’s going to be Perk.’’

That’s true in a number of ways. Perkins had three offensive rebounds, and two of his pitch-backs led to second-chance 3-pointers. The Celtics haven’t had many of those this year.

Perkins remains a handy target for drop-off passes, and indeed he was only on the floor for 47 seconds when he took a feed from Allen and laid one in for his first 2 points of the season. He was also fouled, but he missed the free throw, something that occurred on a later 3-point play opportunity. When an inquisitor kidded him about his 1-for-4 foul shooting, he said, “You’re jinxing me. I’m shooting a hundred free throws a day. You’re jinxing me.’’

Rivers has no immediate plans to increase Perkins’s workload. “It will stay the same,’’ the coach explained. “You know, he actually played one or two more minutes than we anticipated. He wanted to stay in. But I think that will be it for a while, 16-18 minutes.’’

From the time he arrived here more than seven years ago as an unpolished gem of a prospect out of Clifton J. Ozen High School in Beaumont, Texas, Perkins has never been afraid of work. He has gone from a kid Rivers had no intention of playing to a member of a starting five that can claim never to have lost a playoff series when fully intact. He doesn’t have the name or the finesse of Messrs. Garnett, Pierce, Allen, or Rondo, but he provides the gristle without which the Celtics cannot fully function.

“We have kind of been, I don’t know what words to use, but less than ourselves over the three or four months that we have been together, just waiting,’’ said Allen. “We have had great success with the guys we’ve been using, but we haven’t had the lineup that has been consistent in the past 3 1/2 years where we have won some big games, including a championship. It was great to see him back on the floor.’’

Kendrick Perkins wasn’t supposed to be back until after the All-Star Game, remember? That’s all he had to hear.