Let’s hope it’s the first of many 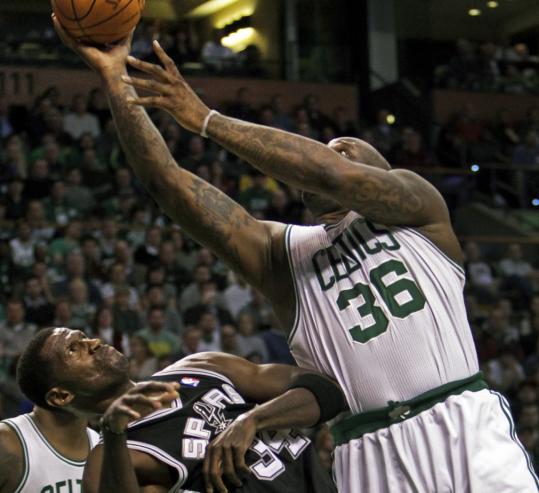 The Celtics and Spurs are not the Heat and Lakers, but they came into last night’s game with the two best records in the NBA. Folks on Causeway Street happily “settled’’ for this matchup. It’s a pretty good draw when 26-7 meets 29-5 in the first week in January — especially when the rosters feature so many men of a certain age.

The showdown did not disappoint. Ray Allen (31 points) made 13 of 16 shots, the Ticket Stub (Glen Davis) scored 23 and took a huge charge at the finish, and Rajon Rondo punched in with a triple-double (12 points, 10 rebounds, 22 assists) as the Celtics out lasted the Spurs, 105-103, in a possible June preview.

It was exhausting. There were 12 ties and eight lead changes. The Celtics led by 9 with less than a minute left, then watched the Spurs rip off 7 points in 23.8 seconds. The Spurs had a chance to tie or win it when Allen missed two free throws (which happens about as often as Larry Bird picks up a check) with 7.4 seconds left, but Manu Ginobili’s final heave was thwarted by Paul Pierce and Marquis Daniels.

The Celtics shot 61 percent from the floor.

“It was crazy tonight,’’ said Big Baby. “Shots fired from everywhere. They played off me, so I kept shooting.’’

I don’t know about you, but I could watch seven more like this.

The Celtics came out for warm-ups sporting royal blue Adidas “NBA Fit’’ pregame tops. Call me a traditionalist, but that’s just wrong. It took me a while to get used to the subtraction of black high-tops and the addition of cheerleaders, but seeing the Celtics in New York Giants colors is shocking. I’m pretty sure Red would have hated seeing his Green tangled up in blue (Shaq clearly agrees; the Big Fella came out in a green top and had to go back to the locker room to get his new garb).

The Spurs were coming off a bad loss in New York Tuesday night and longtime coach Gregg Popovich made no attempt to sugarcoat the waxing at Madison Square Garden.

“Everybody basically sucked,’’ said the man who has been coach of the Spurs since 1996-97.

Popovich also delivered an ode to aging superstar Tim Duncan, reminding us that a coach’s job is infinitely easier “when you have a star that can handle criticism and is willing to be coached.’’

Down the corridor, Allen seconded that emotion, saying, “In this game, you can’t take criticism personally.’’

There was little reason to rip Jesus Shuttlesworth on this night, until the finish. For most of the night, Allen looked like he was throwing apples into an oil drum. Then came the curious two misses from the line at the end.

“That just about never happens with Ray,’’ said Danny Ainge. “I remember Kevin McHale did it at the end of that Laker game in the ’84 Finals. Right before Gerald Henderson stole the ball. We were laughing the next day because when we watched the film you could see Kevin’s knees shaking before the second free throw.’’

The Spurs did not quit. They have tremendous firepower and are off to the best start in franchise history.

“We’re not the Chicago Bulls when Michael [Jordan] was there,’’ said Popovich. “We’re going to come back to the pack. To me, it comes down to how hungry this group is.’’

“They came right back tonight,’’ said Pierce. “This was two heavyweights battling it out.’’

Are the Spurs good enough to unseat the two-time world champion Lakers and represent the West in the NBA Finals? Yes. They are a little soft on defense and lack a dominant presence down low, but the Spurs will be taken seriously deep into May.

A better question might be, “Can the Celtics win a championship without their complete roster?’’

We’re pretty sure the answer is “no.’’ We got a long look at the Green without Kevin Garnett during the 2009 playoffs and it’s not a movie we want to rerun in the spring of 2011. Ainge has done a nice job adding folks like Shaquille O’Neal, Nate Robinson, and Daniels, but the Celtics need the Big Three plus Rondo if they are going to make any bid for banner No. 18. This is a fragile assembly of Hall of Famers and Rivers is going to need all of his players if the Celtics are going to get past the Heat and Lakers/Spurs. Last night’s breathless exhibition did nothing to discourage that notion.

We would certainly miss Kobe, Ron-Ron, Daddy Bill Walton, and Jack Nicholson at courtside, and Stephen Stills singing “What a field day for the Heat,’’ but if this was a preview of the 2011 Finals, we’ll take it.