Shaq gets the party started 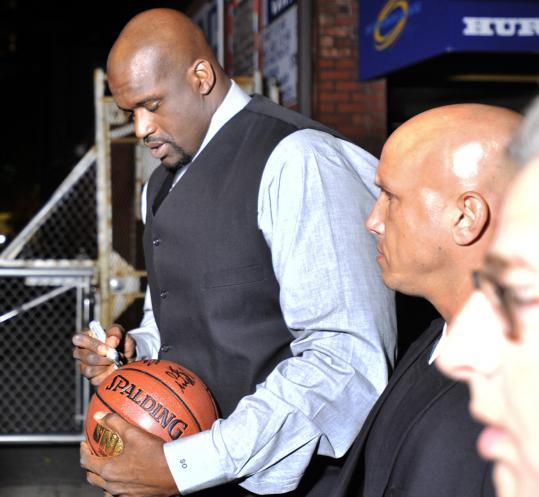 Shaquille O’Neal signs a basketball for a fan on his way into the Greatest Bar on Monday night. (Josh Reynolds for The Boston Globe)
By Mark Shanahan & Meredith Goldstein Globe Staff / October 20, 2010

Shaquille O’Neal’s welcoming celebration at the Greatest Bar Monday night was more of a media circus than a party, with the number of reporters almost matching the number of fans in attendance. Shaq took time to answer some questions, sign some paraphernalia for collectors, and party with guests and VIPs who stayed on the club’s top floor. There was no sign of Shaq’s Celtics teammates at the Metro PCS-sponsored event, but the green giant told us he didn’t mind being followed by reporters as opposed to players and fans. “I like it,’’ he said of the media attention, adding that he will not be joining Boston’s police force as he did in Cleveland. Shaq told us a few other things, but he spoke too quietly and quickly for us to understand. He may give our mumbling Mayor Menino a run for his money.