To Celtics, Frank the perfect fit 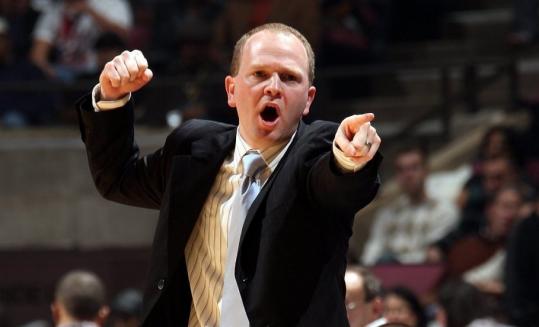 The love-fest between Doc Rivers and Lawrence Frank is well documented.

Frank was coaching the Nets, but by then they hardly resembled the team that had made six straight playoff appearances from 2002-07, including consecutive trips to the NBA Finals in 2002-03. It was the tail end of the Vince Carter era. Yi Jianlian was in his second NBA season. Devin Harris was in his first full season after being traded to New Jersey by Dallas the year before. Brook Lopez was a rookie.

Paul Pierce then went out and dropped 22 points, Kevin Garnett scored 20, Rajon Rondo nearly put up a triple-double, and the Celtics thumped the Nets, 118-86.

So much for compliments.

“I think he likes me because he always beat me,’’ Frank said. “He tried to get me on the schedule two more times.’’

For Rivers, it was always a no-brainer that Frank would be great to work with. He was on the bench as Byron Scott’s assistant for four seasons, then took over when Scott was fired during the 2003-04 season. Rivers invited Frank to Waltham to watch a practice last season and get a feel for what the team does. When it came time to fill the spot of Tom Thibodeau, who left to become head coach of the Bulls, Frank was the perfect fit.

“I’ve known him since I’ve been in the NBA,’’ Frank said. “We’ve always had mutual respect for each other. And I’m thankful for the opportunity to join this franchise.’’

“You can only be as good as what you’ve got on the floor,’’ Rivers said. “And they were obviously in transition, unfortunately for him. When he had the guys he showed what he can do.’’

Now, Frank is on a team filled with “guys.’’ A year ago he was teaching and developing a team trying to rebuild. Now he’s a part of a championship-driven squad featuring seven former All-Stars and four likely Hall of Famers.

“He’s finally got the team that he wanted,’’ said Shaquille O’Neal, whose Lakers beat Frank’s Nets in the 2002 Finals. “Coaches can be great, but if you don’t have the greatness with you, you can’t really show what you can do. He had some great runs in Jersey, but the talent factor wasn’t really there. Now he’s with us. It’s just some more knowledge, some more help for Doc.’’

He had his share of talent in New Jersey (Carter, Kenyon Martin, Jason Kidd, Richard Jefferson), but Frank is the first to admit Boston is a special situation. Without the extra duties that come with being a head coach, he can focus almost exclusively on basketball.

“I never minded the media part,’’ Frank said. “It’s the losing part that got me. But this has been an ideal situation in that you look at the franchise, you look at the team, you look at the head coach, it’s totally a team where as an assistant coach, and I speak for all of us, we just do our jobs. You don’t have to worry about any of the other stuff that does go on in the league.

Still, Frank is replacing Thibodeau, the coach considered the architect of a dominant defense and also someone who left significant fingerprints on the Celtics’ renaissance the past three seasons. Someone who got Kevin Garnett, Ray Allen, and Paul Pierce to buy in at a stage of their career when they didn’t necessarily have to.

“Tibs is one of the greatest assistant coaches I’ve ever played for,’’ Pierce said. “Tibs helped me get better 10 years into the game, and you don’t see that a lot.’’

What gets lost, however, is that defense is at Frank’s core as much as it was Thibodeau’s.

“They’re different guys,’’ Celtics forward Glen Davis said. “But they’re both defensive-minded. Frank is just a defensive-minded coach, and I pride myself on being a team defensive guy, being at the right spot at the right time. I work with Frank on just that aspect of the game.’’

Thibodeau was a noted workaholic — 18-hour days, nonstop game tape. Frank is similarly meticulous, “but a little more normal,’’ Pierce joked. What goes farther for Frank, though, is his credibility. He spent six years as a head coach.

“When you’ve got these type of headstrong veterans, it’s hard to have the veterans who’ve been around the block more than a few times, them respecting somebody,’’ Pierce said. “It’s not like you can bring anybody in to fill that role. You’ve got Hall of Fame players like Shaq and Kevin. You want guys in there that they can respect also, and I think they do.’’