With knee surgery well behind him, Garnett is healthy, happy, and ready to rebound 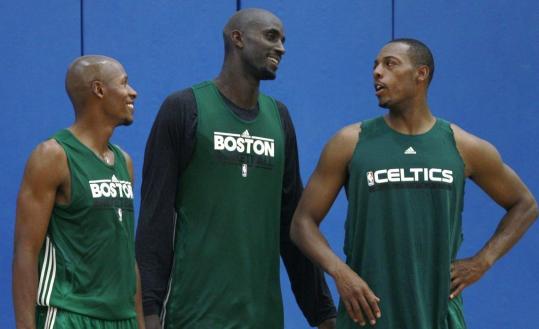 NEWPORT, R.I. — This time last year, Kevin Garnett was running sprints with Kinesio tape on his right leg, hoping the adhesive would serve as a salve for his surgically repaired knee. It’s difficult to concentrate on preparation for a much-anticipated season when there is a large degree of uncertainty about carrying out basic basketball tasks.

Garnett is beyond such concerns this time around. His right leg is not taped. He isn’t thinking about a potential collapse every time he takes a step with vigor. During a drill in yesterday’s first practice of training camp, he jumped effortlessly to dunk a ball with his right hand. There were no second thoughts, no twinges of pain when he landed, no limp in his first step down the court.

This is not to say that Celtics fans will see the vintage Garnett from five or six years ago. He will, however, be reminiscent of the Garnett who spearheaded the Celtics’ run to the NBA title in 2008. At age 34, Garnett realizes his limitations more than ever, but he is heartened by several factors this season.

He is as healthy as he was two years ago, and with the additions of Jermaine O’Neal and Shaquille O’Neal and the development of Glen Davis, Garnett will not be relied upon to produce as he did three years ago. The years of him dominating the paint as a volume scorer and rebounder may have passed, but he should produce more of those vintage KG moments more often.

He walked off the court yesterday with peace of mind, less concerned about his knee and more concerned about Shaquille O’Neal distracting him during his media session. He couldn’t stop laughing when O’Neal started dancing behind the camera, and he seemingly hasn’t stopped smiling since he reported to Waltham, Mass., and began working out with his teammates.

“If you’re speaking on my injuries, I feel better obviously a year later,’’ he said. “My body feels good, man. I took only one rest today. [Rajon] Rondo and I just kept communicating and talking. It was a good day, man.’’

Garnett’s importance to the Celtics is unquestioned. When that turnaround jumper is falling and he is a beast around the basket, he is one of the league’s better scorers/rebounders. The Celtics’ defense revolved around him barking commands and helping teammates with his length, but the constant pounding on his right knee forced him to miss 10 games midway through last season and produced an uneven second half.

“Kevin was phenomenal [today],’’ coach Doc Rivers said. “I just asked him to do what he’s done in the past [this summer], but this year he wasn’t coming off surgery. It was just rehabbing, getting ready for the season. He’s just more explosive. He has his hop back, which is good.’’

The Celtics didn’t get a 100 percent Garnett at any point last season, and he maintains such a low profile during the summer that it’s difficult to say exactly what he did to improve the strength and endurance of his right knee, but the Celtics trust his decisions, so they are confident he will be improved.

His mood yesterday was light. Last year, all eyes were on Garnett, noting every dunk, every sprint, every collision, and every awkward landing. Yesterday, there was no such scorecard.

“He’s pretty much the same,’’ Rondo said. “He wasn’t as timid coming down on the leg and landing. But he was Kevin. He was fine, still talking, communicating around the floor, playing extremely hard.’’

And regardless of the presence of the O’Neals, the emergence of Rondo, the seniority of Paul Pierce, and the calming influence of Ray Allen, Garnett remains the face and heart of the Celtics. The team suffered last season when he was struggling to play on a leg weakened by surgery to remove a bone spur the size of a thumb, and his teammates watched as he was dominated in matchups against Washington’s Andray Blatche and the Lakers’ Pau Gasol.

Garnett never will publicly say he has a payback list, but he will acknowledge that last season may have been the most difficult of his career. A perennial All-Star who had been remarkably healthy during his career, Garnett was crippled by his first significant injury. And as Tom Brady and many others can attest, major knee surgery requires two years to fully recover.

Well, this is the second year.

“More mentally than anything last year was hard for me, because I knew I was playing through some difficult times,’’ said Garnett. “I’m not the one to make excuses.

“I feel a lot better. I’m eager to start camp. I’m really excited. I don’t like us, I love us. I’m the one to work, to come in here and continue to work. I feel very, very strong. I feel very vibrant, if that’s a word I want to use here.