Ex-Celtic Williams, once a top scorer, is now looking for an assist 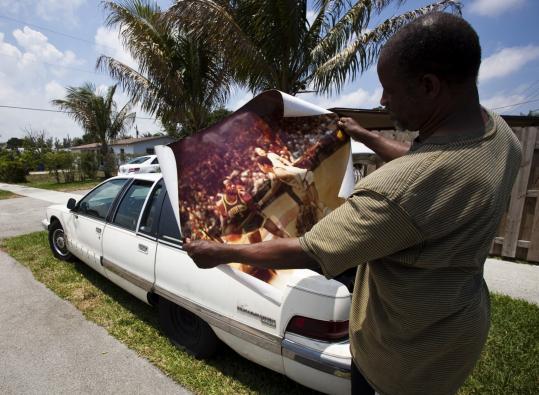 Ray Williams, 55, looks at a reminder of his decade-long NBA career. In this photo, the high-scoring guard is defending his older brother, Gus. (Jason Nuttle/For The Boston Globe)
By Bob Hohler Globe Staff / July 2, 2010

POMPANO BEACH, Fla. — Every night at bedtime, former Celtic Ray Williams locks the doors of his home: a broken-down 1992 Buick, rusting on a back street where he ran out of everything.

The 10-year NBA veteran formerly known as “Sugar Ray’’ leans back in the driver’s seat, drapes his legs over the center console, and rests his head on a pillow of tattered towels. He tunes his boom box to gospel music, closes his eyes, and wonders.

Williams, a generation removed from staying in first-class hotels with Larry Bird and Co. in their drive to the 1985 NBA Finals, mostly wonders how much more he can bear. He is not new to poverty, illness, homelessness. Or quiet desperation.

In recent weeks, he has lived on bread and water.

“They say God won’t give you more than you can handle,’’ Williams said in his roadside sedan. “But this is wearing me out.’’

A former top-10 NBA draft pick who once scored 52 points in a game, Williams is a face of big-time basketball’s underclass. As the NBA employs players whose average annual salaries top $5 million, Williams is among scores of retired players for whom the good life vanished not long after the final whistle.

Dozens of NBA retirees, including Williams and his brother, Gus, a two-time All-Star, have sought bankruptcy protection.

“Ray is like many players who invested so much of their lives in basketball,’’ said Mike Glenn, who played 10 years in the NBA, including three with Williams and the New York Knicks. “When the dividends stopped coming, the problems started escalating. It’s a cold reality.’’

Williams, 55 and diabetic, wants the titans of today’s NBA to help take care of him and other retirees who have plenty of time to watch games but no televisions to do so. He needs food, shelter, cash for car repairs, and a job, and he believes the multibillion-dollar league and its players should treat him as if he were a teammate in distress.

One thing Williams especially wants them to know: Unlike many troubled ex-players, he has never fallen prey to drugs, alcohol, or gambling.

“When I played the game, they always talked about loyalty to the team,’’ Williams said. “Well, where’s the loyalty and compassion for ex-players who are hurting? We opened the door for these guys whose salaries are through the roof.’’

Unfortunately for Williams, the NBA-related organizations best suited to help him have closed their checkbooks to him. The NBA Legends Foundation, which awarded him grants totaling more than $10,000 in 1996 and 2004, denied his recent request for help. So did the NBA Retired Players Association, which in the past year gave him two grants totaling $2,000.

Charles D. Smith, an NBA veteran who heads the retired players association, said Williams has not taken advantage of efforts to help him find work.

“You can only do so much for any one player because there are a lot of guys who need help,’’ Smith said. “Ray needs to let us help him help himself.’’

Problems in transition
Hall of Famer Bob Cousy, who helped create the Legends Foundation and serves as a director, understands the financial pressures squeezing many NBA retirees. Cousy himself auctioned his NBA memorabilia in 2003 to help support his daughters and grandchildren. As for Williams, Cousy said, the Legends Foundation generally limits former players to two financial grants.

“If a client comes back a third time, he needs to make a very compelling case,’’ Cousy said. “Ray just hasn’t done that.’’

The rejections angered Williams. He said he wants to work but needs transportation to reach a workplace.

“I’m in the middle of an emergency, and they’re going to turn their backs on me?’’ he said. “How about all these [NBA] guys with big contracts? Are they going to help?’’

Times have changed since Williams joined the NBA. As the 10th overall pick in 1977 out of the University of Minnesota — he played there with Kevin McHale — Williams signed a four-year, $500,000 contract with the Knicks. He received no significant endorsements.

By contrast, 19-year-old Brandon Jennings, the 10th pick last year, received a two-year, $4.5 million contract with the Bucks after landing a $2 million deal with and playing a season in Italy for $1.65 million.

Jennings earned more in his first two years as a professional than Williams made over a decade. After Williams led the Knicks in scoring (16.8 points a game) over his first four years in the league, he signed his richest deal — a three-year, $1.5 million contract with the Nets in 1981. But his production declined after the deal expired, and he retired in ’87 without a college degree or professional skill.

A generation later, Williams has little more than memories to show for running NBA floors with the likes of Bird, Magic Johnson, and Michael Jordan.

“Ray is like a lot of us who had trouble maintaining our pride and dignity in new environments after we left professional sports,’’ said the Reverend Woody Bennett, a former NFL running back who has supported Williams.

Williams has needed help since he went from owning fine cars and comfortable homes — one for his mother in his hometown of Mount Vernon, N.Y., another for his family in Englewood Cliffs, N.J. — to seeking bankruptcy protection in 1994. No longer able to sustain his NBA lifestyle, he worked for a couple of years as a substitute teacher. He also delivered mail and tended bar, but he had trouble holding the jobs partly because he had spent his life training for little else but playing basketball.

“You have to adjust your identity and be a different person from who you were as a basketball star,’’ Glenn said. “When you become the low man on the totem pole, it can be a very difficult transition.’’

Fond Boston memories
Williams had never confronted serious professional failure. After struggling in high school, he led San Jacinto College in Texas to the junior college national tournament in 1974 and ’75. Then he was an all-conference guard at Minnesota, playing with McHale (a future NBA Hall of Famer), Mychal Thompson (the NBA’s top draft pick in 1978), and Flip Saunders (future NBA coach of the Timberwolves, Pistons, and Wizards).

In the 1976-77 season, Williams set the Big Ten record for assists in a season (118) and a University of Minnesota mark for assists per game (5.7). He averaged 18.9 points for the Gophers, and when the Knicks drafted him he was touted as the next Walt “Clyde’’ Frazier, a Hall of Famer.

But Frazier’s legacy was never in jeopardy. Though Williams enjoyed a long run in the league, he gained a reputation as a player sometimes more suited for street ball than structured NBA schemes. An explosive scorer, Williams also sparkled at times as a defender and playmaker. But he often lacked court discipline, which translated into turnovers (he led the league with 335 in the 1982-83 season), questionable shot selection, and headaches for his bosses.

When the Celtics signed Williams in February 1985 to back up guards Dennis Johnson and Danny Ainge, Knicks general manager Dave DeBusschere was quoted as saying, “Ray Williams will help Boston as long as they keep the ball out of his hands at the end of games. Otherwise, he’ll try taking the last shot instead of Larry Bird, and [Celtics president] Red [Auerbach] will be out there with a gun.’’

He appeared in every playoff game that year for the Celtics, averaging 6.3 points and 3.2 assists, until he was ejected in Game 4 of the Finals for scuffling with LA’s Kurt Rambis. Williams did not play again (coach’s decision) as the Lakers went on to win the series in six games.

‘I’m desperate, man’
Two years later, Williams was out of the NBA and hurtling toward financial ruin. By 1994, he was in a New Jersey bankruptcy court, having lost his home, his marriage, and nearly his life.

“I was so stressed out that I thought about suicide,’’ he said.

Instead, he set out for Florida. Trying to start over, Williams secured a grant from the Legends Foundation. But he lost the money, court records indicate, when the widow of a condominium owner who agreed to a lease-to-own contract with Williams opted out of the contract after the owner died.

Broke again, Williams repeatedly tried in vain to hold jobs. Hindered by his diabetes, which was diagnosed three years ago, he lost or walked away from jobs as a cleaner, handyman, high school girls’ basketball coach, bakery worker, and golf course groundskeeper. In 2005, he filed again for bankruptcy.

Transient since then, Williams has bounced from one friend’s house to another’s, from one shelter to another. He finally ran out of friends to stay with, soured on the shelter life, and settled a couple of months ago in his car. He also owns a ’97 Chevy Tahoe but needs to pay a repair shop $550 to release it.

He has no health insurance or car insurance. And he already has tapped his NBA pension, he said.

“I’m desperate, man,’’ said Williams, who as captain of the 1980-81 Knicks was at times the toast of Broadway. “I’m selling everything I have left just to survive.’’

An avid fisherman, he has sold or pawned his best rods and reels. His golf clubs are for sale. But most of the rest of his belongings were auctioned off after he fell behind on a storage bill.

Williams also is running out of friends and relatives to ask for help. He said his brother, Gus, sometimes sends him food money. But he said Gus, who declined to be interviewed, is coping with his own financial problems.

Williams also is reluctant to turn again to Glenn, Bennett, and others who have supported him, including Mike Woodson, the former Hawks coach who played with Williams on the Knicks.

“It’s hard to keep imposing on friends when you don’t have some kind of solution to your problem,’’ Williams said.

Nor can he turn to his former agent, Fred Slaughter, who once loaned him money.

“Ray was always a good person, a good player, and a good client,’’ Slaughter said. “But was the loan repaid? No. So I just raised my eyebrows and moved on down the road.’’

Williams has never been arrested. But the deeper he falls into despair, he said, the more he prays not to break the law to make ends meet.

“If I didn’t have faith, I probably would have done something drastic by now, something I would regret for a long time,’’ he said. “I know what the devil wants me to do, to turn to crime or drugs, or anything to destroy my faith.’’

He said he needs to get back on his feet and become a productive NBA retiree, a man with a purpose.