Rivers to return for another chance at title 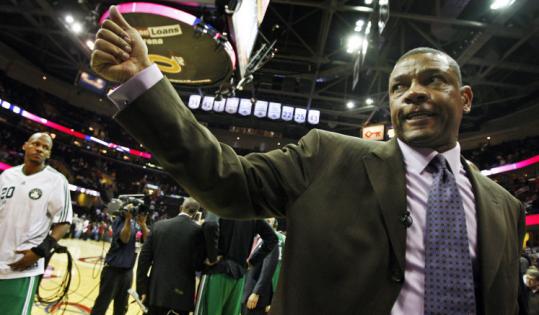 The chance for another shot at an NBA championship was too much for Doc Rivers to pass up.

He spent the last two weeks wrestling with the decision to either step away from his job as coach of the Celtics, possibly the first sign of the end of the team’s recent renaissance, or to return for another season with a group of players — future Hall of Famers and emerging All-Stars — that he knew he might never get the opportunity to coach again.

In the end, Rivers chose to return, and he will do so with the belief the Celtics can make another championship run.

“I’m coming back,’’ Rivers said in a text message yesterday. “I want another crack at it with this group.’’

Rivers wanted to make his decision before today in hopes that it would allow the rest of the Celtics’ offseason puzzle to fall into place more easily. The decision comes a day after Paul Pierce, the face of the franchise the last 12 seasons, decided to opt out of the final year of his contract, giving up $21 million to test the free agent waters. Ray Allen also becomes an unrestricted free agent today, and could draw several suitors even as he approaches his 35th birthday this month.

Rivers’s return, along with his stated desire to keep the group intact, is a strong sign the Celtics will work to bring back both Allen and Pierce.

“We’re excited to have Doc back in the mix next year,’’ said team president Danny Ainge. “Doc is rejuvenated and enthusiastic about coaching this team next season.’’

Ainge gave Rivers as much time as he needed to think things through. As soon as the Celtics’ season ended — a crushing Game 7 loss in the Finals punctuating a playoff run that exceeded most outside expectations even if it fell short of the ultimate goal — Rivers began the evaluation process he’s gone through after each of his six seasons in Boston. He asked himself whether he wanted to return or if he wanted time off to be with his family. This time, however, the tug-of-war was more difficult.

On one hand, he had the obvious desire to watch sons Jeremiah (a senior at the University of Indiana) and Austin (a high school senior at Winter Park, Fla.) play basketball and his daughter Callie (a senior at University of Florida) play volleyball. On the other, unable to ignore the fact that despite age, injuries, and a turbulent regular season last year’s team was just six minutes short of an NBA title, Rivers couldn’t help but feel that the Celtics still were close.

Rivers has been on both ends of the spectrum with the Celtics. He was at the helm as a young team stumbled through a 24-58 season in 2006-07. At that point, people were calling for him to be fired. Then, three summers ago, the Celtics made a wave of blockbuster moves that ultimately landed Kevin Garnett and Allen to play alongside Pierce. They tore through the league in 2007-08, winning 66 regular-season games, then beating the Lakers in the Finals for a 17th title. After three years, 178 wins, and two Finals appearances, he’s now regarded as one of the league’s top coaches and undoubtedly the best fit for a team loaded with strong personalities.

Though the core will be the same, the team Rivers returns to will be different. Rasheed Wallace’s retirement is imminent. Kendrick Perkins is preparing for surgery Wednesday to repair the ACL he tore in Game 6 of the Finals. The only reserve still under contract is Glen Davis. The landscape of the league is also set to change with a star-studded free agent class led by LeBron James, Dwyane Wade, and Chris Bosh all expected to make their decisions in the coming days.

From managing minutes to playing through injuries to sorting through chemistry issues, Rivers called last season one of the most challenging in his 11 years as a head coach. Ultimately, he was able to turn a team that struggled during a 50-32 regular season into one that beat Wade’s Heat, James’s Cavaliers, and Dwight Howard’s Magic before falling to the Kobe Bryant’s Lakers.

Speaking to reporters yesterday in San Antonio as he watched his son Austin set a Team USA Under-18 record with 35 points, Rivers said, “It’d be one thing if you didn’t like coaching or were burned out; I’m not actually. This past year, I can say, I’m almost reinvigorated in some ways from it and the group that I have.’’