Across Boston, the party ends with a whimper for thousands

This story was reported by David Abel, Travis Andersen, Maria Cramer, Brian MacQuarrie, and Milton J. Valencia of the Globe Staff. It was written by MacQuarrie.

Dejected and drained, hoarse and hollow, thousands of party-primed Celtics fans streamed sullenly into the streets late last night after their beloved team fell to the Los Angeles Lakers in a thwarted bid for an 18th NBA title.

The fans had roared, chanted, and prayed for an improbable championship. But in the end, like their team, the saddened faithful were spent after the Game 7 loss, 83-79, in Los Angeles. The cheers turned to silence, the dreams were dashed, and a memorable season ended with a sudden, jolting thud.

“I feel heartbroken,’’ said Kasina Tremblay, 22, a Northeastern University student who watched the game at the House of Blues on Lansdowne Street. “It would be easier if it wasn’t such a close game.’’

At West End Johnnies on Portland Street, some fans cursed, some wept, and none of them wanted to watch the Lakers celebrate.

“The disappointment is extreme,’’ said Juztin Brown, 23, a body piercer from Malden.

“It’s disheartening,’’ said Sean Harrigan, 28, of Somerville, who watched the game at the Four’s restaurant and bar on Canal Street. “They finished off with a good season, a good playoff run, but it just wasn’t in the cards this year.’’

West End Johnnies owner Johnnie Caron had been feeling confident, even when the Celtics were down four points with two minutes left in the game. But his faith began to weaken when the Lakers kept the lead.

Caron tried to comfort himself by remembering the Celtics’ unlikely success this season.

“It’s been a great year,’’ he said. “They put it all out there this year. And people have to realize how special it is to go to seven games.’’

At Whitney’s bar in Harvard Square, the letdown was equally acute.

“It’s just too sad,’’ said Liz Balaconis, 21, a recent Harvard graduate. “I always hate walking out of a bar this sad.’’

“What can I say? Three quarters up and then we fall behind,’’ said Sawyer, who wore a Celtics cap and shirt. “But nobody thought we would get this far.’’

The loss seemed particularly painful because the Celtics had forged a 13-point lead in the third quarter. But after that point, just as the title seemed tantalizingly possible, the Lakers charged ahead and held on in the final desperate minutes.

Although the streets were fairly quiet following the game, the State Police announced that their NBA Finals operation made two arrests, in unreleated incidents. One person was charged with operating under the influence of liquor and leaving the scene of a motor vehicle accident that caused property damage. Another was charged with disorderly conduct and resisting arrest.

Near TD Garden, Boston police closed all streets east of Merrimac Street and west of North Washington Street at the end of the third quarter. But by 12:15 a.m., most police officers had been released from the scene.

Near Fenway Park, police officers on bicycles lined Brookline Avenue as hundreds of fans poured out of the bars after the Celtics game.

In the run-up to the title contest, the mood among Celtics fans was upbeat and expectant. By 7:30 p.m., 90 minutes before tip-off, the Four’s was packed. By 8:30 p.m., as the pregame television coverage began, the crowd began chanting, “Let’s go, Celtics!’’

Megan Daly, a 22-year-old bartender from Stoneham, sported green nail polish on her hands and feet.

The spacious, two-level bar had plenty of chairs and plush sofas, but few patrons bothered to sit.

“I can’t control myself,’’ said Chris Schindler, a 23-year-old warehouse manager from Woburn. Bouncing up and down, he screamed orders at the screen.

“Slow it down! Slow it down!’’ he shouted after the Celtics caught a rebound and began sprinting down the court.

At the Four’s, the crowd let loose with raucous cheers for every Celtics basket and chanted “Beat LA’’ until the final seconds. They booed whenever fanatic Lakers fan and movie star Jack Nicholson appeared on television. And although the bar was packed with deeply passionate fans, some patrons showed up just for the excitement.

On Lansdowne Street behind Fenway Park, from the Cask ‘n Flagon to the House of Blues, Celtics fans who could not get into the capacity-filled clubs waited in line, watched through windows, and screamed with each basket.

Paul Giese, 23, an accountant from Brighton, counted himself among the lucky fans who had made his way inside the House of Blues.

Giese said, early in the game, that “it would be the greatest day of his life’’ if the Celtics triumphed.

In Harvard Square, about 40 people gathered, some seated in chairs, outside Cardullo’s Gourmet Shoppe on Brattle Street to watch the game on a flat-screen television in the window.

To Steve Theall, 33, of Cambridge, a file clerk at the Massachusetts Water Resources Authority, this year’s team was special.

“They came from nowhere to being one of the best teams in the NBA,’’ said Theall, who wore a green sweatshir.

Dennis Coveney, 49, of Cambridge, said between puffs of a cigar, that his love for the team dates back to the glory years of the 1980s.

“It was Larry Bird, Kevin McHale, Dennis Johnson, Bill Walton,’’ he said, rattling off stars from that era’s team.

Although an 18th title was denied last night, not all faces were gloomy.

At West End Johnnies, Lakers fan Avin Jordan, a 26-year-old bouncer, said he had no plans to gloat.

“I’m not going to say anything,’’ Jordan said. “I don’t get caught up in any petty stuff. I don’t need to rub anything in anyone’s face.’’

And in Harvard Square, Jean-Pierre Coakley, 52, of Brookline, flashed a smile. The disabled veteran and ardent Lakers fan celebrated the result over a pint of Guinness at Whitney’s. 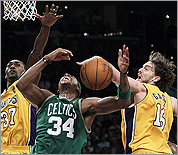