Rivers could be going out on top 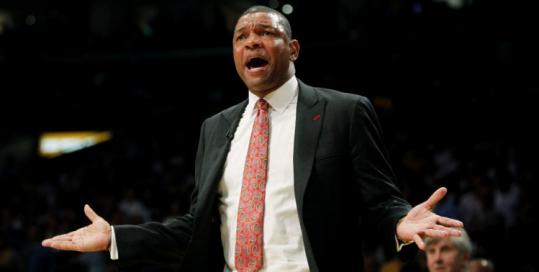 After six seasons watching over the Celtics, Doc Rivers may opt for a less-stressful life back home in Orlando with his family. (Bill Greene/Globe Staff)
By Dan Shaughnessy Globe Staff / June 16, 2010

LOS ANGELES — Who was the last Boston coach on a better roll than Doc Rivers in the spring of 2010?

We had Red Auerbach winning eight championships in his final eight seasons on the bench, then retiring from coaching at the age of 48 in 1966.

We had Dick Williams taking the Red Sox from ninth place to an American League pennant in a single season in 1967.

We had Bill Belichick spanking the heavily favored St. Louis Rams with one of the great demonstrations of coaching strategy in Super Bowl history.

Now we have Doc taking the Celtics to the brink of a world championship in a season in which his team played .500 ball (27-27) for four months and finished fourth in the Eastern Conference.

The Celtics were playoff underdogs against Cleveland, Orlando, and the Lakers. Boston did not have home-court advantage in any of those series. But the Celtics have managed to win twice in Cleveland, twice in Orlando, and once at Staples Center. Despite last night’s rout in Game 6, they can clinch the franchise’s 18th championship with a win here tomorrow.

There is a strong possibility this might be it for Rivers in Boston. He has coached the Celtics for six seasons and is ready to go home to Orlando to watch his kids play ball. His son, Austin, is one of the best high school basketball players in the country and will be a senior next year. What dad wouldn’t want to be there for that?

When the Celtics hired Rivers, they figured he’d move his family from Orlando to Boston. But just as Auerbach never moved his wife and daughters from Washington (Red lived in the Lenox Hotel for most of his coaching years), Rivers has not uprooted from Orlando. And now it’s probably time to go home.

Rivers doesn’t need the money. He has been making $5 million per year with the Celtics. He can always get an easy, cheesy TV gig. And when his kids are out of school, he can come back to the NBA as a Big Ticket coach.

Why would any smart coach want to return to the Celtics for the 2010-11 season? You don’t need a degree in hoopology to know that it’s going to go downhill from here. Ray Allen is a free agent. Paul Pierce can walk if he wants. Kevin Garnett has more miles than my 1987 Volvo DL wagon. There’s zero chance of the Celtics getting this far again next year. The notion that you could have a healthy Big Three again next May/June is pure fantasy.

Meanwhile, who wants another year dealing with knucklehead bench men Rasheed Wallace, Big Baby, Tony Allen, and Nate Robinson, and a cast of veteran superstars who often don’t get along (Pierce and Rajon Rondo were going at one another in the middle of the glorious Game 5 victory at the Garden Sunday night)?

If Rivers leaves, he’s certainly going out on top. In retrospect, his plan to take the foot off the accelerator in March and April has worked magically. The Celtics were smart to coast and get healthy. And that was Doc.

He gets bonus points for his manipulation of minutes. A lot of coaches would have given up on Tony Allen, but Rivers knew Allen could be useful against LeBron James and Kobe Bryant. He also knew Allen was the only athlete who could keep up with Rondo from baseline to baseline.

Rivers gave Marquis Daniels multiple opportunities, then sent him to the bench (where he belongs) for the playoffs. Rivers buried Robinson, but kept the little fella motivated, promising him he would win a game for the team in the playoffs. Robinson wound up winning two games.

Rivers is the one who had to cajole and calm Kendrick Perkins and Sheed to keep them from missing a game for picking up a seventh technical foul in the postseason. Rivers is the one who believed in Glen Davis after Baby broke his hand in a fight on the eve of the season. At the end of the year, when it mattered most, Baby had shifts against the Lakers in which he was the best player on the floor.

All in all, it amounts to good coaching. And a very hot hand.

After Game 5, Lakers coach Phil Jackson (10 championship rings) was asked about Rivers and grudgingly said, “I’ll tell you what he’s done well. He’s done well in attacking some of our weaker guys. He’s used his bench exceptionally well. I’ll give him a gold star.’’

If this is it, Boston is going to miss Doc Rivers.