‘You got to have faith’

Disappointed, fans hope Celtics can pull it off in Game 7 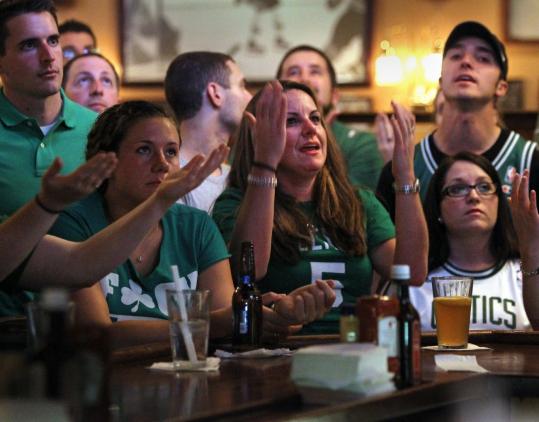 This story was reported by Peter Schworm, Travis Andersen, Meghan Irons, David Abel, and Brian Ballou of the Globe Staff. It was written by Schworm.

The Lakers started the game with a vengeance and built a 20-point first-half lead, dispiriting the legions of devoted Boston fans who gathered in jam-packed sports bars and living rooms across the city in anticipation of a series-clinching Celtics win and an 18th championship banner.

As the Lakers coasted to a Game 6 victory in a ho-hum second half, green-clad fans brushed aside their disappointment and dashed hopes for a victory party. While frustrated by the lopsided 89-67 defeat that evened the series at three games apiece, fans said they remained hopeful, if not fully confident, that the Celtics would rebound to defeat their archrival and hoist the championship trophy. Tomorrow, they said, was another day.

“You got to have faith,’’ said Laz McLaughlin, a 22-year-old from Mystic, Conn., who suffered through the rout at The Four’s, a sports restaurant and bar near the TD Garden that was packed for the game. “They have faith in each other.’’

Wearing a black T-shirt emblazoned with the faces of the Celtics’ starters, McLaughlin said she was certain the Celtics would win the series, even as the Lakers poured in point after point.

Her friend, Chris Schmidt, a 21-year-old from Westerly, R.I., shared her positive outlook. He wore a “Beat LA’’ T-shirt, and optimism on his sleeve. The team had come too far, and has too much heart, to lose now, he said.

At Fenway Park, where the Red Sox defeated the Arizona Diamondbacks last night, fans were strangely subdued as they filed onto Lansdowne Street, aware the more important game was going badly.

Jeff Trauschke, a 25-year-old from Western Massachusetts, made a beeline from the park to the House of Blues, where a host of large-screen televisions and a dour mood broke the bad news. Clad in a Paul Pierce jersey, Trauschke slouched in dejection. It was not what he had hoped for.

K.J. Nard, 29, had tracked the Celtics game from Fenway on his smartphone and knew things looked grim. Still, the Celtics had bounced back before, he said.

“I think Boston just needs to pull itself together,’’ the Brockton resident said. “I think we can do it.’’

As fans left Fenway near halftime of the Celtics game, police patrolled the area on foot and in cruisers. Fans lined up to get into standing-room-only bars, whose windows were darkened to prevent crowds from gathering outside.

Police had planned a large show of force around the TD Garden and Fenway Park to subdue a postgame celebration, and closed many streets in the area to cars in the second half. But many fans left the areas while the game was still being played, and crowds appeared subdued.

Across the street from the Garden, about 50 police officers wearing yellow vests and holding batons stood idly by as a few stragglers ambled out of the bars. Shortly before midnight, about half of the officers left. The same scene played out across the street, where dozens more police had gathered, and soon police had virtually disappeared from the block.

At West End Johnnie’s on Portland Street, a short walk from the Garden, a 200-strong crowd roared in support of the Celtics in the game’s opening minutes, often reaching a deafening decibel. But as the Lakers pulled away, the crowd fell quiet, and at times people even turned their attention away from the game and chatted among themselves.

Midway through the second half, with the Celtics showing no signs of life, a number of fans called it a night. It was too painful to watch.

But they vowed to be back in full voice for Game 7, and were confident they’d have more to cheer about this time around.

“They’ll come back with a vengeance in Game 7,’’ said Kyle Sandrock, 22, sporting a Kevin Garnett jersey and waiting for a cab outside Johnnie’s.

For the most optimistic fans, even the wide margin of defeat foreshadowed ultimate victory.

“When you lose like that, you have to come back really strong,’’ said Dave Sullivan, 22, of Boston. “So I think their chances are great.’’

Other fans didn’t buy that logic, and saw the rout as a bad omen.

“I’m a realist,’’ said Beth McCullough, 32, of East Boston, who was watching the game at The Four’s.

But her friend Samantha Homer wasn’t hearing it. The team that wins Game 5, she explained, usually wins the series. Plus, after such a magical, improbable playoff run, the stars were aligned for the Celtics.

While many fans flocked to sports bars in hopes of sharing a championship moment, others gathered with friends at home.

At Adler Eliacin’s spacious apartment in Roxbury, about 20 friends decked out in Celtics green T-shirts, pants, and dresses huddled in front of a 68-inch television, their hearts on the line.

“I wore this dress the last time they played,’’ said Kafui Tsaku, a 33-year-old administrative assistant from Roxbury who wore a flowing green dress.

With nearly nothing going Boston’s way, many threw their hands up in frustration, while others sat quietly with their arms folded. Others covered their mouths and sat on the edge of the sofa.

“This is frustrating,’’ said Flourence Toussaint, a 29-year-old property administrator from Cambridge. By the end of the half silence fell across the room.

At the House of Blues, a mix of Lakers and Celtics fans stared in disbelief at the unexpected rout. Austin Marks, a 29-year-old originally from Los Angeles, wore a Kobe Bryant jersey and a Lakers cap and said he couldn’t be happier.

Sheldon Thwaites, a 22-year-old from Mission Hill, could barely make eye contact with his friend. He couldn’t believe he was watching the same team that had just beaten the Lakers two straight times.

“It’s a great wake-up call,’’ he said, as if searching for a silver lining. But as his Lakers friends told him to look closer at the final score, he realized he couldn’t find it.

As the night of dashed hopes came to a close, Eliacin, the 36 year-old-recruiter who hosted the Roxbury party, may have summed up the feeling best with his optimism for a Celtics victory in Game 7.

“We might have lost this battle, but we will win the war,’’ he said.