THIS STORY HAS BEEN FORMATTED FOR EASY PRINTING
Lakers notebook 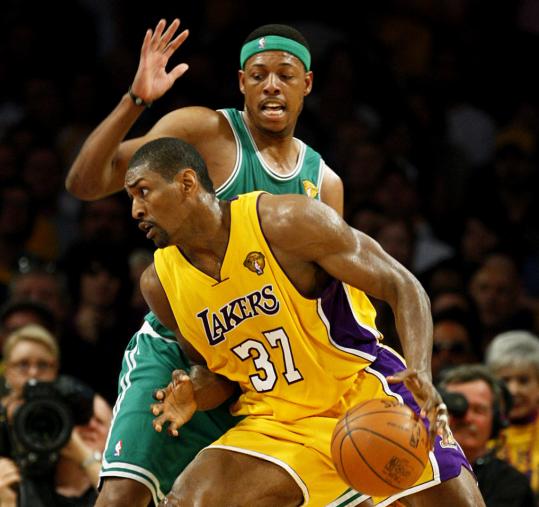 LOS ANGELES — Ron Artest promised he would be better after Game 5. He missed two critical free throws in the fourth quarter in that game, and admitted his defense was inconsistent.

The Lakers forward delivered last night by putting up 15 points and six rebounds and hit three 3-pointers in the 89-67 Game 6 blowout. It was the second time in the Finals that Artest scored in double figures, the first since Game 1, when he also had 15 points.

“Well, he made a shot,’’ Jackson said, referring to a 3-pointer by Artest nearly three minutes in. “It’s always great to make a shot when you’ve been struggling. It was good to see that ball go in. But we tried to simplify some things for him.’’

Artest drained 3 of 6 from 3-point range and 6 of 11 overall. Most of his contributions came in the first half when he scored 10 points. He also did a better job on Paul Pierce than he did in Game 5, limiting him to 6-of-14 shooting for 13 points. Pierce also committed five turnovers.

“Ron played extremely well on both ends of the [court],’’ Kobe Bryant said. “He was patient offensively and took the opportunities that were given to him. And defensively he made things tough for Paul, and Paul is a tough cover, and he did a good job on him.’’

Gasol rebounds
Lakers forward Pau Gasol came one assist short of recording a triple-double, but it didn’t take away from his contribution. Gasol bounced back from a disappointing Game 5 — when he scored just 2 points in the first half — to record 17 points and a team-high 13 rebounds and nine assists.

“That’s an important thing,’’ Jackson said. “Pau is an extremely good passer. He’s able to make plays out of his position, which is important for us, that someone makes some plays. We had, I thought, stilted offense in Games 4 and 5, and this helped open people up a lot, and he had some offense. He got creative and started playing the kind of post game we’ve been accustomed to playing in the postseason.’’

Bynum ailing
The close watch over Lakers center Andrew Bynum’s knee will continue today. Bynum asked to be taken out of the game in the third quarter because his mobility was limited because of more swelling. Bynum played 15:53 overall.

“He wasn’t able to move very fluidly the second half,’’ Jackson said. “He had some tightness in the back of his leg. He just said, ‘You’ve got to take me out. I can’t run.’ And it was obvious at that point that he couldn’t. He had some swelling in the back of his leg, and we’ll have to work on that and see if they can’t ice it down and control that.’’

The uncertainty around Bynum is a concern, Jackson said, but the Celtics may be dealing with a similar issue after watching center Kendrick Perkins go down in the first quarter with a knee injury. His status for Game 7 is unknown.

“Of course it concerns us,’’ Jackson said. “Both teams are playing without players at this time, and you just have to gut it through at this point in the season.’’

Seven’s up
The NBA Finals is going to a Game 7 for just the second time since 1994. The home team has won Game 7 of the Finals 13 of 16 times . . . Guard Derek Fisher has four NBA titles but this will be the first time he will play in a Game 7 for the championship. “They have a locker room of guys as well that have had phenomenal NBA careers, and I think they’ll recognize as well that this is a special moment that you just don’t get to be a part of — I don’t want to say every season — but sometimes never in your career,’’ Fisher said.