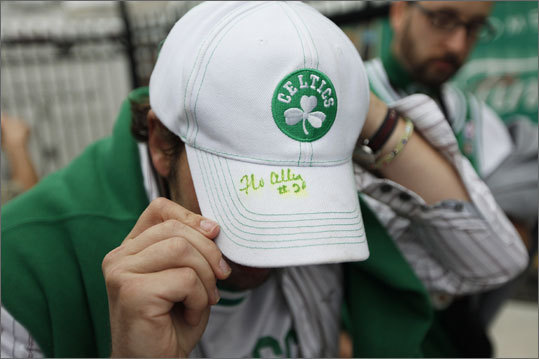 Before the Celtics take the court tonight, Lori Bruno will light a candle and make sure it doesn’t go out. Michael Kulczyk and his sister Nicole will rub a team logo within a framed picture of Paul Pierce. Teddy Foster will put on a jersey he has never washed and a hat signed by Ray Allen’s mother. Like other fans, he will embark on his ritual knowing a certain truth.

Among the superstitious, the Celtics’ chance to clinch tonight has turned Game 6 of the NBA Finals into a maelstrom of rites and obsessive behavior. Rituals involving crossed fingers, repetitive body movements, sacred meals, and anointed talismans that fans regard as the secret to victory would make a therapist swoon. But in the quest for a title across New England just now, it seems no neurosis is too large to indulge.

Foster, a 27-year-old from Manchester, N.H., will not only wear his ritual hat and unlaundered jersey, autographed by Pierce, but he might also engage in a brand of superstition that his father has used to thwart Lakers free throws. “I cross my fingers, put them behind my back, and cross my legs,’’ said his father, Ted.

When the elder Foster watches the game at home tonight, he will have to assure himself about the state of a row of Celtics photos on the wall. “They have to be in just the right order,’’ he said.

Legions will wear green, of course. Connor Hopewell, 9, of Foxborough will wear his lucky Celtics shorts. Rich Norton of Fredonia, N.Y., will stand before his sixth-grade social studies class in team colors.

“On game days, especially during the playoffs, I have to wear green when I teach,’’ he said.

But such routines seem merely quaint compared with more elaborate practices of fans who have refined rituals over years, honing them with almost scientific precision. Luca Andalo, a 36-year-old from Bologna, Italy, who has followed the Celtics since he was 10, always sits in the same position on the sofa, always drinks iced tea, and never eats.

Jim McMackin, 30, of South Boston holds his breath during Celtics free throws and, if things are going badly, spins his Celtics hat to reverse the other team’s momentum.

To skeptics or dour fans who might doubt the power of his maneuver, McMackin points out that he spun his hat in the fourth quarter of Thursday’s Game 4. “Look what happened,’’ he said. They came back with a late surge.

Similarly, some who have invented black magic conventions but then failed to adhere to them say they have learned from their folly.

Kulczyk, 21, of Johnston, R.I., and his 16-year-old sister wore their Pierce jerseys to Sunday’s game and this time made sure to rub the Celtics logos on their framed picture of Pierce before leaving home. “I didn’t rub it before Game 3, and they lost,’’ Michael said.

For some fans, ceremonial preparations can be shades of ancient rites. Ryan Dame, who feasts on opponent-themed meals, devoured some Kobe beef sliders at the Harp restaurant Sunday. He might have felt some heartburn while Kobe Bryant was scoring 38 points, but the Celtics won.

And then there’s Bruno’s ritual candle lighting. “It has to stay burning,’’ said Bruno, who’ll be watching with her family from home in Amherst, N.H. “And we usually eat chili. My son wears his [Kevin Garnett] jersey. We don’t talk about what might happen next for the Celtics or anything about the future. We keep it in the moment and try not to jinx them.’’

As usual when they go to a game, on Sunday they went first to Rabia’s restaurant on Salem Street and sat at their favorite table in front of the familiar window. Tonight, they’ll watch with their dogs, who’ll be wearing Celtics collars.

“As far as we can tell, none of this makes any difference,’’ Chuck said. “But we do it anyway.’’

And, as McMackin said of his hat-spinning, “It can’t hurt.’’

Bill Porter can be reached at wporter@globe.com.