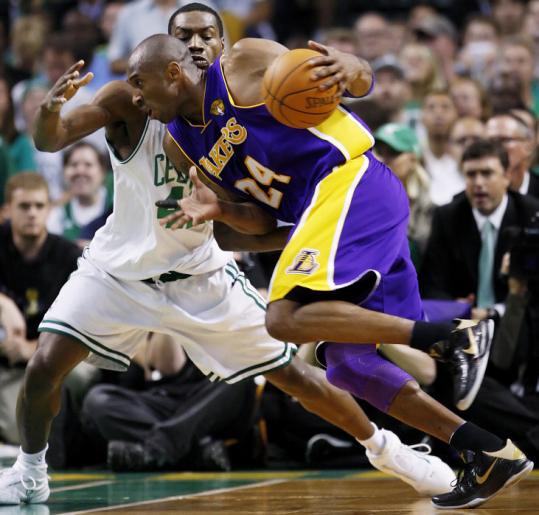 You hear it all the time.

“Kobe needs this for his legacy.’’

If the Lakers prevail over the Celtics in the Finals, that will give Kobe Bryant a fifth ring. He’ll play next season at age 32, and because he plays for the better of the two teams utilizing Staples Center as a home court, there is a reasonable chance he could win additional rings.

But that’s not the point. To suggest that he needs X number of rings to cement his legacy carries with it the implication that it is his sole responsibility to provide Laker teams with a championship. That is simply not the case.

No one, not even Bill Russell, ever won an NBA championship by himself, and no one ever will.

Bryant is a great player who has played a major role in the winning of multiple championships. I’ll give you that, and only that.

If his career ended with last night’s game, he would have had an extraordinary one. He was just rewarded with his eighth selection as a first-team All-NBA player, to go along with two second teams and two thirds. He has likewise been named to the All-Defensive first team for the eighth time, in addition to a pair of seconds.

And he has the four rings.

However many championship teams he winds up playing on, the big question left as his career winds down is just where he ranks in comparison to the acknowledged Holy Trinity of NBA megastars (non-center variety): Michael, Magic, and Larry. The absolute very least anyone can say is he already belongs in a discussion that would also include Oscar and Jerry (it’s understood that no last names are needed).

But Kobe is the most intriguing challenger to Jordan’s generally-accepted supremacy because he most approximates Jordan in terms of size, range of offensive skill, defensive prowess, and that wonderfully elusive quality, killer instinct. Not even Jordan had a nickname carrying the chilling imagery of a “Black Mamba.’’

There is no prize to be won here, nor is there a rigid set of standards. Jordan is the leader in the clubhouse for many reasons, one of which is he always remained likable as a player and sportsman. As vicious as we’re told he was to some teammates behind those closed practice doors, he always projected himself nobly in public. He never did the wrong thing in the course of his professional duties and he was always very careful in his public utterances.

Kobe has never quite learned how to pull that off. He has been particularly petulant during these Finals, acting as if he is the first superstar who’s ever lost a game, or who has ever been subjected to any kind of public inquiry. It could be, however, he is taking his cue from his coach, who has an M.C. degree (Master of Condescension). Oh, wait, Michael had that very same coach during his glory years, and this was never an issue with him. So never mind.

I just hope no one is waiting until Kobe gets six rings before deciding whether he is Michael’s physical equal. I won’t go so far as to suggest that rings are circumstantial, but they are the product of multiple forces that transcend the skill of even the greatest virtuoso.

We might as well start with Russell, who won 11 rings in 13 tries and who was the only player on the 11th titlist who also played on the first. No player ever caused more rivals to pound their fists against the blackboard or broke more hearts among enemy fandom than Bill Russell.

But as many shots as he blocked or rebounds he grabbed, he wasn’t a big scorer, and someone had to put the ball in the basket for the Celtics to win. Those somebodies were named Heinsohn, Sharman, Cousy, Ramsey, Jones (Sam), Havlicek, Howell, and Nelson, with help from the likes of Naulls, Sanders, and Siegfried.

There have been great big men, but they all needed help to win a championship. Mikan needed help. Russell needed help. Wilt needed help. Kareem needed help. Olajuwon needed help. Shaq needed help. The closest any great center came to winning a Finals, virtually by himself, was Kareem against the Celtics in 1974, when he averaged 33 points, 12 rebounds, and 5 assists and shot 52 percent from the floor. It still wasn’t enough to get the job done.

Magic was great, for sure, but he never won a championship without Kareem. Larry had two Hall of Fame frontcourt teammates for the last 12 years of his career, and he was through winning titles before he was 30. Jordan didn’t really get close to a title until he was teamed with Scottie Pippen, and you can throw Horace Grant and Dennis Rodman in there, too.

Teams win. On every championship team someone has to do the dirty work on the boards and on defense. Sometimes there are X-factor guys such as Robert Horry, whose timely 3-pointers have helped produce championships for both LA and San Antonio. If the Lakers win this series, they can point to the Derek Fisher fourth-quarter explosion in Game 3, an 11-point contribution that did not include even one of his signature 3-pointers.

And should the Celtics win, it will have been all about team. The Big Three exist no longer. They are now simply quality veterans who have it some nights, but not others. Rajon Rondo, for all his hype, won’t get to the top class of point guards until he makes more jump shots and stops missing free throws. But the Celtics got to a 2-2 status because people such as Big Baby Davis, Rasheed Wallace, Tony Allen, and Nate Robinson have pitched in. The 2010 Celtics are no longer about stars and future Hall of Famers. Overt displays of individuality now hurt the team, at both ends.

The Celtics have already played, and beaten, teams led by three-fifths of the 2010 All-League team. Kobe is a fourth member. It’s something to keep in mind.

Kobe may yet have a big game in him, but he will not win the series all by himself, not against this Celtics team. If he doesn’t wind up on the winning side, it won’t be his “fault.’’ It will be his fate.

It’s nice to be reminded that all our cherished team sports remain team games.