THIS STORY HAS BEEN FORMATTED FOR EASY PRINTING
Courtside chatter 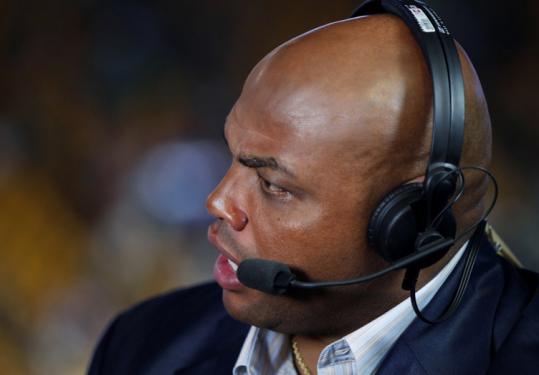 Charles Barkley’s sense of humor shines through as he completes his 10th season as an analyst for TNT and NBA TV. (Yoon S. Byun/Globe Staff)
By Gary Washburn Globe Staff / June 14, 2010

After another fun-filled season working for TNT and NBA TV, Charles Barkley hasn’t changed his mind: He wants to be an NBA general manager.

The itch to delve into management has increased for the Hall of Famer and he feels qualified to run his own team. But he has a list of stipulations. Barkley is not going to take over a team that has no intentions of winning.

And the Chuckster wants full control.

Barkley is completing his 10th year as an analyst and is unquestionably one of the best in the business. His brutal honesty, sense of humor, and chemistry with fellow analyst Kenny Smith and host Ernie Johnson (on TNT) and Matt Winer (on NBA TV) draws viewers.

He said he is happy, but making personnel moves and roster decisions motivates him. The question is whether the NBA hierarchy will take the fun-loving Barkley seriously.

“It would have to be an organization that I trust that is trying to win,’’ he said. “The biggest misconception about sports is that all these teams are trying to win. Some of these teams are just trying to make money, across the board in all sports. I want to be in a situation where I can be successful because like I said, I got a great situation here.’’

Barkley has talked with some teams but he is not going to “go out of my way’’ to seek a management job. He believes his reputation and knowledge should speak for itself, and, added, the league has “hired worse guys than me.’’

“I know I would do a good job, but the key is you’ve got to surround yourself with good people,’’ he said.

When asked how he would deal with today’s players, some of whom don’t have the desire of the players of Barkley’s generation, he said, “That’s one of the reasons I will never coach. I think it’s a little bit easier as a general manager because you can trade those [expletives]. It’s an honor and privilege to play in the NBA. They got guys making money who can’t play. A lot of money. That’s the only thing that bugs me.’’

Barkley is intent on becoming a GM but his time with TNT has not affected his approach toward life. He realizes his role is to offer some humor along with analysis.

“We’re just talking about basketball, we’re not saving the world,’’ he said. “You look at the oil spill, the floods in Arkansas, that’s serious [stuff]. We’re just talking about a bunch of multimillionaires. The players know I am going to be fair and honest. I’ve criticized Kobe [Bryant]. I’ve criticized LeBron [James]. When you are on TV, I think it’s really important to be honest. The only thing this job has done for me is I realize what a [jerk] some of these players are.’’

Catching up with Cowens
Hard to believe it has been 30 years since Dave Cowens donned a uniform for the Celtics. He won two championships in Boston, bridged the John Havlicek era, and is considered one of the fiercest competitors in team history. Cowens has just finished construction of a home in Maine and is enjoying some free time before perhaps jumping back into the coaching game.

The only thing missing from his remarkable career was facing the Lakers in the NBA Finals. His Celtics teams defeated the Bucks (in 1974) and Suns (in ’76) for the championship.

Cowens played with the Celtics during Larry Bird’s rookie season, then returned for a brief stint with the Milwaukee Bucks in 1982-83. Cowens said he does not regret playing longer for the Celtics since he missed the 1981 NBA title run.

“If I would have been making the money they are making now, I still would have been playing,’’ he said with a laugh. “I’m good. I got a taste of it. I love being around the area. I’ve done a lot in the community over the years so I have made my contributions. No matter what you do in life you have to understand that humility is a big part of who you should be.

“For me, working with all the players and starting a sports museum, you have to feel grateful to be around these people and spend time with them. You have to count your blessings because not everybody gets that opportunity.’’