Ailing knee keeps him out of play 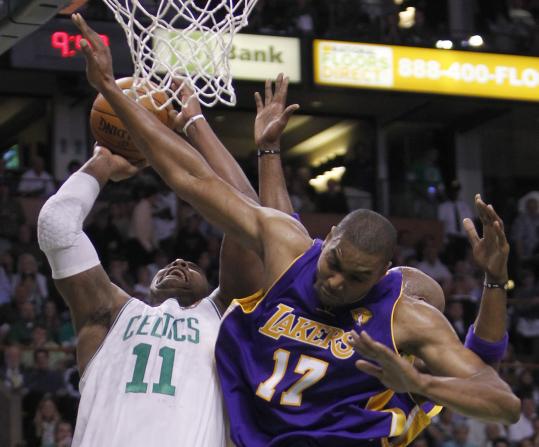 A few seconds into Game 4 last night, Lakers center Andrew Bynum realized his knee might not hold up. And now Bynum and his teammates will have to wait and see if he can answer the bell for Game 5 Sunday night.

Bynum logged just 12 minutes, by far his fewest of the NBA Finals, leaving a void in the paint the Celtics were able to exploit in their 96-89 victory. The Lakers were beaten on the boards, 41-34; outmatched in the paint, 54-34; and stumped on second-chance points, 20-10.

“Obviously we miss Andrew when he’s not out there because he’s been so effective just blocking shots and rebounding,’’ forward Pau Gasol said. “Those two things alone are a big plus when he’s out there for us and it’s something that we’re going to need to continue to work on the next game.’’

Now the Lakers may have to face the possibility Bynum may not be available Sunday. Bynum said a combination of pain and an inability to move effectively caused him to sit out a majority of the second half. He did not start the third quarter and played just 1:50 before sitting the rest of the game.

“It bothered us in the second half not having Andrew be able to come out and play,’’ Lakers coach Phil Jackson said. “He tried a couple of minutes, but it just wasn’t there for him. We’re glad we have a couple days off and we can kind of get him back hopefully in position where he can help us out again.’’

There wasn’t any particular play that exacerbated Bynum’s injury last night, but the 7-footer did tweak his knee late in the third quarter of Game 3. After that game, Jackson said Bynum would be questionable but Bynum was determined to play last night. About 30 seconds in, Bynum knew he was in trouble.

The swelling increased, he struggled to push off, and he felt about two steps slower than he should. Bynum expects his doctor from New York to come to Boston to examine the knee.

The good news for Bynum is that he has two days to rest up. He is hopeful he can play through it.

Without the Bynum, the Lakers’ frontcourt looks like the 2008 group that was dominated in the Finals by the Celtics. Gasol is a stronger presence than he was two years ago and Lamar Odom would be expected to take on more of a role like he did in 2008 when Bynum was sidelined with a knee injury. But Bynum gives the Lakers size in the post, averaging 7.3 rebounds and making big plays like his seven blocks in Game 2. He also averaged 13.3 points and 32 minutes in the first three games of this series.

If Bynum is limited or out for Game 5, Gasol believes the Lakers will have the answers.