This time, the visitors don't fade away 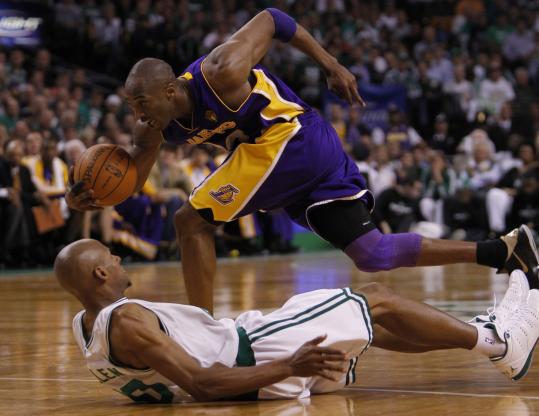 It’s trendy around these parts to mock the manhood of the Los Angeles Lakers. The fundamental rules apply as time goes by. Graduation season rolls around, the Celtics and Lakers play in the Finals, and the lunchpail Boston bullies prevail because they are tougher when the clock nears midnight.

Not last night. On the second Tuesday of June, in the third game of the 2010 NBA Finals, the Lakers made a statement on the parquet floorboards. The Phil Jackson Five took a punch in the mouth, stood tall, and beat the Celtics, 91-84, to take a two-games-to-one series lead in what is shaping up as a grand and grueling match of modern mastodons.

It’s been nearly a half century since Bill Russell regularly thwarted the Lakers and almost 30 years since the inferior (1984) Celtics somehow willed themselves to victory over the clearly more talented LA Showtimers. When the Celtics came back from a 17-point first-half deficit last night, spoiled Boston fans watched their heroes slowly cut into the lead and waited for the inevitable moment when the locals would overtake the LA Fakers.

Derek Fisher reminded the Celtics and their fans that this is not 2008. These are not the same Soft Shell Angelinos who blew a 24-point lead in Game 4 of the 2008 Finals. They are not the dogs who were routed by 39 points when they last played a championship game on Causeway Street.

“Our thoughts were on how disappointed we were losing that second game on our home court more than on what happened here two years ago,’’ said Fisher. “We didn’t doubt our ability to win here, though we hadn’t done it in the playoffs. We understand when you want to be the best you have to win whenever, where ever.’’

After trailing most of the night, the Celtics pulled to within 2 points three times and faced an 84-80 deficit with just under a minute to play when Ray Allen waded into the left corner for a 3-point shot. This was not the same Ray Allen who rained threes at Staples Center Sunday night. Allen missed every shot he took in Game 3. He went from Tom Brady to Tony Eason in two short days.

Allen was sitting on an 0 for 12 when he hoisted his final, fatal three.

The redoubtable Fisher (16 points, 11 in the fourth) rebounded the miss, raced down the left side, and hurled himself toward the hoop as a gang of Celtic defenders closed in. Fisher converted the basket and was fouled in the process.

In Laker lore, this was up there with Magic’s baby hook over Kevin McHale and Robert Parish in the waning seconds of Game 4 in the Old Garden in 1987.

“Derek had made a number of plays in the fourth quarter,’’ said Jackson, now two victories shy of his 11th championship. “He saw the opening and went, and made a very bold play. It was one-on-four. It’s imperative that it goes in.’’

“I was just trying to advance the ball,’’ said Fisher. “I saw [Kevin Garnett] coming up and the angle he took. I knew I could get around him. Once I broke through him, I saw they didn’t have anybody at the basket so I just took the direct line.’’

Fisher made the shot as he was bounced to the floor by Glen “Big Baby’’ Davis.

“Derek Fisher was the difference in the game,’’ said Celtic coach Doc Rivers. “He won the game for them. I thought we lost our composure. We let Derek Fisher go up the court and get a 3-point play. He’s just a gutty, gritty player. Fisher basically took the game over.’’

Rivers was generous and compassionate regarding Allen’s amazing oh-fer. This was the same Ray Allen who scored 32 and made a Finals record eight threes in Game 2. It strains the imagination to come up with a similar two-game disparity.

“It’s a hell of a swing,’’ said Rivers. “It’s basketball. He’ll be back tomorrow and get ready for the next game. I thought all of his shots looked flat tonight. He was short on most of his jumpshots. Of the 13, he got about eight great looks and was short on all of them.’’

LA led for the final 37 minutes.

Free-wheeling off the energy of “Beat LA’’ and “I’m Shipping Up to Boston,’’ the Celtics bolted to a 12-5 lead. Smug Green Folk contemplated the likelihood of a three-game parquet sweep and a banner No. 18 clinch party Sunday night on Causeway Street.

The Lakers interrupted the big fun with a quarter-closing run of 21-5 to take a 26-17 lead at the end of one. The rightfully insulted visitors ran to a 37-20 lead in the second. It was 52-40 at intermission and 67-61 after three. Then came the surge which fell short when Allen’s final heave landed in the hands of Fisher.

“[Tomorrow] night they’re going to come back with a renewed sense of hunger,’’ said Fisher.

Indeed. There is much new work to be done for the men in green. Home court advantage is gone again. If these Celtics are going to win banner No. 18, they’re going to have to do it 3,000 miles away in the face of Jack Nicholson. And it appears that the 2009-2010 Lakers do not intend to choke.

Dan Shaughnessy is Globe columnist. He can be reached at dshaughnessy@globe.com.