When guards mesh, they court success 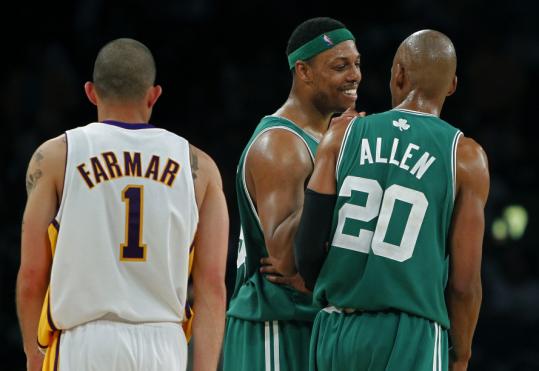 Paul Pierce did something the Lakers failed to accomplish in Game 2 — stop Ray Allen, if only just for a quick chat during the fourth quarter. (Jim Davis/Globe Staff)
By Frank Dell’Apa Globe Staff / June 8, 2010

The Celtics are defying trends with their backcourt. Ray Allen, the shooting guard, is challenging the actuarial charts by setting records at age 34. And Rajon Rondo is a nonconforming point guard, unconventional in his shotmaking and unselfish in his playmaking.

Allen and Rondo were at their symbiotic best in a 103-94 victory over the Lakers in Game 2 of the NBA Finals Sunday. Allen scored 27 points in the first half and Rondo totaled 10 points in the final 5:41 of the game. The rest of the time, Allen was decoying the Laker defense and defending Kobe Bryant, and Rondo was choreographing and rebounding, especially the latter.

“He’s so athletic, he does so many different things, and that’s probably something people don’t realize,’’ Allen said of Rondo. “He’s so unheralded when he gets in there getting the rebounds because he’s so athletic. One rebound, he went to the roof, and it seemed like he went over all the bigs. But that does give us another dimension when he can rebound like that.

“It does take the pressure off our bigs to have double-digit rebounds every night, when our guards are getting it. Sometimes they’re bouncing long, that’s the difference in our offensive rebounds that they didn’t get; we got those rebounds. A lot of the onus is on the guard, because if they bounce long we have to get those and he got them.’’

Allen set a Finals record with five 3-pointers in a quarter, one short of the Celtics’ playoff record held by Antoine Walker. Allen was especially focused in practice following Game 1.

“Well, I was upset,’’ he said. “The way I went into practice, I was disappointed that we lost. I was trying to think of the things that I need to do to be better. So, when I went to practice, I wasn’t in the best of moods. I was ready to get through practice and do the things we need to do, at least to relieve some of the tension we had as a team and I had individually.

“So, being on the same page, and that’s kind of how I felt. I felt I was just in limbo, like I’ve got to hurry up and play another game. It’s like that feeling when you lose during the regular season on a Monday and you play again on Tuesday, you can’t wait to play on Tuesday back-to-back. I definitely was there but I’ve got to keep that. Coming into the game I just focused on being the best team player I could.’’

But before Allen and Rondo could show their offensive stuff, the Celtics had to get their defense right.

“The only way to be able to get Rondo in transition, we had to get multiple misses, multiple stops,’’ coach Doc Rivers said. “And, if we did that, and our bigs ran, we thought we could get our shooters open.’’

Rhythm and reason
Bryant committed his fifth foul early in the final quarter, but Rivers said the Celtics did not factor that into their strategy.

“As long as it’s in rhythm,’’ Rivers said of attempting to get Bryant to foul out. “I could hear the players talking about it when we were in the timeout. I kept saying, ‘guys, stay within the rhythm of your offense.’ I believe when teams try to get that sixth foul, they lose their rhythm, the ball stops moving, and you usually don’t score or get the foul. We would have loved to have got his sixth foul, but we were not going to do it out of the rhythm of our offense. We would have loved to have attacked him, but we were fine with that.’’

Frank Dell’Apa can be reached at f_dellapa@com.