Odom has made poor impression 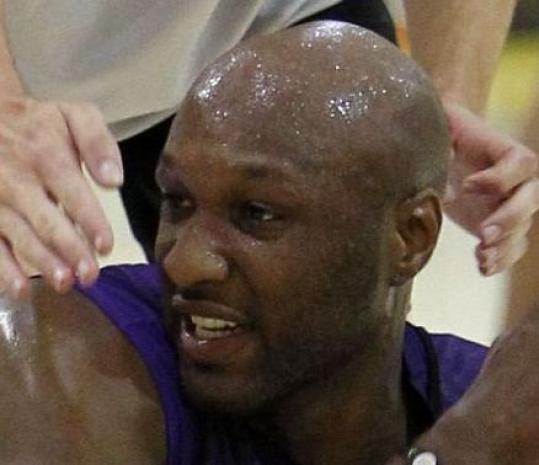 Lamar Odom has logged time in each of the two games in the NBA Finals. He has touched the ball. Tossed up shots. Run the floor. But he has been absent.

The Lakers forward and sixth man hasn’t contributed much this series. In the Western Conference finals, Odom averaged 14 points and 11.8 rebounds in 34.3 minutes in the six-game series against Phoenix. Against the Celtics, those numbers have plummeted to 4 points and 4.5 rebounds in 18 minutes a game.

Instead of racking up minutes, rebounds, and points, Odom was gathering fouls. In both games, Odom fell into foul trouble and his playing time was limited. He had five fouls in each game, picking up three in the first quarter of Sunday night’s 103-94 Game 2 loss to the Celtics.

“It’s two games in a row, both on drives against Paul Pierce,’’ Odom said. “It took me out of the game. I was only able to play 14 minutes [Sunday]. I couldn’t really contribute much, just in spirit. That’s the way the ball bounces sometimes.’’

Odom has a reputation of being inconsistent and that characterization is following the 11-year veteran into the Finals. After averaging a double-double heading into the series, Odom mustered 5 points and five fouls in 21 minutes in Game 1, but the Lakers won, 102-89. But with a hot-shooting Ray Allen and a show-stopping Rajon Rondo in Game 2, the Lakers couldn’t afford to have so little production from Odom.

Odom picked up his second foul at the 1:21 mark of the first quarter. As Lakers coach Phil Jackson debated taking him out, he picked up his third foul.

“Again, my fault,’’ said Jackson Sunday night. “He got, bang-bang, two fouls immediately, and I turned to my crew and said, ‘Do you think he can play through this?’ And as I was talking to them, he got his third foul. So obviously, he couldn’t play through that sequence. He just basically got in the ball game and got those three fouls and it really took him out of the ball game. That’s a bit unfortunate for him. He’ll get a chance later on in this series to redeem himself.’’

Jackson said the Lakers have to move players around without Odom, such as shifting Pau Gasol from the wing to the post and Kobe Bryant from guard to the wing. Odom is aware of his lack of contribution, but he isn’t giving up on his opportunities.

“If I’m out there I’m going to produce,’’ he said. “Plain and simple. I’d rather be out there and play bad than not have a shot.’’

In 2008, Odom started all 21 playoff games and averaged 14.3 points and 10 rebounds a game. He started because center Andrew Bynum was out with an injury. Against the Celtics in the Finals, he averaged 13.6 points and nine rebounds in the six-game series.

The following year, Odom played in all 23 postseason games, averaging 12.3 points and 9.1 rebounds in 32 minutes as the Lakers captured their fourth NBA title since the 1999-2000 season.

Odom understands the importance of the games in Boston.

“They don’t really change,’’ Odom said. “You have to have a sense of urgency in every game you play.’’

Monique Walker can be reached at mwalker@globe.com