Robinson to the rescue for Rondo again

Comes off bench to provide spark 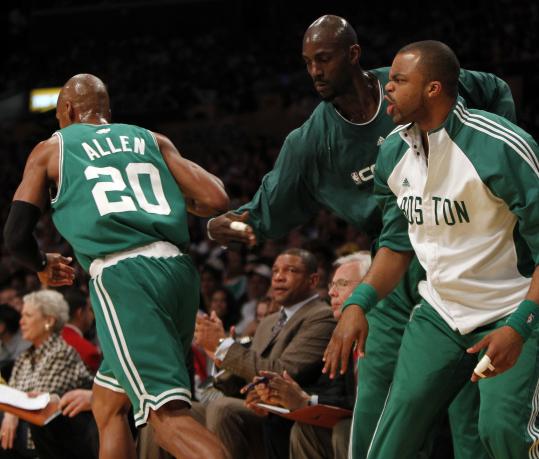 He played nearly 3,000 minutes during the regular season and nearly 750 in the playoffs, with back tightness and muscle spasms cropping up as the postseason wears on. Last night, Rajon Rondo admitted he was due for a couple minutes’ rest.

But in his absence, the Celtics needed a reinforcement. Enter Nate Robinson. He was two games removed from a breakout performance in the Celtics’ Eastern Conference finals clincher against Orlando, and with Rondo on the bench last night against the Lakers, Robinson gave another boost in the Celtics’ series-tying 103-94 win in Game 2.

Down, 80-78, after an Andrew Bynum dunk, Robinson drilled a 26-foot 3-pointer that gave the Celtics a 1-point lead. After a Tony Allen steal, he finished a fast break with a layup to put the Celtics ahead, 83-80, and cut off a Lakers’ run.

He scored all 7 off his points in the fourth quarter, spelling Rondo and the starting point guard was the first to recognize how valuable his minutes were.

“Nate played great,’’ Rondo said. “It’s the second time Nate’s done that this [postseason]. He was ready when his name was called.’’

Celtic coach Doc Rivers, who has gone with Robinson in three straight games, echoed the sentiments.

“I thought the [time] that Nate Robinson played for us was huge,’’ Rivers said. “Rondo was exhausted. We needed offense. Ray [Allen] was exhausted in that period, in that stretch, and we put Nate in and just one pick-and-roll and he scored, and he created scoring, so that was big for us.’’

Fouls a factor again
The Celtics dealt with foul trouble for a second straight game, the whistles following Kevin Garnett (five fouls) whenever he touched the floor. The bench — from Glen Davis (8 points, 7 rebounds) to Rasheed Wallace (7 points, 7 rebounds) — compensated by chipping in 22 points and 15 rebounds.

“The bench was huge, all of them,’’ Rivers said. “We were in foul trouble two games in a row now, and the fact that we had a lead was huge for us. The rhythm for us offensively is tough when all your bigs are in foul trouble.

“We have a certain rotation that we want our bigs to play, and obviously it was blown up within four minutes of the game because of fouls. I thought Rasheed was huge. You could see him struggling with the back, but he gave us as much as he could give. And Baby was huge.’’

Good timing
With the NBA draft June 24, Celtics president Danny Ainge is pulling double duty while in Los Angeles, watching the Finals and checking in on workouts.

“In some ways it makes it easier,’’ Ainge said. “It can be tough to fit in your schedule, so it’s good you don’t have to juggle East Coast and West Coast. I’ve been spending time this week looking at guys. It’s a big group, about 60 guys. I don’t want to pinpoint any guys.’’

The Celtics have the 19th pick and Ainge said the selection will be based on the best player available.

“The draft preparation works out well,’’ Ainge said. “Usually, I come out to LA anyway because there’s always a couple players working out. Sometimes it’s easier to go to workouts than to bring them in. So it’s no different this year.’’

A better break
Rivers said two days off was more welcome than the five-day break the Celtics had before Game 1.

“I don’t mind the two-day break at all,’’ Rivers said. “Two or one. For us, a two-day break has to have some benefit, especially as you guys have all said we were old the last 24 hours. We need this break, guys, we’re so darned old.