THIS STORY HAS BEEN FORMATTED FOR EASY PRINTING
Commentary

McHale has lasting memories of rivalry 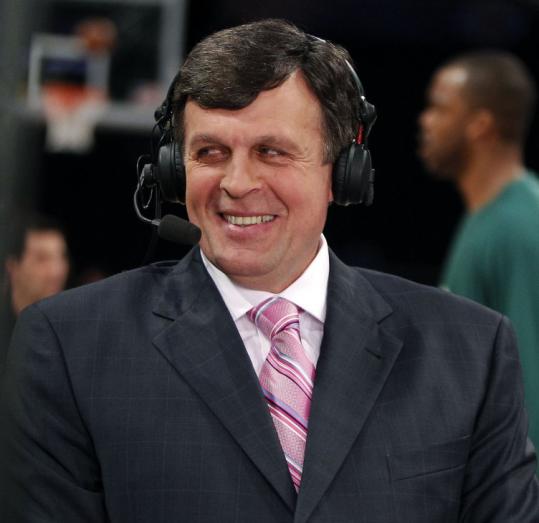 Kevin McHale, now an analyst for NBA TV, is still a part of the Celtics — he was the man who traded Kevin Garnett to Boston. (Jim Davis/Globe Staff)
By Dan Shaughnessy Globe Staff / June 7, 2010

LOS ANGELES — He won three championships with the Celtics. When we compile Boston’s all-time starting five, Kevin McHale still gets a spot in the lineup along with Bill Russell, Larry Bird, John Havlicek, and Bob Cousy.

McHale is Celtic royalty. And he’s very much a part of what’s happening with the Celtics today because he’s the man who traded Kevin Garnett to Boston for Al Jefferson, Gerald Green, Sebastian Telfair, Ryan Gomes, Theo Ratliff, cash, and two draft picks (one turned into the immortal Wayne Ellington) in 2007.

It’s been suggested that McHale deserves to have his No. 32 retired a second time. That’s how much we love what he did for the Green when he dealt Garnett to Boston.

The trade didn’t play real well back home, where McHale and his wife raised their five children. McHale wound up getting fired by the Timberwolves, for whom he had worked since 1994. Last night he was back around the Celtics in his capacity as an analyst for NBA TV.

Asked if he took grief for the Garnett deal, McHale said, “Nah. I think for our franchise we got a couple of extra first-round picks. That’s what we were trying to do. There was a major concern from our owner about a contract extension and paying that money out to Kevin, what his agent was asking. It was more of a financial decision. His agent said he wanted a contract extension and our owner said, ‘We’re not giving it to him,’ and I said, ‘Well, we’ll either let him go for nothing or we’ll trade him.’

“When you’re trying to trade a guy that makes $25 million, there’s very few takers in the NBA, I can tell you that right now. One of the teams we were talking to was LA, but I was afraid of [Andrew] Bynum’s knee. Then Al, of course, tore his ACL last year. You never know. It kind of came down between Al and Bynum.’’

It wasn’t the first time McHale and Danny Ainge tried to get the better of one another. They are close friends, dating to their Celtics days.

“Danny and I talk all the time,’’ said McHale. “Back in the days when we played, when we played cards, he said it wasn’t gambling, it was stealing. I said those are both bad. He was a bad Mormon. Now he’s a good Mormon.’’

If Doc Rivers leaves the Celtics at the end of these playoffs, McHale’s name will surface as a potential successor.

“I never say never, never say always,’’ said McHale. “But I wouldn’t get too excited about that.’’

When the Celtics play the Lakers in the Finals, McHale’s name always comes up because of constant replays of his infamous takedown of Kurt Rambis in Game 4 of the 1984 Finals.

“M.L. Carr was yelling, ‘Someone’s got to go down! They’re running us out! Someone’s got to go down!’ And after hearing that, I knocked [Rambis] down and I said to M.L., ‘You caused that.’ It was an M.L. Carr-induced foul. Luckily, I didn’t get fined. That’s the funny thing. Back then, it wasn’t a technical. It wasn’t anything. It was just two free throws. Now I might be banned from the league. It would be a three-year banishment.

“It takes you back, but that was a long time ago. These guys are building their new history right now. When you’re playing, you’re just trying to win the next game. Someone said how Kobe [Bryant] said he doesn’t care about what happened back then. He’s right. How can you play if you’re thinking about what happened in 1969 with Bill Russell and Wilt Chamberlain?’’

Any memories of Magic Johnson’s baby hook, which won Game 4 of the ’87 Finals at the Garden? McHale is in the photo, alongside Robert Parish.