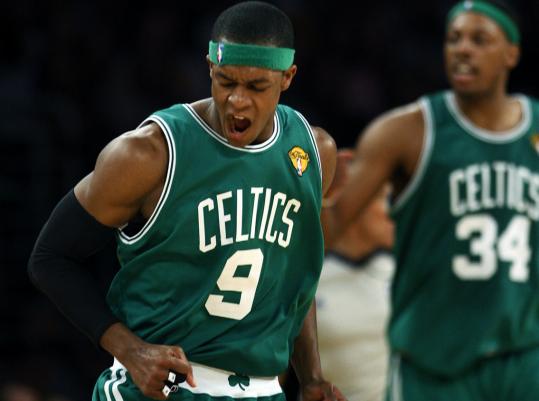 LOS ANGELES — Rajon Rondo started getting on his triple-double kick in the playoffs last year, piling up numbers in losing causes. That streak helped Rondo in contract negotiations a few months later, though Celtics president of basketball operations Danny Ainge had to talk Rondo down to $11.5 million per year. It was an investment that has paid off this season, and Rondo confirmed it with his performance last night.

Rondo had 19 points, 12 rebounds, and 10 assists — and this time the triple-double meant something — as the Celtics took a 103-94 victory over the Lakers, evening the best-of-seven NBA Finals at 1-1.

And, Ainge again had a role in guiding Rondo.

“DA — Danny Ainge — told me before the game, try to get a lot of [field goal attempts] up,’’ Rondo said, “and I did — I didn’t shoot extremely well but I was being aggressive. And, if we lose the game, I want to go out being aggressive, I don’t want to hold anything back.’’

For the record, Rondo connected on 8 of 18 field goals.

Rondo sprinted through the first three quarters, and acknowledged being “exhausted’’ as he was relieved by Nate Robinson at the start of the final quarter. Then, after a pit stop, Rondo shifted into gear. And though Rondo set everything up with his all-around play, it was his shot-making that clinched the victory.

The last six minutes of the contest were typical Rondo — from the creative, resourceful shooting to the two missed free throws, to blocking a Derek Fisher jumper, to poking away Kobe Bryant’s dribble, then squandering a fast-break opportunity with a chance to clinch the result.

The game was decided as both teams went with the starters for the final 6:16. After that, Rondo scored 10 points (a jumper, a lefthanded second-chancer, two layups, two foul shots) and had a steal.

After Bryant’s 3-point play gave the Lakers an 88-85 lead with 5:58 remaining, Rondo got things going by converting a pull-up jumper. Then, Rondo drove for a layup. After a Bryant miss was rebounded by Kevin Garnett, Rondo got a follow for a 91-90 Boston lead with 3:21 remaining. Garnett committed his fifth foul, but continued to stay close to Pau Gasol and earned a turnover. Then, out of a Celtic timeout, Rondo’s penetration caused a mismatch, and he found Garnett for a shot over Ron Artest. Rondo was rightly not credited with an assist on the play. Rondo then blocked a Fisher 20-footer from behind, leading to a two-on-one break — but Rondo dished to Ray Allen, who missed a layup, the Celtics maintaining possession. Allen then missed off the inbounds play, but Garnett won a duel with Gasol to keep possession. This time, Allen found Rondo for a 95-90 edge with 1:50 left. Coach Doc Rivers’s timeout sprint prevented a Celtic turnover, leaving Rondo a second to inbound.

“It was kind of hectic,’’ Rondo said. “Artest and Kobe were trying to trap me, so I was trying to dribble around, and [the shot clock] got down to 17 seconds. And Doc did a great job of calling the timeout.’’

After being stifled in a Game 1 defeat, Rondo benefited from the Celtics’ ability to get into a transition mode.

“I think when I rebound I’m able to start the fast break myself, instead of an outlet pass,’’ Rondo said. “They did a good job of jamming outlets and getting steals. But for the most part our bigs did a great job handling the ball. When I rebound, it starts with me and I’m able to push the ball on the break.

“I think they missed the same shots they missed in Game 1 but [the Lakers] were the aggressive ones and they got those rebounds and loose balls. We got them [last] night and we were able to get down on the break and attack.’’