Thibodeau to be their new coach 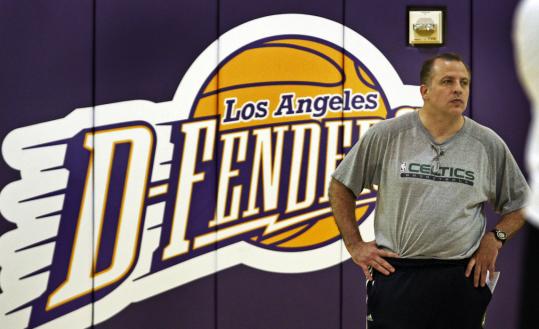 Word had spread throughout the morning that after spending 21 seasons in the NBA, Thibodeau had accepted a job as head coach of the Chicago Bulls. His plate was still full with the Celtics trying to respond after dropping Game 1 of the NBA Finals to the Lakers, but Thibodeau shook the well-wisher’s hand and said, “Thank you.’’

The Chicago Tribune is reporting that Thibodeau agreed to a three-year deal with the Bulls, though no official announcement will be made until the Finals are over. Celtics management would not confirm the reports, but all signs pointed to Thibodeau becoming Chicago’s 18th head coach.

Thibodeau spent three years as the top assistant to Celtics coach Doc Rivers, serving as the architect of a defense that has been the team’s signature, highlighted by the title run of 2007-08, the year the Celtics held teams to 90 points a night and 41.0 percent shooting.

“He deserves the job,’’ said Rivers, one of Thibodeau’s largest supporters as jobs have cropped up over recent seasons. “I think he’s the best candidate out there. I’ve said that for three years now.’’

Thibodeau’s identity with the Celtics has largely been defined by his work ethic, with endless tape study and 14-hour days being the norm as he immersed himself in the role of defensive specialist. Celtics captain Paul Pierce said the role was one that Rivers allowed Thibodeau to grow into.

“I think Doc does a good job of expanding their roles,’’ Pierce said. “Before Doc got here, you didn’t see too much of that with the past coaches. But especially Tibs, everybody knows his role with the ball club is mainly with the defense. He can do anything, but that’s just his role. I think his influence defensively on this team has been major in getting us to the point we’re at now.’’

“He’s a great defensive coach for us now,’’ said Rajon Rondo. “He’s very vocal. He knows how to talk to the players and he has a great relationship with his players.’’

Thibodeau’s only head coaching experience came with one year at his alma mater, Salem State (1984). Since entering the league in 1989 as an assistant with the expansion Timberwolves, Thibodeau has helped teams finish among the league’s top 10 in team defense 15 times, including three times with the Celtics.

After spending time as an advance scout for the Sonics in 1991, he was on the bench with the Spurs, Knicks, and Rockets. He has coached in more than 150 playoff games and been to three Finals — two with the Celtics and one with the Knicks in 1999.

“Who he has been as an assistant changes as a head coach,’’ Ray Allen said. “We always know, all of us, we’re only as good as the people that we’re around.’’

Once the regular season ended and the coaching carousel started to spin, Thibodeau’s candidacy immediately heated up. He interviewed with the Hornets, Nets, Bulls, and Clippers and got an offer from the Hornets, but decided on Chicago, winner of six championships, though but none since 1998, Michael Jordan’s last year with the team.

In Chicago, Thibodeau will inherit a team with young talent in Derrick Rose, the No. 1 pick in 2008, and Joakim Noah, one of the league’s most improved players this season. With money to spend in free agency this summer, the Bulls are also one of the suitors in the LeBron James sweepstakes.

A connection between James and Thibodeau is agent Leon Rose, whose Creative Artists Agency represents them both.

Murmurs about Thibodeau’s status have floated around throughout the playoffs, even as the Celtics set their sights on the Lakers, whom they trail, one game to none, going into Game 2 tonight. But Rivers said he didn’t see it as a distraction.

Rivers also said any decisions his assistants make wouldn’t play into his decision about whether to return.

“Tibs and I are very close,’’ Rivers said. “That won’t have an impact. I want all my coaches to get jobs. They work so hard. Kevin Easton and Armond [Hill], those guys are gems. They really are. Some day they probably will.

Monique Walker and Gary Washburn of the Globe staff contributed to this report.