With more titles than Auerbach, Jackson can be considered the game’s best coach, and with his contract up after this season, the Lakers mentor may be approaching his 11th hour 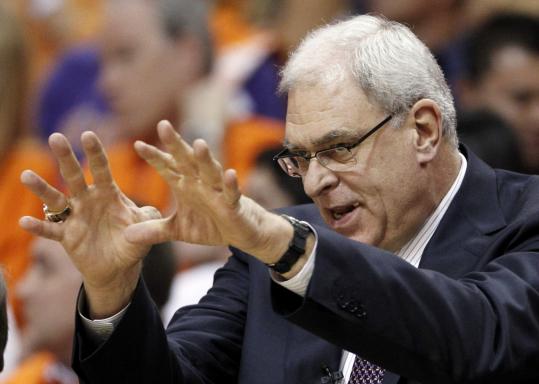 The formidable Phil Jackson could put championship jewelry on every digit if he so chose. (Chris Carlson/Associated Press)
By Shira Springer Globe Staff / June 3, 2010

EL SEGUNDO, Calif. — The best coach ever? It was only a matter of time before Phil Jackson found himself addressing the question. After all, the NBA Finals are when players and coaches make and polish legacies. Does being viewed as the best coach matter to the Zen Master, the man who relishes summertimes in Montana, the former player who once penned a book titled “Maverick’’ about his counterculture adventures?

“Every coach has his own goals, and that’s to coach the team the best that he possibly could,’’ said the Lakers mentor, wearing his 2009 NBA championship ring. “One of my general managers, Jerry Krause, told me, ‘Some guys do a great job with a 20-win team and some guys do an average job with a 50-win team.’

“That was to take me down a step or two so I wasn’t too full of myself. But that’s very true. So, when you have a team that’s in this position and you’re projected to win, this is the pressure time for trying to get the production out of your team that’s the best.’’

“Phil’s the best closer there’s ever been in all sports,’’ said Lakers assistant Frank Hamblen. “He’s better than the guy the Yankees have, Mariano Rivera.’’

Jackson’s true gift is his ability to calmly negotiate high-pressure, high-drama situations and consistently produce wins. He exudes a casual confidence all the way down to the flip-flops he wears at practice. And that relaxed demeanor, that famed Zen Master persona, effectively persuades his players to listen and learn.

When asked for the most valuable lesson learned from Jackson, Lamar Odom simply said, “Poise.’’

Defending an NBA championship, dealing with Ron Artest on a daily basis, and dating the owner’s daughter can test the calm of even the most meditative coach. Still, with an unconventional mix of humor, motivational ploys, and Eastern philosophy, Jackson juggles the demands of being the best in his profession. Even if being “the best’’ was never a title that mattered to him. Too much else occupies his time and his mind.

In a series of Twitter messages sent out early last month, Artest criticized Jackson. The messages complained about Jackson talking to reporters about his offensive struggles. The first statement read, “Hopefully he talks to me before the media.’’ The second asked everyone to “pray [Jackson] can somehow close his yapper.’’ Remember? No? Maybe not because of the skewed views of the source. Or maybe not because of how Jackson handled the situation.

Jackson noted how up-front he had been with Artest about his 3-point shooting, how he had seen a struggling Toni Kukoc turn around his outside shooting in the Finals, and how he expected Artest to do the same with better shot selection. There it was — the truth, encouragement, and instruction — neatly wrapped up in a single answer.

What could’ve spiraled into controversy elsewhere became a non-issue because, on and off the court, Jackson deftly, artfully handles players.

“He has an ability to know when to step in and say certain things or ask a guy to do certain things or be more demanding of a guy at a certain time,’’ said point guard Derek Fisher. “That’s combined with his ability to turn his back and just let the guy be who he is or make mistakes or be in the wrong spot offensively, allowing the guy to figure some things out on his own and not have to have his hand held.’’

From $50 rewards for taking charges to book recommendations to quotations to a slow trigger with timeouts when the team struggles, Jackson relies on an impressive catalog of motivational and teaching tools.

“He puts a lot of thought into how to motivate these guys, to keep their enthusiasm at a high pitch,’’ said Hamblen. “He does a lot of his work off the floor in talking to guys, in thinking about, ‘How can I motivate these guys and what’s the next step in the process?’

Jackson can elevate the coach’s press conference into a carefully crafted show. His media gatherings often become humor-filled forums for strategically complaining about the other team or referees or NBA scheduling, for revisiting NBA history, for making random observations about life and literature. Leading up tonight’s Game 1, all of the above were on the set list.

The entertainment started when Jackson accused the Celtics, specifically Kevin Garnett, of having “a smackdown mentality.’’ Garnett found himself in good company with Oklahoma City’s Kevin Durant and Phoenix’s Steve Nash, the two other targets of Jackson’s verbal playoff jabs.

Jackson accused Nash of carrying the ball. The veteran point guard laughed at the comment, then mentioned how “the best coach in the league, Gregg Popovich, didn’t have a problem with it.’’

When not devising ways to motivate his players or disturb the psyche of opponents, Jackson enjoys a good book. For the record, he just delved into “The Girl Who Kicked the Hornets’ Nest’’ by Stieg Larsson. It’s the third book in a trilogy about a journalist and a brilliant computer hacker who fight against corporate greed and government corruption.

The novel will help him pass the time on game days during the Finals. But the bigger question is how and where Jackson will pass the time after the Finals when his current contract expires.

Throughout the playoffs, speculation about where Jackson will coach next season has generated national headlines. Some early scenarios had Jackson joining LeBron James in either Chicago or Cleveland. Jackson is viewed as the coach who can lure James to a team, who can get the NBA’s top free agent that elusive championship ring, who can do for the reigning MVP what he did for Michael Jordan.

Last week, Jackson said he has “no desire at all’’ to return to the Windy City and coach the Bulls. He would, however, “like to have a vodka’’ with the new Russian owner of the New Jersey Nets, Mikhail Prokhorov.

Even hypothetically, a meeting of the minds between Zen Master Jackson and Russian billionaire Prokhorov is intriguing. But in reality, the overwhelming odds are Jackson will remain with the Lakers or retire. He has said there is a “90 percent’’ chance he will either stay put or leave coaching.

Contract gamesmanship may be the reason behind Jackson’s vodka summit comments and other remarks concerning his future. Reports indicated Lakers owner Jerry Buss wants Jackson, who will earn $12 million this season, to take a pay cut. The best bargaining chip? Adding an 11th ring to his collection.