For this Big Three, two is a huge number 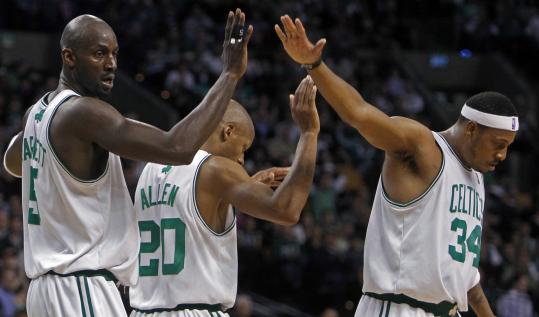 Paul Pierce, Kevin Garnett, and Ray Allen have won one championship apiece, and don’t think they aren’t acutely aware of that number.

One is nice, but getting multiple rings is necessary if you’re going to secure your desired spot in this team’s history.

“I ran into Michael Jordan after we won last time,’’ Allen said, “and he said that the first time you win is luck and after that you earn it. I don’t believe our winning it two years ago was luck, but he’s won six times, so I couldn’t argue with him.

“But I do think winning multiple times is important, because it proves it wasn’t a fluke, and it definitely shows your commitment, and your team’s commitment.’’

When the original Big Three won their first championship on May 14, 1981, Robert Parish was 27, Larry Bird was 24, and Kevin McHale was 23. When they won their third and final title on June 8, 1986, McHale was 28, Bird was 29, and Parish was 32. Larry and Kevin were done winning championships before they were 30, which is when the new Big Three were just getting started.

When the second Big Three won their championship on June 17, 2008, Allen was 32, Garnett was 32, and Pierce was 30. Add two to those ages, and that’s a big difference. Are these guys actually overachieving? Are they really supposed to be here? Would winning a second championship at ages 34, 34, and 32 be more impressive than anything the original Big Three ever did, especially if both championships came at the expense of the Lakers? It’s not easy to answer, but it’s a fascinating question to pose.

The two years since that first Allen-Pierce-Garnett championship have taken a toll. Allen has had moments of classic brilliance, but he’s also had some very quiet games. Pierce has had some magnificent playoff games, but he also had two full series worth of subpar performances. Garnett has not really had any classic Garnett games. What he’s done is have some games that were better than anything he did during the regular season, but not many of them. Everyone has come to expect less from him.

Garnett has seldom been willing to take charge offensively, anyway. Far too often, he is stubbornly, and maddeningly, deferential. It’s hard to come up with the name of any comparably great offensive player who so often passes up a good shot in order to give a teammate a lesser one. But his greatest value to the Celtics has been on the defensive end, and here he has been able to keep up his end of the bargain reasonably well.

What is undeniable now is how much they need each other. One major reason the Celtics are playing in their 21st NBA Finals, and second in this second Big Three era, is the way they have played glorious team basketball at both ends of the court. When they fall off the track by ceasing to move the basketball and by not working hard to fulfill their defensive assignments, they can be beaten. Witness Cleveland 124, Boston 95, and that ugly Game 4 against Orlando (which, granted, they almost stole despite themselves).

But when they stick to the nightly game plan, they are very difficult to beat. In the first three series, no one would deny for an instant that the most imposing player on the floor was an opponent. But Dwyane Wade, LeBron James, and Dwight Howard will all be watching the Finals on TV because the Boston Celtics had the better T-E-A-M. Now comes the ultimate test. Kobe Bryant is on a Jordanesque roll.

So, yes, the Celtics know what’s ahead of them.

“Sure, I want this as much as I did two years ago,’’ said Garnett. “I’m hungry. I want this. We want this. We didn’t get here by luck, or the roll of the dice. There are very, very, very few players who have had a chance like this. The fire’s still burning.’’

Of the Big Three, none have plugged themselves into the history of the franchise more than Pierce, an Inglewood native who still finds it hard to digest that he is a Boston Celtic and intends to retire as one.

“When I was 12 years old,’’ Pierce said, “I had basketball dreams. Who thinks things like this are going to happen? When you guys were 12, did you think you were going to be a top sportswriter or broadcaster? You never know.

He knows the math.

“A lot of guys have won one,’’ he said. “But all the great Celtics have won two, at least. I want to be mentioned in that group.’’

We can only watch. These guys can make it happen.