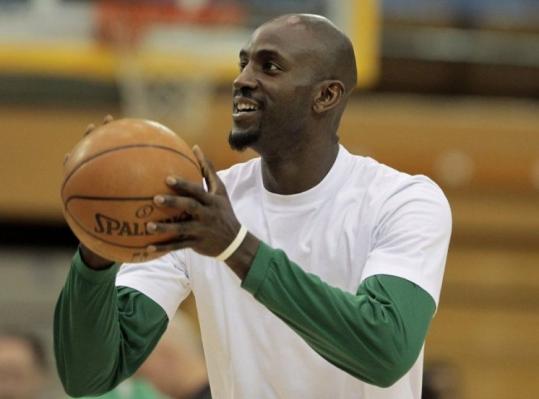 LOS ANGELES — Lakers coach Phil Jackson served up some bait for Kevin Garnett and the Celtics. Garnett did his best not to bite.

Describing the Celtics’ brand of defense — particularly Garnett’s battle with Dwight Howard in the Eastern Conference finals — Jackson said Boston has a “a smackdown mentality’’ and that Garnett “was smacking Howard’s arm and finally he was called for an offensive foul.’’

When word of Jackson’s comments got to Garnett yesterday before practice at Pauley Pavilion, he initially offered a “no comment,’’ but when pressed, he said, “I think nothing of it. It’s just Phil playing mind games. It’s all good.’’

Celtics coach Doc Rivers, for one, was flattered.

“We just thank Phil for the compliment,’’ Rivers said. “That’s very nice of him to say.’’

Rivers was taking into account Jackson’s track record for playing mind tricks with marquee players. Before the start of the Western Conference finals, Jackson took small digs at Suns point guard Steve Nash. Before the first-round series against Oklahoma City, Jackson essentially reiterated what Garnett said about Kevin Durant getting superstar calls despite only being a third-year player. There was also the time in 2006 when Jackson called out Dwyane Wade for traveling on his spin move.

“I think he picks the best player on the other team or who he thinks is key, so Kevin should put that right up there with his MVP trophy,’’ Rivers said. “I think Kevin should be excited about that.’’

As far as how he characterizes the Celtics’ defense, which has been practically impenetrable in the postseason, Garnett said, “I think part of defense is being physical. Definitely being firm. You’re playing physical guys like Shaq [O’Neal] and Dwight Howard, [Andrew] Bynum, you’ve got to hold your ground. You’ve got to find some way to absorb it the best way you see fit. Our style is just firm, consistent, and there’s a lot of communication.’’

If that means they’re a smackdown team, Rivers said, so be it.

“Whatever got us here,’’ Rivers said. “We’re not hiding from who we are, and we’re going to be that. So that’s never going to change. We said it from Day 1. We are who we are. If you like us, cheer for us. If you don’t, complain. But we’re not going to change.’’

Daniels is out for now
Still suffering from the effects of the concussion he sustained in Game 5 against Orlando, Marquis Daniels will miss the Finals opener. His minutes have been few and far between in the postseason, but the matchup with the Lakers is one in which his defense would be valuable.

“It’s a tough one,’’ Rivers said. “It’s funny, I talked to him before Game 2 or 3 of the Orlando series and we were assuming it was going to be the Lakers and I said, ‘You’re going to be big for us defensively in that series and we need you to get ready.’ It was such a freak accident.’’

The Celtics signed Daniels last summer for his defense and his ability to play anywhere from point guard to small forward. But a thumb injury cost him 28 regular-season games and he was never able to get back on track. He fell out of Rivers’s rotation late in the season but played spot minutes in the Cleveland series, guarding LeBron James.

“Every decision we make is for the playoffs, as far as veterans,’’ Rivers said. “When we go after players, it’s about helping us in the playoffs, and I thought Marquis would be a great addition for us. It’s just not gone his way so far. I’m just hoping he could get back, because we would use him in this series.’’

On deaf ears
With Kendrick Perkins one technical foul away from a suspension — getting five of his six postseason techs on double technical fouls — Rivers has been lobbying to anyone who will listen about changing the playoff penalty for double technicals. “I’ve tried,’’ Rivers said. “Obviously, there’s been no talk back. After the third or fourth time, it’s just not going to happen.’’ . . . The Celtics flew to Los Angeles Monday, a day earlier than originally planned. A late departure plus a refueling in Phoenix stretched the flight out to eight hours. “Middle of the flight, we knew it was a good decision,’’ Rivers said. “Originally, we were going to try to fly out [yesterday] morning and try to practice. That would not have worked out after an eight-hour flight. It was a good move. It was luck, but it was a good move.’’ . . . Asked about Kobe Bryant giving Suns coach Alvin Gentry a tap on the behind after nailing the Game 6 dagger, Rivers said, “It happened so quick. It’s not like you can react to it. If Gentry’s reflexes were a little quicker, that overhand right would have been beautiful.’’