Hornets zeroing in on Thibodeau 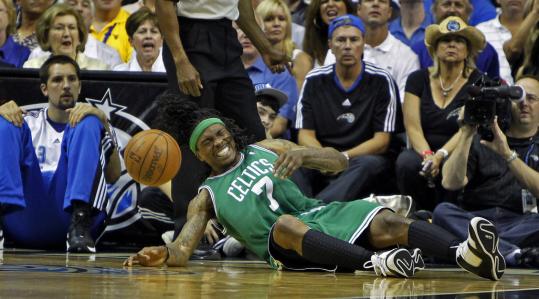 Marquis Daniels was dazed and in pain after colliding with Magic center Marcin Gortat. (Jim Davis/Globe Staff)
By Julian Benbow Globe Staff / May 27, 2010

ORLANDO, Fla. — Though the New Orleans Hornets have interviewed and are interested in Celtics associate head coach Tom Thibodeau, they have not officially offered him their head coaching job, according to a team source.

The Hornets want to talk with Thibodeau again. And while an offer may be imminent, according to the source, the sides have yet to discuss a contract.

According to the Associated Press, Hornets general manager Jeff Bower has denied offering the job to Thibodeau.

Thibodeau has been at Celtics coach Doc Rivers’s side since 2007, the architect of a defense that has been the team’s signature. Reports urfaced Monday that Thibodeau was the Hornets’ top choice. Yesterday morning, ESPN’s Marc Stein reported that Thibodeau had been offered the job.

Thibodeau’s name has come up as a candidate for several coaching vacancies, including those of the Knicks and Bulls in 2008, and the Nets and Hornets this year.

After making the playoffs for two straight seasons, the Hornets finished 37-45 this year, franchise player Chris Paul hampered much of the way with injuries. Byron Scott, who had coached the team since 2007, was fired after the Hornets started 3-6.

Howard foul flagrant
Dwight Howard’s third-quarter foul on Kevin Garnett in Monday’s Game 4 was upgraded by the league yesterday to a flagrant-1, his second of the series and the postseason. Any player who exceeds three flagrant fouls is suspended for one game.

“That’s their decision,’’ said Magic coach Stan Van Gundy. “He got a rebound and pivoted.’’

“I thought it was flagrant,’’ he said. “Bottom line, whenever you throw elbows above the head, it’s going to be called a flagrant.’’

At the same time, with Kendrick Perkins entering last night sitting on five technical fouls this postseason (two shy of a suspension), Rivers added, “We have our own guys who are pretty close to the number.’’

Perkins was ejected in the second quarter of Game 5, picking up a pair of technicals, his sixth and seventh of the playoffs. Unless the NBA rescinds one of the technicals, he will face a mandatory one-game ban.

Perkins didn’t have any of his 15 regular-season technicals rescinded, but Rasheed Wallace had three rescinded, finishing with 14. The count resets for the playoffs.

“I actually don’t like the rule,’’ said Rivers before the game, “because I think the longer you’re in the playoffs the more likely it’s going to affect your team, and the fans want to see the best players on the floor.’’

Not feeling well
Magic forward Rashard Lewis has struggled for most of the series, and yesterday at shootaround he told reporters a stomach virus was part of the reason. He said that although he is improving, he isn’t 100 percent.

“Overall, it affects you,’’ Lewis said told the Associated Press. “I haven’t been at full strength. I’ve been feeling weak. My legs have been getting weak. I find myself getting tired very fast in the game early in the first quarter. So, you know, when you can’t hold food down you have no energy in your body to go out there and perform.’’

Lewis was practically invisible in the first three games, shooting a combined 6 for 24 from the floor. He was better in Game 4, producing 13 points and five rebounds.

Arc of triumph
Each of the Magic’s 13 3-pointers was like a bolt of lightning.

The same team that went 17 for 58 from distance in the first three games of the series, shot 52 percent from behind the arc in Game 5.

“We can’t beat this team doing that,’’ Garnett said. “We’ve got to take their threes away. I thought for the most part we’ve been doing a decent job of if, but as of late Jameer’s been real aggressive.’’

Nelson hit four threes, finishing with 24 points, but six Magic connected from 3-point range, including Matt Barnes, who drained one at the start of the third quarter to push Orlando’s to 60-51.

Whenever the Celtics looked to be rallying, the Magic had a three in their back pocket as the remedy.

“They’re a great team when they get the lead because then those threes are easy,’’ Rivers said. “I never thought we supplied any pressure to them tonight. I thought we made runs, but no real pressure. For us it’s very difficult to score when you’re taking the ball out of bounds every time. It obviously hurts [Rajon] Rondo the most.’’

A little fuzzy
Still dazed after suffering a concussion during a collision with Magic backup center Marcin Gortat, Marquis Daniels didn’t speak with reporters after the game. He supposedly couldn’t remember anything before a spin move ended with him hitting his head against Gortat’s chest. Daniels had only played six minutes in the series prior to last night . . . Paul Pierce took a spill in the third quarter, tumbling in the paint as his leg bent awkwardly, with Howard in the vicinity. “I don’t know,’’ Pierce said. “You get caught up in the middle of the paint and you just go down to the floor. Obviously, they didn’t call it.’’