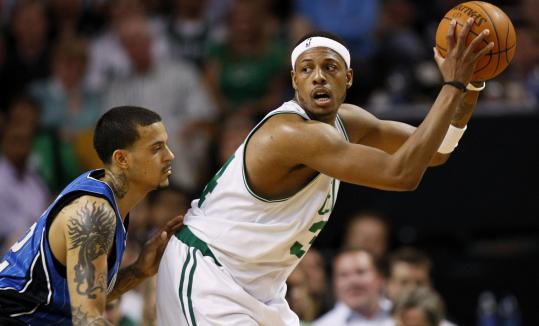 Orlando’s Matt Barnes tried to keep Paul Pierce in check, but the Celtics star was looking for his offense in the first half of Game 4 at TD Garden. (Yoon S. Byun/Globe Staff)
By Bob Ryan Globe Columnist / May 25, 2010

As a general rule, aren’t we all a bit wary of embracing the idea that if the nebulous “They’’ say something, then, by golly, it must be true?

But sometimes They really do have a handle on things.

For decades now, They have told us that the regular season in American professional sport is one thing and the playoffs are another. They have told us baseball has a dynamic known as the “Short Series,’’ in which the starting pitching depth that serves a team so well over a 162-game regular season is diminished by the reality that all a team needs to achieve postseason success are three decent starters, and, if you get right down to it, you might even survive with two (Go ahead, name the third starter for the Minnesota Twins in 1987 and 1991). They have told us a hot goalie can erase every sin known to mankind, save the one known as Original. And they have told us that regular-season records in the NBA are highly circumstantial.

The NFL? Not so much. There are no three games in three nights. You play your 45 people, every week, regardless. Some coaches might be — might be — somewhat more conservative in their offensive approach in the playoffs. Overall, football is a violent game played in a hostile manner from the first day till the last. Half-stepping in that game is a sure way to wind up in a hospital bed.

But no sport among our Big Four offers such a vivid general contrast between what you often see during the regular season and what you see on a nightly basis during the postseason than the National Basketball Association. Of course, we are being smitten by what the Celtics have done. It really is as if January, February, and March never happened. But it’s not just them. Other teams have adopted a different personality than the one on display during the Big 82, some for the better, and some, to the chagrin of their coaches, very much for the worse.

Now it sounds strange to suggest that winning too many regular-season games is ultimately detrimental to a coach’s job security, but that’s a conclusion the Two Mikes — Brown and Woodson — might share. These fine gentlemen coached teams with a combined regular-season record of 114-50. Each won a playoff series. Yet the latter was given the old pink slip May 14 and the former followed him into the ranks of future TV commentators yesterday. Are there better coaches available than either of these two? Absolutely. Are there far worse still employed? Hail, yes.

Suppose Mike Brown’s Cleveland Cavaliers had won, say, 56 games, rather than 61. That still would have made it a fine season by the standards of the franchise, and it might have tamped down expectations for the postseason. Now I admit that winning 53 did not raise the bar too high for Woodson in Atlanta. What did him in was the idea that his team should have won a lot more games, and it was way too good on paper to be swept in a playoff series by anybody. No one could understand why a team as talented as his only went 19-22 on the road, at least until they were exposed in the playoffs as a front-running team with the collective fighting heart of an amoeba, and one that, furthermore, lacked the requisite inside toughness needed to be a serious playoff contender. The Hawks weren’t the first finesse team to be unmasked as pretenders during the playoffs. They were only the latest.

Nicely playing off league MVP LeBron James, Cleveland was a team out to prove something this season. A 61-21 record is pretty good. “They’’ all said it was obviously LeBron and Cleveland’s year, and so it was easy to feel there was some sense of entitlement. There was trouble right from the start of the playoffs, however, as Brown later acknowledged. True, the Cavs defeated Chicago in five, but that was without playing particularly well. That level of two-way competence was not going to cut it against Boston, and it didn’t. Cleveland had (an injured) LeBron, but Boston had the next four best players in the series, and the Celtics dominated the final three games in what was a rather easy six-game conquest.

Fully assembled and sufficiently healthy, the Celtics are turning out to be an ideal playoff team, neatly balanced between four 30-somethings with enough combined basketball wisdom to stock a Library of Congress wing and four 20-somethings who have both tremendous talent and the willingness to follow orders. It is an extraordinarily rare circumstance to have five starters return intact the year following an NBA championship, let alone two years later. Then consider that all eight players in the Celtics’ standard rotation have championship rings. Assuming they didn’t all show up in wheelchairs, how could they not be a good playoff team? (Isn’t hindsight a wonderful visual aid?)

During the second half of the regular season, you name it, and it went wrong. It was always about mañana, and now mañana is here.

It’s this simple: The Two Mikes did not have great playoff teams. Doc Rivers does. He has been on the other side; he knows the difference. The year before he got his ring, Doc coached a team that lost 18 straight games. “They’’ all agreed that Danny Ainge couldn’t GM and Doc couldn’t coach. Remember?

But give “Them’’ credit. “They’’ were right about the nature of the playoffs.

By the way, the answers to the Twins questions were Les Straker and Kevin Tapani, respectively. They have rings. Bob Feller and Juan Marichal don’t. We live in a very odd world.