In a flash, Superman makes a quick change 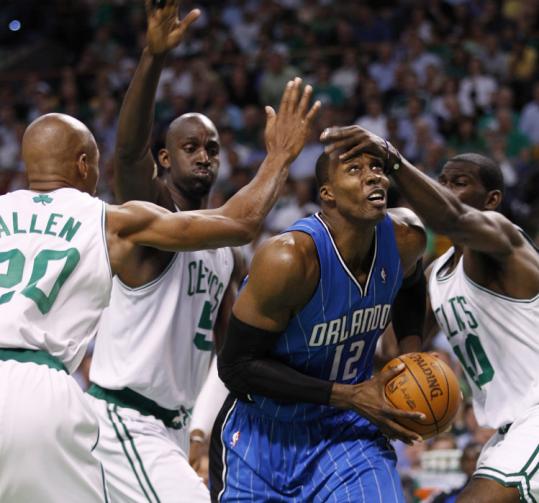 He was Superman with Kryptonite around his wrist. He was the two-time NBA Defensive Player of the Year who had become very defensive about how he had performed lately. He was a superstar who became the first player in NBA history to lead the league in blocks and rebounds in the same season twice.

For Magic center Dwight Howard, the Eastern Conference finals had been a monster letdown, the Man of Steel’s power no match for the Men in Green, as he had yet to lead his team to a win against the Celtics.

Then, just like that, last night in Game 4 Howard scored a game-high-tying 32 points, pulled down a game-high 16 rebounds, and blocked 4 shots in leading the Magic to 96-92 overtime win that sent the series back to Orlando.

Tomorrow night’s Game 5 is one few people outside the Magic inner circle thought would take place.

“Dwight’s will was very strong tonight,’’ said Magic coach Stan Van Gundy, who laid out a challenge for his team before the game.

The message the Magic heard before the game, throughout the game, and even after the game was clear and consistent. “Make the effort, defend harder, and rebound,’’ Van Gundy said.

What he didn’t have to say was that if the Magic did those things, good things would happen for the defending conference champions.

And, led by Howard, that is what happened — finally — for the Magic, who hustled, defended, and rebounded and eventually prevailed in a game that was more typical of what Orlando can do when it is focused.

The pessimism before the game seemed justified after an embarrassing 94-71 loss in Game 3 Saturday night in which the Celtics took an overwhelming series lead, playing like a veteran team that was getting better with each outing.

Before last night’s game, Howard said, “We just have to continue to play. Things happen for a reason. We know the situation. We have to stay together. We can’t let this situation tear us apart. So there’s no need for separation.’’

Howard, who generally had struggled in the series except for a 30-point, 8-rebound effort in Game 2, asked Van Gundy for one consideration before the game — more rest earlier in the contest than usual.

“He told me he was going to go all-out early,’’ said Van Gundy, who did give his center some rest in the first half but hardly any in the second.

“Give him his due,’’’ said Celtics coach Doc Rivers, who watched Howard throw in slam dunks on passes from point guard Jameer Nelson, as well as put in follows and make offensive moves against Kendrick Perkins and Kevin Garnett, who had difficulty containing him all night.

Before the game, Howard said his mission was clear.

“We worked so hard in the offseason and then last season and the summer and during the season to get where we are,’’ he said. “We know what we have to do.’’

And the Magic did just that.