Cavaliers are at a complete loss 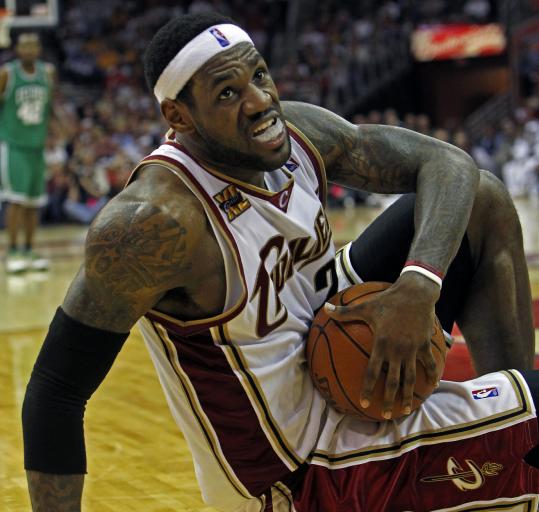 LeBron James and the Cavaliers were hit hard by the Celtics; James’s next move could decimate the franchise. (Jim Davis/Globe Staff)
By Gary Washburn Globe Staff / May 12, 2010

CLEVELAND — Silence and confusion were the coherent themes in the Cavaliers locker room following their 120-88 Game 5 loss to the Celtics. A team so primed for success, so ready for a title run and so geared to cruise to the Eastern Conference finals is now one game from elimination.

No one in the Cleveland locker room at Quicken Loans Arena expected to approach abject failure, especially so soon. The No. 1-seeded Cavaliers were supposed to be done with Boston and preparing for a rematch with Orlando. But getting to the Magic will take consecutive wins. After last night’s performance, it seems the Cavaliers aren’t capable of such feats.

The 20,562 in attendance may have witnessed (now that’s a nasty word in Cleveland) LeBron James’s final home game. If the Cavaliers fall short, the team could be completely dismantled, starting with James, who will exercise his opt-out clause and become an unrestricted free agent.

James refuses to acknowledge that his right elbow is hindering his performance, but it’s difficult to believe he’s completely healthy. He is 17 for 47 from the field in the three losses to Boston and last night there were times he wanted nothing to do with scoring or spearheading a comeback.

The repercussions of losing this series could be catastrophic to the city of Cleveland and Cavaliers basketball. Although Quicken Loans won’t be confused with Richfield Coliseum of the early 1980s, the Cavaliers could be LeBron-less and without an identity next season.

The Q faithful have already turned on Mo Williams, who has proven in this series he is deep among the second-class point guards in the NBA. A stretch of the third quarter proved such. Rajon Rondo went right at Williams and scored 8 of Boston’s 11 points to extend its lead to 67-52.

A group of fans from the upper deck booed Williams vigorously, causing a Cleveland police officer to comment, “You don’t boo your own guy like that, just because he’s not playing his best.’’

For decades, the Cavaliers witnessed (there’s that word again) basketball at its worst. It was a laughingstock franchise for most of the 1980s until Lenny Wilkens took over and again in the early 2000s until the lottery balls handed the Cavaliers a local phenom named LeBron James.

Since James’s arrival, general manager Danny Ferry has worked overtime trying to assemble a capable team around him. And this bunch was expected to beat on these aging, fading Celtics.

The Celtics’ domination in three of the five games has the Cavaliers speechless. Coach Mike Brown is unsure how to motivate his team. He did not think he had to at this point. James appears resigned to the fact his long-awaited title may have to occur in another city surrounded by better players, and the rest of the Cavaliers are repeating sports clichés, hoping one actually sounds believable.

“We’re just not doing the things we need to do; we’re not making it tough for them,’’ forward Antawn Jamison said. “Everything seems to work [for them]. They are keeping us on our heels and it’s all about pride and finding a way to get it done. You can try to make an excuse for anything right now. It seems like we were thinking too much.

“We knew what was at stake. We knew the importance of this game. It’s just disappointing to come out and give that type of performance. How do things like that occur? It happens. We’re upset because we didn’t imagine it happening this way.’’

Brown appears out of ideas. After Game 2, he stomped onto the podium following the 104-86 loss, uttered several expletives and his team looked inspired in Game 3, obliterating the Celtics. Yet, that feeling whizzed past almost immediately afterward, and save for a couple of decent starts the past two games, the Cavaliers have been lifeless and Brown is taking most of the blame.

Doc Rivers is baffling him with his coaching adjustments and the coaching competition is so lopsided Brown’s reputation has been damaged. He has no idea what to do with Rondo. After playing Zydrunas Ilgauskas for five minutes in the series, Brown inserted him as if the big man was going to play Willis Reed in Game 7 of the 1970 Finals. It sparked the crowd briefly, but did nothing to camouflage the reality that Brown is winging it.

His best player is ailing; the rest of the team is shellshocked and the city is again shaking its head, ready for another Earnest Byner fumble at the goal line. The fate of Cleveland basketball could be at stake the next two games and the Cavaliers are befuddled about how to regain their confidence.

“Game 6, we’ll learn a lot about ourselves,’’ Brown said. “We can’t dismiss this game. You’ve got to give Boston credit. They’re a good team.

“I don’t know how much I talked about energy but we have to focus better so we can play better than we did tonight and we will. Game 6 is the next game and one we’re looking forward to. We have to win.’’