Let’s officially put a moratorium on discussion of The Elbow. It will not be a factor in this series. Cavaliers star LeBron James and his much discussed and dissected joint are a nonstarter and a nonstory from now on. Agreed? There is no way that after the hurtin’ James put on the Celtics last night he or Cleveland can point to The Elbow as a caveat for the Cavaliers in this series.

It would be nothing less than the height of hoops hypocrisy to do so, especially after the LeBrons embarrassed the Celtics, 124-95, in Game 3 of this Eastern Conference semifinals series to take a 2-1 lead. No one had ever handed the Celtics a worse home playoff loss, not Michael Jordan, not Julius Erving, not Wilt Chamberlain. None of them had hip-hop and R&B royalty on hand to watch such a rout either — James had pal Jay-Z and Beyonce cheering him on from the first row, with the rapper sporting camouflage shorts.

Jay-Z has a song called “Takeover,’’ and that’s exactly what James did.

Nothing could camouflage the fact that ’Bron wasn’t hampered by the bad ’bow. Forget another MRI, all you had to do was watch the first quarter and look at the final stat sheet. It was a typical transcendent performance from King James, who turned the TD Garden into his court with 38 points (on 14 of 22 from the field), 8 rebounds and 7 assists in 39 minutes of work.

“He was great. We knew coming into the game. We told our guys that we knew that he was going to grab the ball and he’s going to attack all game, especially early to get his guys involved. He did it, but I didn’t think we gave him any resistance. I mean he was playing H-O-R-S-E.’’

Actually, he was playing a different five-letter shooting game, E-L-B-O-W, and the Celtics couldn’t match him or the Cavs. Boston never led in this game.

After a passive performance during the Celtics’ 104-86 victory Monday night (doesn’t that feel like a different playoff series by now?) during which James only took 15 shots, some questioned whether LeBron’s boo-boo was preventing him from taking over. The injury seemed to be affecting him as much mentally as physically. Not anymore.

He came out from the opening tip determined to apply some elbow grease to the Celtics and all it took was a quarter for him to make it clear the Celtics weren’t winning this game.

“Aggression was my mind-set,’’ said James. “It was my mind-set to come out really aggressive and just dictate tempo from the start, and I was able to do that. I think rest helped me.’’

James missed his first shot of the game, a jumper, and then hit six in a row. Not even a flagrant foul by Kendrick Perkins on a fast break could slow him down. He calmly sank the free throws and then canned a 22-footer. Of LeBron’s six-pack of baskets, all but one was a jump shot, an indication that The Elbow was having about as much effect on James’s jumper as the debt crisis in Greece is having on his wallet.

Not that he shied away from going to the rim. There was the pretty finger-roll-plus-1 to give the Cavs a 17-point lead in the first quarter and then there was the contest-ready slam dunk he powered home to give Cleveland a 34-15 advantage.

LeBron launched 10 shots in the opening quarter, hitting eight, and had 21 points to show for it, just 3 fewer than he had total in Game 2.

James took it easy in the second quarter, scoring just 7 points, but he had a big block of a Big Baby Davis shot and at the half he had 28 points and his team led by 22.

“He’s our leader,’’ said Cavaliers forward Antawn Jamison. “He was really focused coming into today and shootaround. When he goes, we go. He set the tone early on both ends.’’

For all the talk about James’s incredible offensive performance, he has shut down Paul Pierce on the defensive end in this series. Pierce had 11 points last night and is averaging 12.7 in the series on, yuck, 31 percent shooting.

“We’re not doing anything special on Paul,’’ said Cleveland coach Mike Brown. “LeBron has had that assignment for most of the series.’’

If Brown was concerned about James’s elbow, maybe we should start calling it the “L-bow’’, since James didn’t come out until there was 5:41 left in the fourth quarter and his team was trouncing the Celtics by 30 (113-83).

James said his staying in was dictated by the flow of the game and not the two-time defending MVP sending a message to the former champs.

Perhaps, but one communique the King delivered needed no words. He is fine.

So, let’s stop with the knee-jerk reactions to The Elbow.

“I think it was much bigger than what it really was,’’ said James. “That’s what happens sometimes on the whole media circuit. But [the talk] didn’t bother me at all. I wasn’t tired of hearing about it. I didn’t focus in on it that much.’’ 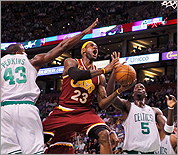