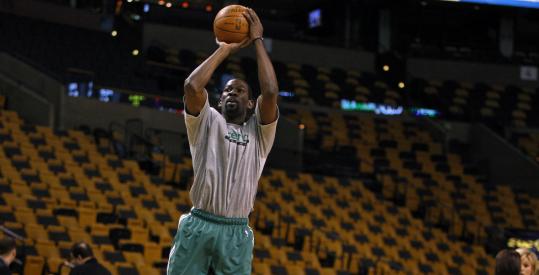 The Celtics got the accomplished Michael Finley for his jump shot, and for his strong leadership. (File/Jim Davis/Globe Staff)
By Bob Ryan Globe Columnist / April 25, 2010

MIAMI — Athletes have a vague sense that they can touch unknown lives, but every once in a while it is brought home to them in graphic fashion.

The young lady in question is Finley Elliott, age 2. She lives in Watauga, Texas, a town in the Dallas-Fort Worth Metroplex, and she is a special, brave little girl who was born with a rare, tough-to-pronounce kidney disease that affects somewhere between 300 and 600 children. Finley Elliott has complete kidney failure and, simply put, she needs a transplant.

Her family and friends are humble people who don’t feel connected to the big time. A family friend named Norma Anderson reached out this week with a modest request: Would it be at all possible to get a Michael Finley autograph? They are planning a fund-raiser May 15 in the form of a dart tournament that would include an auction.

Celtics public relations chief Jeff Twiss got on the case, and the folks in Watauga now have a nice autographed photo of Finley Elliott’s namesake, Michael Finley.

“I was a big Dallas Mavericks fan,’’ explains her father, Maurice “Mo’’ Elliott. “And Michael Finley was my favorite player. For the longest time, he carried them. When my wife got pregnant, we ran through a lot of names, and then I threw Finley out there, thinking that would be a nice name. My wife said, ‘I like that.’ That’s how it happened. I have to tell you I was surprised she went along with it. We got some teeny Finley jerseys she’s not even big enough to wear yet.’’

If you check the timeline, you’ll note that by the time Finley was born, Michael Finley was playing for the hated Spurs. So what’s up with that?

“Maurice Elliott was a huge Mavericks fan, and his favorite player was Michael Finley,’’ explains Rusty Anderson, a good friend. “When Michael was traded to the Spurs, he became a Spurs fan. Now he is a big Celtics fan.’’

According to the Celtics, Maurice Elliott chose the right guy. Michael Finley is now 37, and he is clearly nearing the end of his career. The reason he is with the Celtics as they pursue an 18th championship has more to do with his character than his well-known jump shot.

His job is to be this year’s Celtics playoff Yoda, a role instituted two years ago by the stately P.J. Brown, and which didn’t quite materialize last year with, no offense, Mikki Moore. But with Finley the Celtics feel they have hit the jackpot.

“He was on Danny Ainge’s radar, not mine,’’ says Doc Rivers, who figures he has enough problems trying to coach without being a player procurement guy, too. “I had no idea this was going to happen. Danny came to me one day and said, ‘Michael Finley is probably going to be released by San Antonio. Would you like to have him?’ That was a no-brainer.

“He’s a guy of high character,’’ Rivers continues. “No matter what he contributes on the floor, he is valuable in our locker room. He just has the knack of saying the true, right thing. People want to listen to him. He’s been great for our younger guys already.’’

Finley knows the deal. He’s here to do whatever he can to help this team reach its goal. He’s certainly not here to agitate for playing time.

After getting 15 minutes a game during his 21 regular-season appearances, he has only played 25 minutes and 19 seconds in the three playoff games, scoring 5 points while handing out two assists.

Mindful of his reputation, however, Rivers had him on the floor during Boston’s last possession Friday night, reasoning that no sane person would leave Michael Finley alone to go double-up on Paul Pierce.

Finley professes to be content with the entire circumstance. After all, he does have a ring himself, having been a key member of the 2007 champion Spurs.

“Yes, I have a ring, but it’s still about winning, not just being out here for the fun of it, so to speak,’’ Finley points out. “Winning the championship, that’s the mind-set of everyone on the team. That hasn’t changed.’’

Coming to the Celtics is pretty much what he expected. “I’ve always been a fan of basketball, and the Celtics are one of the teams I’ve always enjoyed watching,’’ he explains. “I knew they had a bunch of guys who enjoyed playing with each other, but some of these guys are actually better than I thought, which makes it a lot more interesting.’’

“I’ll always be a fan of Michael Finley,’’ he says. “He played a big part in the Dallas-Fort Worth area. He helps people. He did a lot of charity work here. I’m interested not just in what they do on the court. They’ve got to be good people.’’

Sounds as if he, Doc, and Danny are on the same page.