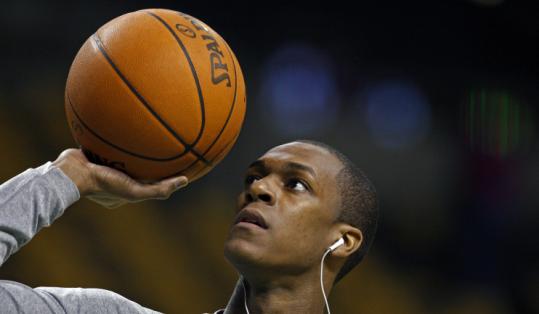 WALTHAM — It’s a fact that perimeter players will simply have to live with. It’s why Bruce Bowen — the Kobe Stopper — was never a Defensive Player of the Year. It’s why Dwyane Wade has never finished higher than third in the voting. It’s why Rajon Rondo was the only guard in the top five this year.

Defensive Player of the Year is a big man’s award, an honor given to shot blockers and rebounders, like this year’s winner, Orlando’s Dwight Howard, who captured his second straight award Tuesday.

Since Michael Jordan was named the league’s top defender in 1998, Ron Artest and Gary Payton are the only other perimeter players to win the award. The rest went to an assortment of shot blockers, from Ben Wallace to Marcus Camby to Kevin Garnett.

“It’s very difficult,’’ Rondo said. “Especially at the point position. Maybe at the wing, but Dwight deserved it this year. He blocked shots, he rebounded the ball very well on the defensive end. He definitely deserved it.’’

Howard averaged 13.2 rebounds and 2.8 blocks a night, becoming the first player to lead the NBA in both categories in the same year twice. His numbers trumped Rondo’s league-high 2.3 steals a night.

The numbers are one factor, but big men that can defend carry extra importance because of the way the game is played today. The league is stacked with nearly unguardable wings, and the only players that can knock them off course are giants like Howard or Atlanta’s Josh Smith or even Cleveland’s LeBron James.

If you’re a guard and your job is to stop, say, Kobe Bryant from scoring, even if you do your job, you can’t avoid the inevitable.

“On the perimeter, no matter how good you are, you’re still getting scored on,’’ said Celtics coach Doc Rivers. “Perimeter players are good, so you can be a great defensive player and still give up 30.’’

Howard is only 24, so the notion is that his reign could last as long as he wants it to. However, the year Jordan won, he not only led the league in steals, he dropped 35 points a night. James immediately comes to mind as a player with that kind of ability.

“I think LeBron is always going to have a chance to,’’ Rivers said. “He does the same thing as Dwight. I’ve never seen guys flinch more making layups than when those two guys are playing.

“How many blocks did those two guys have from behind and how many guys have missed shots thinking LeBron was there? Those two guys, they’re athletically gifted and they have great timing. They’re tough.’’

Bring on the hate
If Quentin Richardson is a marked man in Boston, it’s a safe bet Miami won’t have a lot of love for Garnett when the series resumes there tomorrow night. But Rivers doesn’t think that is necessarily a bad thing.

Because Garnett had to sit out Game 2 with a suspension, Rivers was already expecting him to be in fire-breathing mode.

“I don’t know if he can get more fired up in a game,’’ Rivers said. “That’s just who he is, and we want him to stay that way. It’s important for him to play with that edge. And I think he’ll love being the villain because I think he enjoys that anyway on the road. Actually, I think most players enjoy that, pretty much.’’

Garnett has been Public Enemy No. 1 in a couple of arenas. Miami will be nothing new.

“I don’t expect any of us to get any cheers down there, and I’m no different from that,’’ Garnett said. “I’m not saying I’m the villain or the hero. I could care less.’’

Perk’s work
Kendrick Perkins dominated Jermaine O’Neal in the regular season and has continued to do so in the first two games of this series: O’Neal is 4 for 24. “Just keep a body on him,’’ said Perkins. “You can’t let him get deep post-ups, challenge all the shots, that’s about it.’’ . . . The playoffs are still young, but the Celtics have been the best defensive team, giving up just 76 points a night and holding the Heat to 39 percent shooting. The Celtics, who struggled with rebounding this season, have outrebounded the Heat, 87-73.