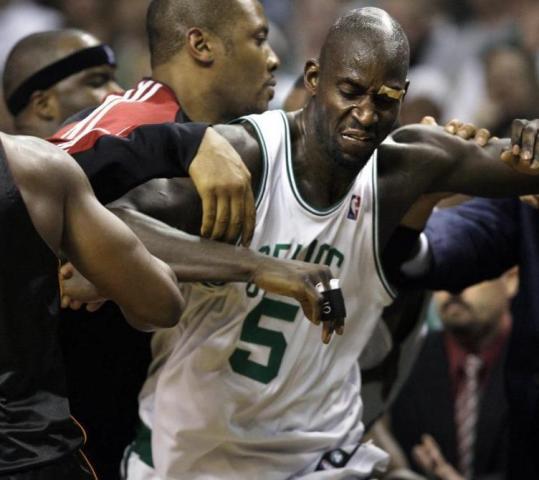 Kevin Garnett finds himself caught in the middle of a melee near the Heat bench late in Saturday night’s Game 1. (Elise Amendola/Associated Press)
By Julian Benbow Globe Staff / April 19, 2010

An injury kept Kevin Garnett out of last year’s playoffs. A late-game skirmish will cost him a game this postseason.

The NBA announced last night that Garnett, whose minutes the Celtics limited all season, preserving him for the playoffs, would be suspended for tomorrow’s Game 2 of the first-round series against the Heat. Garnett escalated an incident late in Game 1 Saturday after teammate Paul Pierce collapsed near Miami’s bench holding his right shoulder, with Heat forward Quentin Richardson later hovering over him.

Garnett initially nudged Richardson out of the way with his elbow, leading Richardson to get in Garnett’s face. The situation got more chaotic, with Garnett being ejected after elbowing Richardson in the face, and three other players (Richardson, teammate Udonis Haslem, and Celtic Glen Davis) being hit with technical fouls.

Garnett, who scored 15 points and grabbed nine rebounds in Boston’s 85-76 win, realized quickly how much his actions may have cost the Celtics, who now must attempt to take a 2-0 series lead without their defensive leader.

“I would just say you can’t let your emotions get the best of you,’’ Garnett said yesterday, before word of the suspension came down. “You have to sort of bite down a little bit and understand the situation you’re in. But it’s an emotional game. It’s a very high-intensity game. Everybody’s playing with those same high emotions on both sides and it’s aggressive out there. At some point you have to be in control of yourself.’’

Garnett maintained his intention was to help Pierce while Richardson, who was fined $25,000 for his role in the incident, was standing over Pierce, allegedly taunting him.

“I would hope that if I was hurt or if I was down in that position someone would at least give me some sort of space to re cover or to gather myself,’’ Garnett said. “That’s all I was asking for. Nothing more, nothing less.’’

Celtics coach Doc Rivers didn’t see a replay of the incident until yesterday morning, and he thought Richardson was out of line for standing over Pierce as he lay prone.

“He had no business over there,’’ Rivers said. “We had a guy on the floor injured. There was no reason for him to be there. And then, going by all reports, not only just the crowding, but it was the taunting. You’ve got a guy injured on the floor, I don’t think you should be standing over him [telling him] to get up, and I can’t even use the words he used.

“In Kevin’s case, when I watched it I looked at it differently. Live, I couldn’t tell because I hadn’t seen it, but just watching it to me, he was just clearing space. It wasn’t a punch and I don’t think he knew that someone was behind him.’’

Stu Jackson, the NBA’s executive vice president of basketball operations, explained his decision in an e-mail.

“Garnett was suspended for throwing an elbow that struck the head of Richardson,’’ Jackson said. “This action is analogous to a player throwing a punch that connects. By rule, a player swings his hand [with an open or closed fist], whether or not the hand connects, will be automatically suspended for a minimum of one game.

“The foregoing also applies to comparable methods of striking or attempting to strike another player [e.g. ‘head butting’ or elbowing above the shoulders]. This is the reason for his suspension.’’

Jackson also explained fining Richardson rather than suspending him.

Over the past three seasons, the Celtics have earned a reputation for bullying teams, and Garnett often has been the face of that intimidation. They had been called out for such behavior by Charlotte’s D.J. Augustin and Stephen Jackson, Washington’s Andray Blatche, Milwaukee’s Brandon Jennings, and Richardson while he was with the Knicks.

Chicago’s Joakim Noah, who said Garnett was once his favorite player, yesterday called him a “dirty player.’’

“He’s always swinging elbows,’’ said Noah. “I’m hurting right now because of an elbow he threw. It’s unbelievable. He’s a dirty player. It’s one thing to be competitive and compete. But don’t be a dirty player.

“He knows what he’s doing. It’s messed up. It’s wrong. It’s not right. And then after that to say . . . whatever, I shouldn’t even be talking about this stuff. It’s crazy.’’

The Celtics likely will start Rasheed Wallace at power forward in Garnett’s absence. Davis, who filled in for Garnett a year ago when a knee injury ended Garnett’s season, also likely will see his role increase.

Pierce was confident the rest of the team would respond with Garnett out.

“We know we can hold down the fort if KG is out a game,’’ Pierce said. “We’re not one of those teams that when the star player goes down that’s an excuse to not play hard, not try to win the game, and just be happy to come away with a close game. We’re a team that feels like with KG, without KG, we’re supposed to win a game. That’s our job, and that’s our mind-set.’’

Material from the Associated Press was used in this report; Julian Benbow can be reached at jbenbow@globe.com.